This winter was tough — coronavirus cases hit new highs, and national politics hit new lows. Many of us were isolated from friends and family and unable to participate in sports and extracurricular activities.

To help Vermont students, teachers and families endure this trying time, Kids VT and Seven Days organized an "At-Home" version of our Good Citizen Challenge. It included 40-plus activities that could be done from home, or in groups while masking and distancing, all organized into four subject areas: History, Government, Community Service and News Literacy. We encouraged parents, grandparents, teachers and mentors to work at it alongside the kids in their lives.

Reading about their efforts is just as exciting as spotting the green shoots rising from the ground!

Want to try some of these activities yourself? Find a list of them at goodcitizenvt.com, and sign up for email alerts to receive information about the next Good Citizen Challenge.

We gave away three prizes at the conclusion of the At-Home Challenge. Every team that completed one activity in all four subject areas was entered into a drawing for a $500 gift card to a locally owned business of their choice.

Favorite activities: "We really liked the VPR's 'But Why' and local history programs. This Is What Democracy Looks Like: A Graphic Guide to Governance comic book was a great way to learn about how our government works. Our favorite activity, though, was painting messages on rocks to leave around town."

The team that completed the most activities received a $500 donation to the local charity of their choice. We had two extraordinary teams that went above and beyond, completing more than 560 activities each!

Pierce's Peeps of Montpelier (561 activities). They chose to contribute their $100 prize to the Central Vermont Humane Society.

Team captain/teacher Melissa Pierce helped her students complete nearly every activity in the Challenge, from visiting a memorial in town to playing the GerryMander video game to creating their own newsletter. In a January email indicative of their energy and drive, she wrote, "Kids made cheer-up signs for our classroom windows AND listened to Brave Little State at the same time!"

The Malikians of Burlington (586 activities). When they grow up, these industrious fourth graders will be great citizens. Led by team captain/teacher Aziza Malik, they brought energy, enthusiasm and creativity to every task — including gathering donations for a nearby Little Free Pantry and writing and performing a rap promoting Green Up Day on May 1. They chose to split their $500 prize between two organizations, giving $250 each to Spectrum Youth & Family Services and the AALV. 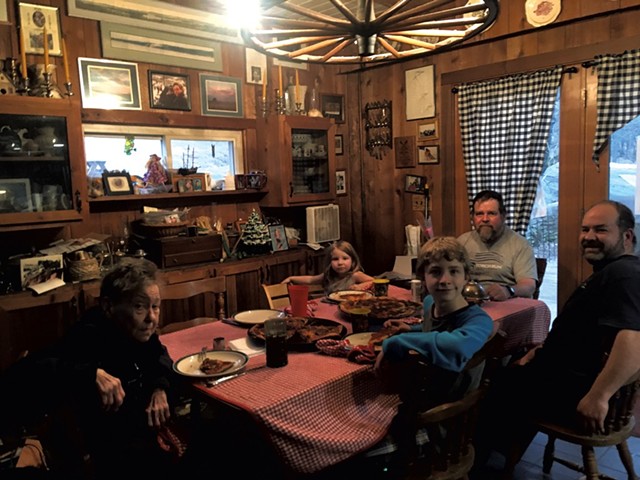 The Reading Homeschoolers — Taylor Smith, 12, and mom Sheri — participated in all five Virtual Vermont Trivia nights organized by the Vermont Historical Society on Wednesday nights in January and February. In fact, they set up a laptop at the dinner table and followed along while eating, joined by Taylor's dad, younger sister, Rose, and the kids' grandparents who live next door.

Taylor is a veteran of past Good Citizen Challenges. History activities are his favorite. "I really had a lot of fun, and I liked the different types of questions," he said of the trivia competitions.

To teach future generations about this time, the Vermont Historical Society created its COVID-19 Archive. We invited Challenge participants to upload photos, videos and memories to the archive for activity credit, and many of them did. Museum and education manager Victoria Hughes said that participants' submissions "will be helpful in telling the story of 2020 and 2021 from the perspective of children. We didn't have many that reflected their experiences before."

Some of the standout archive entries came from St. Albans' Oszurek Team. Mom Mary Jane submitted a video of Ethan playing piano and Sophia singing a pandemic-themed parody of Leonard Cohen's "Hallelujah." Ethan wrote the lyrics including: "Well, it goes like this, COVID-19, are you sneezing, are you coughing?"

Ethan's main takeaway from the Challenge: "You can make people feel happy and good by doing small things."

Many participants learned about and drew notable Vermonters from history, including Natalie Lyon of South Burlington. She submitted this portrait of Lucy Terry Prince, a former slave who moved to Vermont in the 1770s. A storyteller and poet, Prince was likely the first African American woman to argue a case in front of the Vermont Supreme Court. Natalie said that she chose to draw Prince because "she was a really powerful woman back when people didn't think that way about women."

In 2018, Ethan Sonneborn became the youngest Vermonter to run for governor — he was just 13 at the time. He didn't win, but a short documentary about his campaign, Ethan 2018, got rave reviews from Challenge participants. "It just inspired me so much — seeing a young person blow all expectations out of the water, and pursue something they think is important," said one Bumblebees team member. "It reminded me that it takes work to make adults listen, but when they do, people will listen. I don't really like politics, but this made me see hope for the future."

Older Vermonters, who needed to isolate to protect themselves from the virus, had a particularly difficult time this winter. This was especially true of those who live in rural areas. To help their senior citizen neighbors in Greensboro, siblings Leo and Amelia Circosta shoveled snow for them and checked in on them regularly.

They also delivered baskets of goodies like this one, pictured, which included homemade jams and relish, eggs from their chickens, dehydrated kale flakes — "which are better than they sound," notes 15-year-old Leo — and some frozen peanut butter cookies that could be baked later.

Many teams organized donation drives for local charities. Burlington's Team Mattina collected food for Feeding Chittenden. "Although everyone in the class participated," wrote team captain/teacher Kate Mattina, "the real rock star of this activity was Phoebe! She organized the entire drive, spread flyers throughout the school and her neighborhood, and made the delivery to the food shelf. She was a real community leader and we are so proud of her."

Team Tiki in Wolcott organized donations to the Hardwick Area Food Pantry. Blaine Randall, 6, chose the charity. "It was all him," said mom Laura Kaiser.

Laura put out a call for donations on their Front Porch Forum, and neighbors they'd never met responded, dropping food off at their house. They'd beep when they arrived, said Laura, and "We'd wave from the window" or help unload the items.

She said delivering the donations was a big moment for Blaine. "I think it was the first time he really had an experience where he could actually feel that he had an impact on the world," she said. "Things like that really sink in for children. I think he won't ever forget that."

Face masks were the must-have fashion accessory this season. Maeve Bald of the "We Are All in This Together" team from Brattleboro made dozens of them like these, pictured, which she gave away to various groups and family members.

The Davis School team in South Burlington also sewed a bunch, which they donated to the Ronald McDonald House in Burlington. The nonprofit provides a welcoming place for families to stay while children are receiving treatment at the University of Vermont Medical Center.

"We didn't want to forget about them," said teacher Lisa Goetz. Her multiage group of seven students worked on a wide variety of activities each Wednesday afternoon all winter. "Everything was so fun!" said Goetz. "This is the perfect give-back-to-the-world assignment."

It's basically impossible to ban screen time for teenagers these days — especially when remote learning depends on it. But digital-device makers and social media companies manipulate users' emotions in subtle ways, making their products addictive and difficult to put down.

The 2020 Netflix film The Social Dilemma explains this in a way that adults and teens can relate to; watching it was a News Literacy activity in the Challenge. St. Albans social studies teacher Kregg Kittell screened it over three days for the 60 seventh and eighth graders in his SACS Team USA.

"This activity was meant to be a jumping-off point for the students to really take a look at the effect technology is having on their everyday lives," he said. "The aha and 'yup, I've been there' moments during the movie were plentiful and poignant."

Kittell also had the students track their own screen time using an app on their smartphones. It forced them to see how much time they were actually online. Kittell marveled at "the looks on some of their faces when they started to realize, 'I spent four and a half hours on TikTok? No way!'"

Team captains who said they would participate in another Challenge
100%

Mark your calendar for Green Up Day on Saturday, May 1! If you send us a photo of your group participating, we'll send you a Good Citizen Challenge sticker.

Thanks for your support!

The Good Citizen Challenge would not exist without support from its primary underwriter, the Vermont Community Foundation. Since 2018, VCF's contributions have paid for marketing, promotion and administration of the Challenge, as well as most of the gift cards and donations we've distributed.

Good Citizen At-Home Challenge partner organizations suggested activities and promoted the Challenge to their networks. All of these entities are valuable resources, and we're incredibly fortunate to have them here in Vermont.