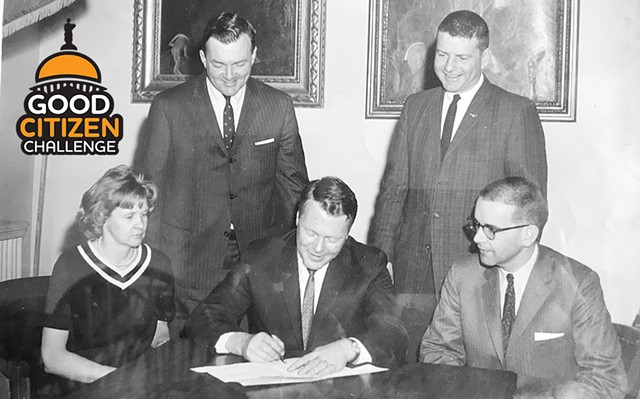 If you've lived or traveled outside of Vermont, you've surely seen plenty of billboards. These giant signs appear in red states and blue states alike, towering over farm fields and assailing passersby from atop skyscrapers. Today they're often digital and animated to catch your eye.

But you won't find any such outdoor advertisements in Vermont — the Green Mountain State outlawed them in 1968, one of only four states in the U.S. to do so; the others are Hawaii, Alaska and Maine.

Vermont's billboard ban was championed by a persistent Republican legislator and signed into law by a Democratic governor. The story behind its passage is instructive in this deeply divided time, an example of how government can work.

'A zealot' adopts the cause

Anti-billboard sentiment in Vermont dates back to the 1930s, according to a 2012 feature on the billboard ban in the Barre-Montpelier Times Argus. Writer Mark Bushnell explained that as cars became more popular, billboards aimed at drivers began to proliferate along Vermont roadways.

A number of social organizations spoke out against them, including the Rotary Club, the Grange and the Daughters of the American Revolution, but businesses and the farmers who profited from hosting them welcomed the signs. A 1939 law put some limits on them, but Bushnell noted that legislative efforts to ban billboards in the '40s, '50s and '60s all failed — "until Ted Riehle took up the issue."

The law is Ted Riehle Jr.'s greatest legacy. In 1997, the former lawmaker described its passage to Paula Routly for a feature in Seven Days: "I am no good at doing a bunch of things at the same time," he said, "but I can sink my teeth into something and go for it. That's exactly what happened with the billboard law." When Riehle died in 2008, the Associated Press gave him credit for the law in the first sentence of his obituary.

Riehle was a native New Yorker — an engineer, inventor, pilot and military man who served during World War II, as well as the Korean and Vietnam conflicts. In 1952, he purchased Savage Island in Lake Champlain. He also bought a float plane and started flying up to Vermont to spend weekends there; he moved his family to South Burlington in 1961.

Vermont Republicans soon recruited him to run for office in his Democratic-leaning district — and in a special election in 1965, he won.

Though Riehle was a lifelong Republican — and a Rush Limbaugh fan — he had a passion for environmental conservation. His eldest son, Ted Riehle III, describes his dad as "a little bit of a rebel" in his party.

Riehle believed that banning billboards in Vermont made good economic sense and would help attract tourists, remembers son Ted. "'He said, 'People come up here not to look at a billboard but to look at cows and mountains and a field.' He was a zealot about this issue."

'It was not popular'

Although the billboard ban is a beloved part of Vermont's identity now, many people initially opposed it. "It was not popular right out of the gates," remembers son Ted.

Riehle's law didn't just cover signs; it also banned flashing lights, such as those on the Flynn Theatre marquee and on directional signs advertising sales. Business owners were adamantly opposed.

Some even called it a communist plot to undermine the rights of property owners. A national group advocating for outdoor advertising got involved. "He knew he was up against big money," Ted says of his dad.

Ted remembers his dad receiving a call to the house from someone claiming to "make it worth his while" to kill the bill. Ted, like his father, served in the Vermont legislature and puts the debate in perspective: "It was almost as controversial, or even more so, than civil unions," he says, "just because it was people's pocketbooks."

Ted says his dad overcame the opposition by talking to people — a lot of people — and persuading them. "How he did it was one by one," he says. The elder Riehle met privately with fellow lawmakers at his Montpelier apartment. "I would not be surprised if it was over a cocktail or two," Ted quips. He also wooed journalists, according to writer Bushnell.

And Riehle spoke in public. Ted drove his dad around the state at the time to address all sorts of audiences; he says the elder Riehle spoke about the legislation on 125 different occasions. "It really was just going to every little group," he says.

Residents of southern Vermont were generally more receptive than those who lived north of Rutland. Ted recalls one particular appearance in the Northeast Kingdom when his dad instructed him to stay in the car and keep the motor running, in case they had to make a quick getaway.

Son Ted's wife, Helen Riehle, who has served in the state House and Senate and currently chairs the South Burlington City Council, remembers that her father-in-law found great success outside of purely partisan groups. "He went to every single garden club throughout the state," she recalls. "The garden clubs really embraced it."

And, she adds, "it was an easy listen." Her father-in-law was a charismatic guy, she says, talented, funny and a good speaker.

Support from both sides

In the end, House Republicans strongly supported the bill, and then-state senator Jim Jeffords helped get it through the Republican-controlled Senate. Ted notes that many Democrats at the time were wary of his dad and "didn't know what to make of him."

But he had support from Democratic president Lyndon B. Johnson's wife, Lady Bird. In a letter the First Lady sent him dated August 9, 1967, she wrote: "It is my hope that State and local officials as well as a beauty-minded citizenry will work together to preserve and restore the beauty of our land, and I am grateful for your efforts."

Ultimately, Democratic governor Phil Hoff signed the legislation. He realized that "this was far too important an issue" to be sidelined by politics, Ted says.

How can we cultivate this kind of approach in our current divided times? Helen suggests that we all need to "turn down the volume" on our political disagreements and to approach each other with "understanding and respect."

Good Citizen Stories is a series that celebrates Vermont residents who work together across partisan divides to make a positive impact on the state. It's part of the Good Citizen Challenge, a civics initiative from Seven Days and Kids VT that encourages participants to learn about history, government, community service and news literacy. The current At-Home Challenge, produced with support from the Vermont Community Foundation, includes more than 40 activities kids and families can do to learn about and practice being Good Citizens. Find details at goodcitizenvt.com.