Art Review: “NVAA: Past and Present,” works by members of the Northern Vermont Artists Association from 1930 to 2000. Bryan Memorial Gallery, Jeffersonville. Through March 15. 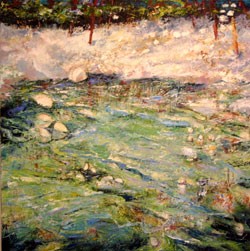 The vitality of the Northern Vermont Artists Association and the richness of its past are abundantly clear in these waning days of winter at the Bryan Memorial Gallery. “NVAA: Past and Present,” on view through March 15, is a two-gallery show of artworks by current and former members of the group. The NVAA’s annual juried exhibition, consisting this year of 115 works by 60 contemporary members, hangs in the Bryan’s East Gallery; a selection of 78 pieces by pre-1990 members appears in the Main Gallery. A view of these works puts to rest the myth that the NVAA is just for landscape painters.

Colburn’s 1958 “Variations on a Theme” is a family grouping containing portraits of alienation, quite uncharacteristic of the revered longtime chair of the University of Vermont art department.

The same sorts of individual aesthetic approaches emerge in the NVAA annual members’ show. While the Vermeer-like “Bread With Wine and Shells,” by Julie Y. Baker Albright, hardly distinguishes itself from virtually any top-notch realist still life, such traditionalism isn’t the norm here.

“Water’s Edge, Winter,” by Dorothy Martinez, is a 36-by-36-inch oil built with thick paint that Blair would have envied. The winter scene’s vibrant palette of turquoise and alizarin crimson, as well as a welter of whites, is highly original. Martinez’s nonobjective abstraction “Winter Blue,” of the same scale and similar chromatic harmony, won an NVAA Merit Award.

Susan Goodby’s “Champlain in Living Color” is a vibrant 24-by-36-inch collage that reads like a Byzantine mosaic. It earned another of the show’s Merit Awards. Goodby “painted” with varied scraps of brilliant paper, astutely leaving some slivers of negative space between the parti-colored shreds, and carefully treading the line between jumbled spontaneity and complex color harmonies.

Printmaker Lyna Lou Nordstrom contributes two different types of lithography to the show. “Paradise Found!” is a loosely rendered monotype with paper; its bright yellow background gleams under a complementary purple palm tree, while a butterfly and fine dark lines impart movement to the scene.

The paper lithography technique can incorporate photocopies and stenciling to create soft-edged images. Nordstrom’s “What a Trip!” employs traditional stone lithography to address, once again, the theme of a tropical vacation. Her bifurcated black-and-white composition presents the portrait of a guy in sunglasses on the left and palm trees on the right. Nordstrom’s skill with lithography is manifest in a wide array of visual textures and gradations of value.

The most whimsical works in the members’ show are certainly Robert W. Brunelle’s three “Aesthetic Machines.” The Rube Goldberg-esque contraptions are designed to be played with, and each involves dozens of brightly painted wooden knobs, buttons and geometric shapes. Situated on equally absurd pedestals, they stand up to 6 feet tall.

“NVAA: Past and Present” is the first offering slated for the Bryan Gallery’s 25th anniversary year; more shows reflecting Vermont art history are in the works. Given that the association has been holding annual juried shows since 1931, it’s apropos for the Bryan to start 2009 with this diverse and extensive exhibit.