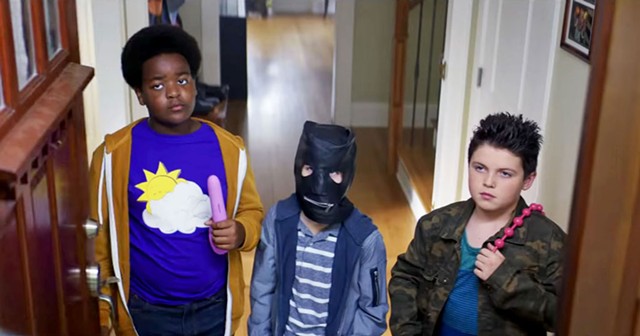 So, the truth is, they're not good boys. Or bad boys. They're boring, poorly written boys. I don't mean the three young stars of this fantasy-based fiasco, but the underdeveloped, completely unbelievable characters they play. Lazily and cynically conceived, this is the closest thing to a child labor violation ever released by a major studio.

It definitely does not help that the team the stoner moguls chose to realize their vision — or revision — consists of director Gene Stupnitsky and cowriter Lee Eisenberg, the guys who gave us Year One, the 2009 comedy that managed to pair Jack Black with Michael Cera and not produce a single laugh. Their price was probably right.

Let's just say these guys haven't exactly upped their game. Or their comic standards. As events unfold, one can practically see the filmmakers plucking random Superbad story points out of a hat to patch together into a script.

Jacob Tremblay stars as Max, a 12-year-old who's invited to a classmate's "kissing party." Just as Superbad revolves around three friends scheming to look cool at a classmate's party, Good Boys follows Max and best buds Thor (Brady Noon) and Lucas (Keith L. Williams) as they embark on a quest to learn how to kiss. That's their initial mission, anyway. The story quickly devolves into a haphazard succession of age-inappropriate gags.

Rogen played a cop in a Superbad scene involving an underage kid trying to procure booze. Years later, here's another scene involving an even more underage kid trying to do the same. The difference is that McLovin got a fake ID. Thor, by contrast, got done playing patty cake with Lucas on the playground just a few minutes earlier. Do sixth-grade boys really play patty cake? And tell each other, "I love you"? I'm taking it on faith that there are such things as "kissing parties."

Those aren't the only differences. Superbad was elevated by world-class improvisation and writing that captured the awkwardness of life in one's late teens. There isn't any ad-libbing here, world-class or otherwise. And the writing fails to capture anything beyond a vaguely pervy vision of preteen angst.

By the time we got to the scene in which the trio is forced to play in speeding highway traffic, I was thinking back to that trailer in which Rogen points out an irony: Because of its R rating, the three kids in the film won't be permitted to buy a ticket to it.

After everything they were put through, at last, a lucky break.

The original print version of this article was headlined "Good Boys"