Gone John: A New Era in the Vermont Senate After Campbell Calls it Quits 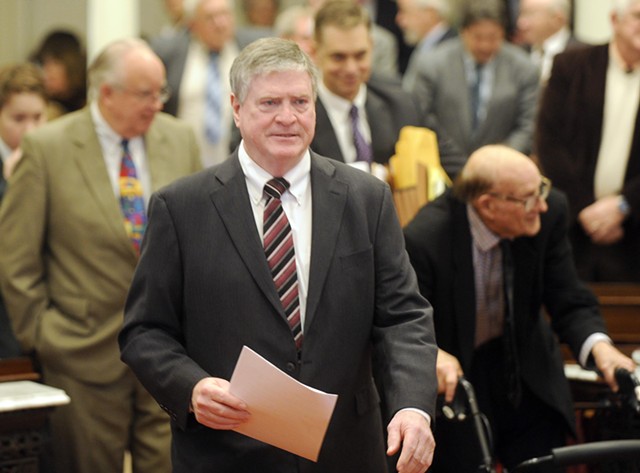 A few weeks after the 2012 election, Sen. John Campbell (D-Windsor) stood at the center of a Montpelier function room and apologized to his peers for his "shortcomings" as president pro tempore of the Vermont Senate.

Calling himself "a poster child for ADD," the Quechee attorney promised to get his act together and put an end to "the headlines of a dysfunctional Senate" that plagued his first two years leading the legislature's upper chamber.

"It was a personal embarrassment and one that, again, I'm not going to back away from," he told the 20 Democrats and Progressives assembled around him. "I was the one at the top, and I will take responsibility."

Even before he issued his mea culpa, Campbell had mostly quelled a revolt that had threatened his reign. After months of maneuvering, Sen. Phil Baruth (D-Chittenden) and Sen. Tim Ashe (D/P-Chittenden) had opted against challenging Campbell. Sen. Ann Cummings (D-Washington) would put up a token fight later that day, then lose to the incumbent in a caucus vote of 15-6.

As he nominated Campbell to serve another term, Baruth paraphrased the Cajun political commentator James Carville, calling Democrats "a party of second chances." The pro tem, he said, deserved one.

On Monday, after VTDigger.org's Mark Johnson revealed that Campbell would not seek reelection this fall, the veteran senator recalled that day in November 2012 when he had promised to change his ways.

"Some people thought it was a nice little speech I gave to get reelected. It was anything but," Campbell, 62, told Seven Days. "I did a lot of introspection, and I think I've grown as a person as a result."

In interviews Monday with 10 of his colleagues, nearly every one of them echoed that assessment.

"Obviously, he and I had some differences," Cummings said. "I think he got the message and has just improved immensely."

Said Sen. Dick Sears (D-Bennington), who frequently clashed with Campbell: "He really grew into the job of pro tem. I hate to see him go, but I understand that people have to make a living — and it is a citizen legislature."

Motivated in part by financial considerations, Campbell plans to trade his part-time gig in the legislature — and another job as a deputy Windsor County state's attorney — for a new one leading the Department of State's Attorneys and Sheriffs. He expects to complete his Senate term, which expires next January, but he'll begin his new job — three doors down from the Statehouse — as soon as the legislative session wraps up next month.

"It's a good fit," said Campbell, who got his start in a Florida sheriff's office and later served as a police officer.

The pro tem isn't leaving just for the steady paycheck. Rather, he said, he's exhausted by his 16 years in the Senate and doesn't believe he has what it takes to solve the state's most pressing problems, from health care to property taxes.

"There comes a time where you hear the same pleas, you make the same arguments, and then there's really not much change," he said. "And I think if we're going to move ahead, we need to have some fresh thoughts. So I think it's time to step aside."

Baruth, who has served as Campbell's majority leader for the latter four years of his tenure, was struck by his boss' comments.

"I thought the line of reasoning he laid out seems very heartfelt. It was honest in a way that was kind of arresting," Baruth said. "That's a level of candor people don't usually reach."

Campbell's words might apply to the entirety of the state's Democratic leadership. After six years in control of both the governor's office and the legislature, they seem to have run out of gas. Ever since Gov. Peter Shumlin abandoned his long-promised plan to enact a single-payer health care system in December 2014, he and his Democratic allies have sputtered along without much of an agenda.

So perhaps it's time for the changing of the guard that will take place next January when Shumlin, Campbell and House Speaker Shap Smith (D-Morristown) all leave office.

No matter who prevails, the Senate is likely to end up in better hands. Though his colleagues largely agreed that Campbell has improved as pro tem, few argued that he has mastered it — and several seemed to damn him with faint praise.

"He brought a lot of heart to the job," said Bray, who has tangled with Campbell over renewable-energy siting. "I'd say he's been passionate about his point of view, and I respect that. I guess that's really it."

After trying and failing last spring to undermine Bray's Natural Resources and Energy Committee on the Senate floor, Campbell told a reporter, seemingly without any sense of irony, "Sometimes it's tough to be a leader and a statesman." Later that week, as the House and Senate engaged in tough negotiations with the Shumlin administration over budget and tax bills, Campbell was MIA. Ever the backslapping bon vivant, he was spotted at a Montpelier bar.

Therein lies the Campbell paradox: He has generally delegated the tough work and thorny decision making to his top committee chairs — many of whom have been more than happy to fill the leadership void — but he has always reserved the right to sabotage their work product at the least convenient moment.

And to what end? Campbell's policy priorities and political worldview have never quite been clear. Speaking to Seven Days shortly after he was elected pro tem in December 2010, he cited single-payer health care as one of his top three goals. But well before Shumlin abandoned the plan, Campbell seemed to do his best to undermine it, repeatedly referring to it as too expensive and politically unpalatable.

Indeed, for a Democratic leader, Campbell spent much of his time at the top of the Senate fighting progressive priorities: physician-assisted suicide, decriminalization and then legalization of marijuana, childcare-worker unionization, ethics reform and renewable-energy development, to name a few. For years, he punted on paid sick leave legislation. But when he got a call from White House director of intergovernmental affairs Jerry Abramson last April, it suddenly became a top priority.

In an interview Monday, Campbell struggled to identify his greatest legislative triumphs during his time as pro tem. He eventually landed on water quality and child protection laws passed last session.

Even if he didn't always know what he wanted or how to get there, Campbell said he'd tried his best to go to bat for those who needed him.

"And, I guess most of all, someone who looked out for the little guy."

"The fact is that that kind of law wouldn't have prevented this situation," the former state senator said at the time.

Asked why he thought those buying guns through private sales shouldn't face the same scrutiny as those shopping in gun stores, he said, "I'm focused on things that will actually address the issues we're confronting today."

Days later, after two shooters killed 14 people in San Bernardino, Calif., Dunne seemed to soften his tone, saying, "I am open to a discussion of any legislation that could reduce the amount of gun violence in our state and around the country."

But he declined to answer repeated questions about whether he supported universal background checks.

So it came as some surprise when, at a debate last week in his hometown of Hartland, Dunne appeared to have changed his mind. Opponent Sue Minter, who has long supported the measure, answered a question about gun violence first.

"I believe the Second Amendment and gun safety can and must go hand-in-hand with commonsense laws like background checks," the former transportation secretary said, arguing that the latter would reduce domestic violence. "This issue is rampant. It's not talked about. I'm bringing it into the light, and I want to protect women in their homes and reduce suicides."

The third Democratic candidate, former state senator Peter Galbraith, turned to Minter and said he admired her for "sticking your neck out on this issue, against the supposed conventional wisdom."

"So my position is: I'm with Sue," Galbraith said, eliciting laughter from the audience.

Dunne gave a somewhat meandering answer, saying that while he used to believe that Vermont "was immune to gun violence," a recent rise in gun trafficking tied to drug sales had changed his mind.

"I have to tell you, our state is changing," he said, adding that he hoped to take "a holistic approach" to combating the two problems.

Asked by a moderator whether that meant he supported universal background checks, Dunne said, "Absolutely, but we need to go further and in a more integrated way."

In an interview this week, Dunne explained that he had come to that conclusion in recent months, after meetings with law enforcement officials and community leaders. He said he would soon release a "comprehensive community safety platform," which would include universal background checks.

Dunne wasn't quite ready to concede that he'd flip-flopped on the issue. He argued that, "in the context of the shooting that had taken place when we had the conversation ... I didn't feel that there was a need for it."

What about the A ratings he's received over the years from the National Rifle Association?

"I'll leave that to any organization to make a decision," Dunne said. "I make my decisions based on what I believe is in the best interest of the state and with the information that is in front of me."

The Minter campaign didn't think much of the change.

"We are glad Matt is finally on the right side of this issue, though the timing of his conversion seems political, especially given his past support from the NRA," Minter's campaign manager, Molly Ritner, said. "Vermonters deserve a governor with the conviction to stand up to special interests, like the gun lobby and the NRA."

Executive editor Gary Rutkowski retired last week after 40 years at the helm of the St. Albans Messenger. He'll be replaced at the top of the masthead by staff writer Michelle Monroe.

Publisher Emerson Lynn, who has owned the paper for 35 of those years, saluted Rutkowski as "a journalist with unimpeachable integrity" who was "indispensible" to the Messenger.

WPTZ-TV evening anchor George Mallet also called it quits last week, signing off Thursday night after five years at the Hearst-owned NBC affiliate. Mallet said he'd decided to let his contract expire so that he could look for a new job closer to his partner's family in the Midwest.

"This comes at a good time for me, professionally, because guys like me are, oddly enough, in demand right now," he said.

WPTZ president and general manager Kyle Grimes said he'll miss Mallett and is already on the hunt for a replacement. Interim anchors will join co-anchor Stephanie Gorin in the meantime.