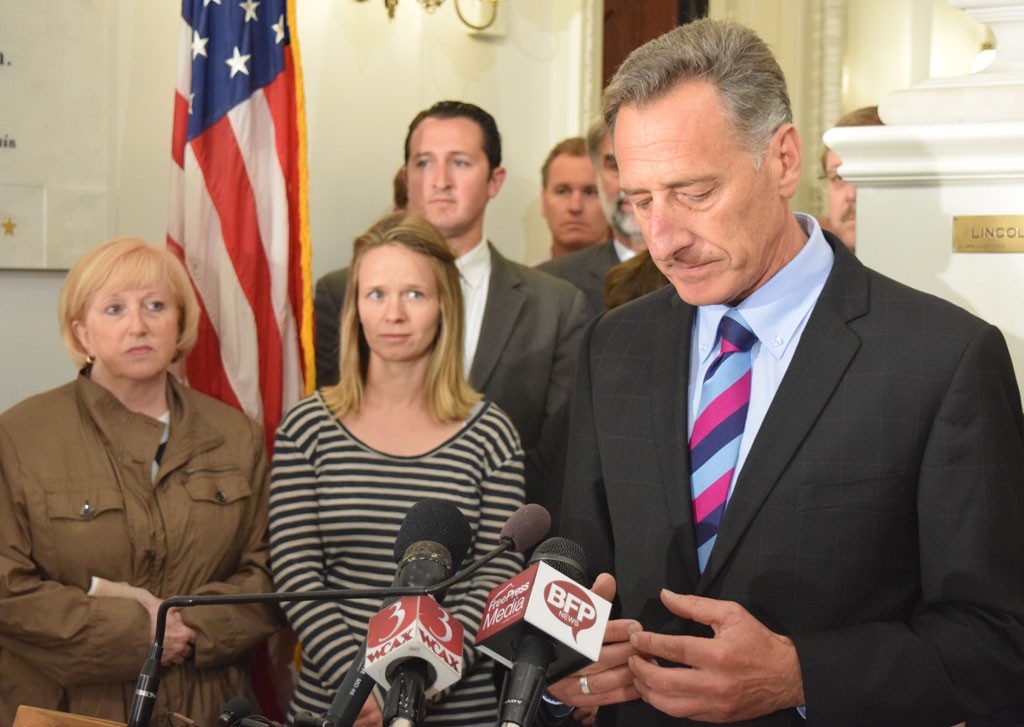 Twenty-five years ago, governor Madeleine Kunin plucked a young businessman from the Putney Selectboard and appointed him to a vacant seat in the Vermont House.

On Monday, the now 59-year-old Peter Shumlin followed his mentor's lead by agreeing to relinquish the governor's office after just three two-year terms. Just as Kunin did in April 1990, Shumlin found his ambitious agenda stalled by fierce fiscal headwinds and sagging popularity. And like his predecessor, the embattled Democrat saw a popular Republican opponent waiting in the wings, threatening to deliver a tough challenge.

Surrounded by close friends and advisers at a Statehouse press conference Monday afternoon, Shumlin said he'd spent the three weeks since the legislature's adjournment reflecting on his time in office. He said he'd come to the conclusion that he'd accomplished "the work we set out to do when I became governor." He had, in fact, exceeded his own expectations, he argued.

"I am announcing today for those reasons that I will not be a candidate for a fourth term in 2016," he said.

"I decided to make this decision now because I want these 18 months in office to be focused entirely on continuing the work that we have started together," he said. "And we have a lot left to do — a lot left to do."

No doubt there is some truth to that. The demands of a fourth campaign would be huge — and hugely distracting from his day job. With the first campaign-finance reporting deadline only a month away, he would have had to begin fundraising immediately.

But the timing of the announcement likely had more to do with Shumlin's desire to retire on his own terms. His most likely general election opponent, Republican Lt. Gov. Phil Scott, and even a few Democrats, such as former senator Matt Dunne, were already signaling interest in running. Had Shumlin forestalled such a decision, he risked appearing as if he was being shunted aside.

Even 'til the bitter end, the ever-competitive gov insisted he could win another term.

"I've just got to tell you: This is not driven by poll numbers. It's not driven by politics," Shumlin told reporters after making his announcement. "You know me: I love tough races — and I firmly believe if we'd run in a presidential year, we woulda won big. That's what I believe."

Shumlin may well have eked out a win had everything gone his way. But even he can't truly believe he would've "won big" — just as we could never believe his decision wasn't "driven by politics." Of course it was. With him, everything is.

Surely Shummy realized that even if he prevailed, the next 17 months would have been a horrific slog. Old friends would have abandoned him. Erstwhile allies would have opposed him. Dependable donors would have held out on him. Simply put, it would've sucked.

And to what end?

"If I had felt that another two years was necessary because there was something so burning that it required us to keep going, I would've done it," Shumlin said in a moment of striking candor during the question-and-answer period.

Indeed. By now, the governor has either accomplished or abandoned much of his original agenda. Gone are the sweeping promises of his 2010 gubernatorial bid, exaggerated and unrealistic though some of them were. He has instead moved on to the incremental improvements of governance — important, but hardly the stuff of 30-second television ads.

Consider the case of health care reform, the issue that made his political career and ultimately broke it. It was Shumlin's commitment to enact the nation's first universal, publicly financed health care system that differentiated him from his Democratic opponents in 2010 and warded off a Progressive challenger. It was a promise that, if fulfilled, would have made him a national star.

But his inability to deliver a functioning health insurance exchange, as mandated by the federal Affordable Care Act, robbed him of the political capital to get the job done. His ever-evolving rhetoric around Vermont Health Connect undermined his credibility with voters. And his unwillingness to choose between the liberal Vermonters who elected him and the prominent businessmen who bankrolled him prompted Shumlin to delay a decision on single-payer until late last year.

In the end, he couldn't go through with it.

The governor continued to insist he'd work to transform the state's health care system — even after Republican novice Scott Milne nearly toppled him last November and Shumlin waved the white flag of surrender on single-payer in December. But his efforts to impose a new payroll tax to reduce the so-called Medicaid cost shift were roundly rejected by the legislature this spring.

At Monday's announcement, the governor insisted his looming departure will not relegate him to the status of a lame duck. Of course it will. Legislators will divert their attention to their own electoral ambitions. Cabinet members will depart for more stable jobs — or to battle for his. The media will lose interest in what he has to say.

But Shumlin's decision is also an opportunity for political redemption. Instead of questioning his every motive, Vermonters may begin to believe him when he says he's simply working to better the state. The electorate will soon forget what it disliked about him and remember what it admired, as it does with every retired politician.

Just ask George W. Bush, who for the first time in a decade is now viewed favorably by more Americans than not, according to a recent CNN poll. Absence, as they say, makes the heart grow fonder.

Shumlin's problem was never a lack of accomplishment. Rather, it was his unshakable tendency to promise too much — and to under-deliver. When those promises fade from memory, Vermonters may well look back on the substance of Shumlin's record and realize he's got plenty to show for a lifetime in politics.

After Kunin announced her retirement in April 1990, a former state senator named Peter Welch decided to make another run for statewide office. Two years earlier, he had lost the Democratic primary for the U.S. House.

Welch, a Hartland attorney, won the gubernatorial nomination after Kunin stepped down, but he lost to Republican Dick Snelling, a former four-term governor from Shelburne.

Twenty-five years later, now-Congressman Welch is rumored to be considering another go at the governor's office. Though he hasn't said a word publicly, his longtime chief of staff, Bob Rogan, said Monday that his boss "will be taking the time he needs to thoughtfully consider how he can best serve Vermonters."

The opportunity is surely appealing. After nearly nine years in the nation's capital, Welch's odds of serving in the House majority, in a leadership position or as Vermont's next U.S. senator seem as long as ever. At 68 years old, why not cap off a career by coming home to run the state?

Publicly and privately, members of the Democratic establishment are talking up the possibility — however fanciful it may be — in part because he's the one candidate who might chase Scott, the Republican lieutenant governor, from the field. He'd certainly scare off most Dems.

If Welch stays put, well more than a dozen candidates — Democrats, Republicans and Progressives alike — say they will give the race a close look. No doubt countless others, too, will look into the mirror and say, "You're the one."

Possible contenders include just about every Republican who's run for governor in the past five years: 2010 nominee and former lieutenant governor Brian Dubie; 2012 nominee and former state auditor Randy Brock; 2014 nominee Milne and his Libertarian rival, Dan Feliciano, who now calls himself a Republican. Heck, maybe even retired Wall Street banker Bruce Lisman will finally enter the ring.

Among the only up-and-coming Democrats who have explicitly said they're not interested are Burlington Mayor Miro Weinberger and Sen. Tim Ashe (D/P-Chittenden).

No doubt other candidates will emerge.

While we're throwing names around, why not former governors Jim Douglas and Howard Dean? Why not prominent business leaders, such as Green Mountain Power CEO Mary Powell, Jay Peak owner Bill Stenger or restaurateur Al Gobeille, who chairs the Green Mountain Care Board? Why not Republican mayors Thom Lauzon of Barre or Chris Louras of Rutland? Or Burlington Electric Department general manager and Douglas administration alum Neale Lunderville? Or someone who hasn't spent her life salivating over the thought of higher office, such as Sen. Jane Kitchel (D-Caledonia) or Rep. Janet Ancel (D-Calais)?

Why not my dog, Gus?

Seriously, folks. If you thought the speculation season couldn't get any sillier, just wait for the domino effect: If Welch gives up his congressional seat, Scott surrenders his lieutenant gubernatorial perch or Smith bangs the speaker's gavel for the last time, those positions will open up, too. And then there's Attorney General Bill Sorrell, who may retire after 18 years in office — and all those cabinet officials who will likely have to find new jobs.

In other words, pretty much everyone in Vermont will be running for something!

It won't be clear for months — if not a year — who the true contenders for any of these seats are. Anyone who tells you otherwise is full of it.

What is clear is that Vermont is embarking on a generational changing of the guard — and that's good for more than just political columnists. It's an opportunity to ask some pretty existential questions.

Should Vermont's government continue to expand in scope and mission — or are we due for a period of retrenchment? Should the state continue to rely on its existing revenue structure — or should we be looking to dramatically raise or lower taxes? Did Shumlin go too far in reforming the health care system — or not far enough? Is the Vermont Progressive Party truly a statewide force? Will we ever elect women to higher office in this state?

For answers to these and other burning questions: Stay tuned.