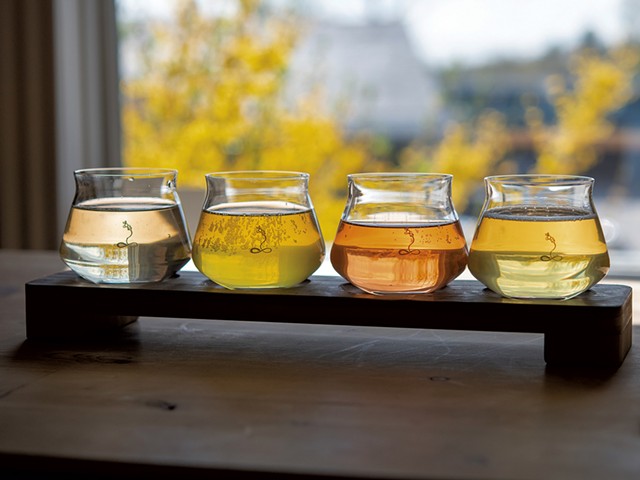 Golden Rule Mead's tasting room on Elm Street in Middlebury couldn't be in a much better place.

Addison County has long been the hive of beekeeping activity in Vermont. In their 2020 book The Land of Milk & Honey: A History of Beekeeping in Vermont, Bill Mares and Ross Conrad note that the state's very first beekeeping association was established in Middlebury in 1875. They write that Addison County "exemplified the matrix between bees, forage, fruits, and dairy cattle," which gave the area the reputation of a "land of milk and honey."

Golden Rule also exemplifies that matrix (dairy aside). Alexandre Apfel's meads celebrate local honey, herbs and fruit and are changing perceptions of what mead can be.

The ancient drink is not well understood. Despite the mead industry's steady growth over the past decade, the drink still has the reputation of a sweet medieval novelty. In the landscape of Vermont's craft beverage industry, though, mead makes a lot of sense.

Apfel's business is about as small as they come: It's just him. But with every batch of Cori Rose, Wild Light or High Mountain Tropics he brews, he passes on that consumer support to Vermont's beekeepers.

There are approximately 900 of them, according to the Vermont Agency of Agriculture, Food and Markets. Those beekeepers produced 282,000 pounds of honey in 2020, the USDA National Agricultural Statistics Service reported.

Apfel started working in Colorado's beer industry shortly after graduating from college. When he moved east to be closer to family, he ended up in Vermont working at Middlebury's Otter Creek Brewing. Several years later, while working the night shift at Shelburne's Fiddlehead Brewing, Apfel decided to strike out on his own — with mead, not beer.

"Night shift is a great time to ask yourself some really important questions," Apfel said with a laugh.

He wasn't a mead drinker, but he had started playing around with simple recipes at home. "All the homebrewing stuff I had accrued over the years was just empty, because being a commercial brewer is exhausting," Apfel said. "I didn't really want to do that on my time off, but I wanted something bubbling in my fermenters."

The first mead he made was "terrible," he admitted. But the second one worked, and the more he made, the more he found himself reaching for mead as a lighter option after a long night of brewing beer.

"I wound up appreciating that enlivening, sort of joyful buzz that I got from mead," Apfel said.

Apfel left Fiddlehead to start Golden Rule in 2019. That second recipe became twig, a wild maple mead that is now one of the company's six core offerings.

To keep costs down, Apfel moved out of where he was living. From May to November that year, he camped, couch surfed and crashed with his girlfriend. He's a minimalist by nature, he said, and being nimble saved him months of expenses while he was "bopping all around" and building his business.

One of his frequent destinations was Artesano Mead. Mark Simakaski and Nichole Wolfgang opened the first meadery in Vermont in 2008, and their classic, wine-like mead has led the way for the state's small mead industry. Artesano's mead was among the first Apfel remembers trying — and that impressed him. He brewed Golden Rule's first commercial batches at the couple's production facility in Groton.

Apfel established an alternating proprietorship with Artesano, using its equipment to produce larger quantities than his homebrewing equipment could handle — up to 240 gallons per batch. He scaled his recipes to fill Artesano's eight-barrel fermenters, aiming to sell Golden Rule entirely on draft.

That model appealed to Apfel because draft makes it easy for customers to sample before committing to an entire glass. But he encountered a problem: Restaurant and bar owners don't typically dedicate a tap line to a niche category like mead, much less to a new brand.

Golden Rule landed on the draft list at a few places, including Winooski's Mule Bar, Middlebury's the Arcadian, Bristol's Bobcat Café & Brewery, and two Burlington locations: Manhattan Pizza & Pub and Drifters. Still, Apfel realized at the end of 2019 that he needed a tasting room of his own for the business to survive.

He moved the company — and himself — into a big corner house on Elm Street in Middlebury on March 1, 2020.

Just weeks later, the pandemic closed restaurants and bars around the state, eliminating any hope Apfel had of his mead flowing through their taps.

"Looking back, I think I was going to face a much steeper climb trying to get on tap around the state," Apfel said.

While all of its meads are made from honey, none is sweet. They're dry, light, bubbly and packed with unexpected flavors.

Apfel uses tea — an "underrated brewing ingredient," he said — from Middlebury's Stone Leaf Teahouse, and herbs, fruits and vegetables from nearby farms. 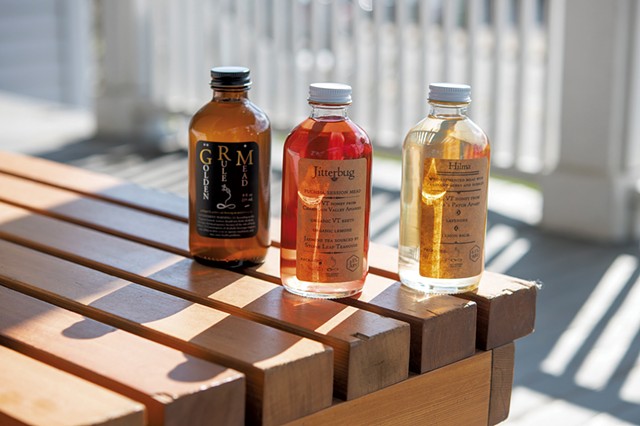 Apfel has a small brewing setup in the tasting room's basement for seasonal and experimental brews: a single kettle and a fermentation chamber that holds a few 15-gallon batches at a time. For larger batches, he maintains his arrangement with Artesano.

Tasting the meads blind, it could be hard to determine what you're drinking. That's especially true of Jitterbug, a 3.8 percent ABV session mead made with beets, lemon and jasmine tea; and of Hilma, a seasonal wild-fermented mead with lavender and lemon balm. These naturally carbonated beverages make a wonderful, locally produced substitute for mass-produced spiked seltzer, or a lighter alternative to beer.

Wild Light is among the simplest of Apfel's meads, ingredient-wise; it's just honey and water, fermented with a strain of wild yeast that he propagated from Champlain Orchards apples. The aroma hints at those apples with a vivid, tart, tropical-fruit flavor. It's easy to forget the drink is made from honey.

Some of the company's meads are slightly more potent, but they stay in an ABV range similar to beer. "You're not going to see very many Golden Rule meads that go over 10 percent," Apfel predicted. "I don't feel like there's any need for me to create something that's really intoxicating."

His meads are perfect for sipping on a porch on a sunny spring evening — and that's a delightful way to experience Golden Rule's tasting room, which finally opened inside at 50 percent capacity last month. Settling into the cozy blue couch on the wraparound porch with a sample or two of mead is like hanging out at a friend's house, if that friend could answer any questions you might have about brewing honey-based beverages.

The relaxed, welcoming vibe continues inside the tasting room, where Apfel has set up a simple bar with a small draft system, along with a few seating areas.

When curious customers stop in for a sample, Apfel first asks them what they like to drink. He'll guide cider drinkers to tart twig. Beer drinkers may appreciate the dry-hopped Local Hopper, which uses a blend of Cascade, Willamette and Centennial hops from Champlain Valley Hops. High Mountain Tropics is what he calls "the wine drinker's mead"; it tastes almost like a rosé, with a bit of tannin from black tea and hibiscus.

"I want it to be essentially a café, where people can come have a drink of something, hang out, chat, read, whatever," Apfel said of the tasting room. "Frankly, I think Middlebury needs the nightlife."

For now, the tasting room is open Friday and Saturday evenings from 4 to 8 p.m. Tastings for $5 include the six foundational meads. Apfel is planning a May Day celebration with extended hours, $1 off tastings and maybe even a maypole.

Compared with his hopes and plans for Golden Rule, Apfel sees the current version as "a drop in the bucket," but a huge expansion isn't his goal. "I want to be able to make a meaningful contribution to local agriculture and apiculture," he said. "I'll really know I've made it when I can hire someone."