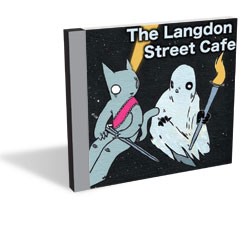 On Saturday, May 28, Montpelier’s Langdon Street Café closed its doors for the last time. In its all-too-brief six-plus years, the quirky nightspot and capital-city arts hub became an institution in central Vermont. It was a destination for small touring bands and the breeding ground for the city’s increasingly vibrant and diverse music scene. It was also a money pit. Ultimately, the java joint crumbled under the weight of overwhelming financial pressures. Apparently, there’s not a lot of money these days in bohemian hipster haunts.

But more than any of those things, Langdon Street Café was a community center, the home to a close-knit body of artists who now, for all intents and purposes, find themselves homeless. The Golden Dome Musicians’ Collective personifies that group, along with its recently formed imprint, State & Main Records. In an effort to ease the financial strain on the café’s cash-strapped owners, the collective has released State & Main Records: Volume 1.5, a download-only benefit compilation, and the follow-up to another comp, Volume 1, released earlier this year.

That first record showcased a surprising degree of variety in Montpeculiar, and Volume 1.5 picks up where the first one left off. Several of the contributors are the same, including rapper Boomslang, whose frantic flow on “Callin’ My Name” is balanced nicely by a coolly reserved turn from guest vocalist Greta Frost. Champagne Dynasty return with “Tropical Birds,” which sounds like what might happen if Digable Planets teamed up with Midnite Vultures-era Beck. Dan Zura offers a humble charmer, a sun-drenched piece of nostalgic electroacoustic pop called “Decemberland.” Sick Feelings kick out the jams on a scuzzy punk-rock homage to the Granite Center of the World, “Livin’ Is Tough, Man, Barre Is Hell.” And songwriter Scott Baker continues to impress in a variety of guises, first with Robyn Peirce as First Crush on the dreamy indie-pop stunner “Cast From Stars,” and again solo as Simple Heart on the rough-hewn “Sticks and Stones.”

But Volume 1.5 is defined by the new additions to the family, who highlight what the GDMC does best: a little of everything. B.B. Coyote sets a melancholy tone on “Yellow Bead (a lullaby for leo),” a wistful guitar and voice waltz that soothes with lazily dovetailing harmonies. Benvelope jolt the listener awake with lo-fi, fuzzed-out shake-and-stomp on “Gift.” “Just Friends” by That’s What She Said harks back to the glory days of early 1990s alt-rock. And Tiger Grip deliver a danceable electro-indie-pop on “Charm Bracelet.”

Sadly, the Langdon Street Café is gone. But thanks to the Golden Dome Musicians’ Collective, who embody its eclectic and community-oriented spirit, its legacy will live on.

State & Main Records: Volume 1.5 is available at stateandmainrecords.bandcamp.com. All proceeds go toward the closing costs of the dearly departed LSC.