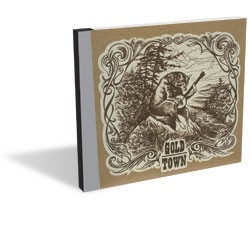 Warning: This review is gonna be a little confusing. In 2010, southern-Vermont-based whiskey-grass architects Gold Town released their debut EP. That CD was a rugged little collection of pop-infused whatevergrass that charmed with casually loose instrumental performances and equally laid-back, back-porch songwriting. Also, it was self-titled. Flash to the end of 2011. The band is back, this time with a debut full-length, 12 tracks of new material that picks up right where the EP left off, and builds on the budding promise of that first attempt. Oh, and it’s also self-titled. If I may … WTF?

What to call an album is always an interesting decision. And you can often glean something about what’s in store by ruminating on a record’s title. For example: Tom Waits’ The Heart of Saturday Night. Before you even hit “play,” you know it’s probably going to be an album filled with boozy, late-night laments. And it is. But the choice to self-title an album can be equally revealing. In some cases, it’s an introduction, a declaration of identity — “Here we are, ya dig?” In others, it’s a decision veering closer to laziness — “So, uh, what the hell do you guys wanna call this thing?”

The band’s (initial) debut, while not perfect by any stretch, hardly required a mulligan. It was a roundly solid first attempt and tantalizing glimpse at the group’s potential, if it had more time to develop. And that is exactly what the band has done.

By any name, Gold Town’s sophomore release is a stunner. In moments — as on the tender waltz “Hometown” and stirring closer “Hard Times,” especially — the group shows graceful sensitivity, displaying maturity that outstrips anything on its EP. In particular, lead songwriter Andrew Stearns has corralled a once-unwieldy poetic streak and is developing a refined, powerful and unique voice.

In other moments, Gold Town (the band) gleefully roll up their sleeves and deliver hoedown-worthy barn burners. But where they previously relied on youthful zeal to carry such instrumental dalliances, favoring energy over elite picking, here, too, they have evolved. No one will ever accuse Gold Town of virtuosity. But there is marked improvement in the performances of each of the four full-time players, without sacrificing any of that infectious energy.

William Mosheim proves an excellent banjoist, especially on the roiling lead cut, “Workingman’s Dawn.” Joshua Loun’s bass work is subtle but substantial — as it should be. And Michael Wheeler’s resonator licks on tracks such as “Early Morning Blues” — which features a nice guest turn from local blues harpist Bob Stannard — are lithe and efficient.

As the line goes, a rose by any other name would smell as sweet. Gold Town (the full-length album) is equally a treat for the senses, whatever you want to call it.