Going With the Grain 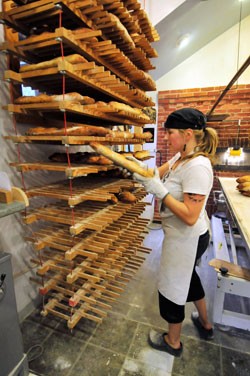 Watching Blair Marvin and Andrew Heyn shape, slash and hoist loaves of bread in their bakery is dizzying. As their apprentice baker, Josh Bellamy, swings the eight-foot handle of a peel through the room without bumping his colleagues, Marvin swiftly scores the tops of pain au levain on a conveyor belt, and Heyn loads squishy loaves of maple-cinnamon dough onto trays. The frenetic ballet belies Marvin’s description of Elmore Mountain Bread as “slow-made food.”

What is slow — and what lends their bread its flavor — is the amount of time their breads are leavened. The first time I purchased a loaf of Elmore Mountain Bread, the crust of Seven Grain loaf was dusted with flour, rough but powdery to the touch. I expected a dense, grainy interior; instead, as I broke it with my fingers, the inside was as puffy as a cloud, a moist swirl of nutty and somehow ancient-tasting dough. I ate a third of it before I got home.

A loaf of Country French had the same rigid crust, an even more cloudlike interior and the same layered, complex, slightly sour flavor. It was close to the best bread I’d ever had. What made it so good? I had to find out.

Marvin, 31, and Heyn, 36, are used to getting calls from the curious, whom they usually invite up their bumpy dirt road in Elmore to see their bakes in action. For seven years, the couple has toiled here in a cozy bakery beside their shingled, chocolate-colored house, surrounded by piles of wood.

Unless you live in or near Lamoille County, or have a Pete’s Greens CSA share, you may never have tasted Elmore Mountain Bread. It makes its way down the mountain to a tight ring of neighboring cafés and markets, but Heyn and Marvin have gently deflected requests to cart it farther afield — with the exception of their partnership with Pete’s in nearby Craftsbury. “Instead of going farther, we want to get more people close to us to eat good bread,” says Marvin, clad in a flour-covered apron, culottes and clogs.

Marvin grew up in nearby Johnson, but moved to Seattle a decade ago to attend culinary school. There she met Heyn, who was also studying the culinary arts. In late 2003, while paying a winterlong visit to Marvin’s parents — and working in Stowe restaurants — the pair learned through the grapevine that a man named Dave Deciucies was looking to sell his bakery up on Elmore Mountain.

Neither had ever thought of themselves as bakers. Marvin always imagined she might eventually own a restaurant. “I slept through all of my years of baking and pastry,” says the chef-turned-baker, whose late restaurant hours rendered her a “zombie” in most of her morning baking classes.

But they were not immune to the allure of a well-rendered baguette or loaf. Following their instincts, the pair bought the house, the bakery and the accompanying 10 acres of land. “It was totally in the stars,” says Marvin. “We never went back to Seattle. It was kind of the vacation that never ended.”

Deciucies had been baking 200 loaves a day, mostly naturally leavened Country French (pain au levain) and baguettes prefermented from wild yeasts that lend the loaves their rich flavor. He passed his sourdough starter — a yeasty-smelling sponge of whole wheat, rye and oat flours — to the newcomers. A starter needs constant “feeding” to stay alive, they soon learned. “That was our first child,” jokes Marvin. “We would go on vacation and take the starter with us.”

At first, the couple — who married in 2005 — thought they would trade off on bake days, each pitching in to mix, knead, shape and bake. Quickly, they learned that they both had their own strengths: Heyn was more math oriented, so mixing and measuring fell to him. Marvin did all the baking. “We both got really, really good at what we do,” she says.

As they began to ace their craft, they also tweaked formulas and tried to innovate. Elmore Mountain’s loaves are a blend of two wheat flours — including one from Québec’s Meunerie Milanaise — water, sea salt, and sometimes other grains such as flax, rye and barley. Heyn and Marvin have built on that formula to add new flavors, from a rosemary-olive loaf to focaccia to a Brewer’s Bread with spent barley mash and Ridge Runner Ale from neighbor Rock Art Brewery. They created custom loaves for Pete’s Greens, including a honey-oat bread and a Québec flaxseed bread. They formulated “Foagies,” or unctuous, sandwich-sized focaccia squares; and Kalamata Olive Fougasse, a subtly spicy flatbread studded with olive bits and sculpted into the shape of a leaf. “We designed our breads to appeal to lots of different palates, from a 4-year-old to a health nut,” says Marvin.

Not surprisingly, their bake days grew epically long. They also began to outgrow their oven, which had been designed by brick-oven-baking guru Alan Scott. “We basically beat it to a pulp,” says Heyn. They dreamed of a new design, one that could shorten baking times, render consistent loaves, circulate enough heat to give their loaves ample “crust and tear,” and still accommodate a mechanical loader. It was an ambitious vision, since loaders are not generally paired with wood-fired ovens. But in 2009, the couple enlisted William Davenport of Burlington’s Turtlerock Masonry Heat to try his hand at a new design.

“When they approached me, I had been anxious for a while to build another [kind of] oven and solve some of the design challenges that were there,” says Davenport. “Fundamentally, it was a basic design challenge: How do we build an oven that lets Andrew and Blair bake at the same rate, and still sleep at night?”

Davenport eventually constructed a 10-by-6-foot brick-and-stone oven along one side of the couple’s house, fronted by three narrow steel doors that ease loading and unloading. The first time Heyn and Marvin used it, it shaved two and a half hours from their baking time. “It’s the next generation of wood-fired ovens,” says Heyn.

On the evening before one of their bake days — typically Monday, Wednesday and Friday — Heyn stuffs logs and slab wood into the oven’s slim mouth and lights the pile. The fire builds through the night, heating the oven to around 900 degrees.

Before he goes to bed at 9 p.m., Heyn will mix sourdough starter and poolish (preferment for baguettes). Six hours later, he’ll get up to mix dough and shape loaves. By 9 a.m., the fire is out, the oven’s heat has fallen to 620 degrees, and the bakers sweep three cups of ash from its interior. Then they crank up tunes from Seattle’s KEXP on a computer whose keyboard is coated in flour.

Inside the oven are eight thermocouples that measure the temperature around the loaves as they bake. As they monitor the temperature, the couple and Bellamy start the “time-sensitive dance” of loading loaves at various heats. First, sheets of focaccia are quickly baked. Then, long dough batons go in on the loader and emerge 12 minutes later as crackling, slightly charred baguettes, most of them destined for restaurants. Next come wavy tangles of Kalamata Olive Fougasse. Once they’re browned, the trio loads the belt with ovals of Country French, on which Marvin slashes a design before they, too, disappear into the oven.

The cooled loaves — up to 700 per day — are bagged at about 2 p.m. and loaded into the pair of Honda Elements that Heyn and Marvin use for deliveries. Though they constantly get calls from potential clients, they keep their route small. Bread is meant for neighbors, they agree, and both like to meet their consumers face to face. “To have a rapport with people is a really nice way to wrap up a long day of baking,” says Hehn, who lingers and chats during deliveries.

One stop is the local Hannaford in Morrisville. Another is the Bee’s Knees, also in Morrisville, where Marvin used to work in the kitchen and for which the couple bakes an extra-broad baguette they jokingly call a “double-wide.” Elmore Mountain Bread is all over the restaurant’s menu, from the sandwiches and flatbreads to the base for a roasted pear topped with local chévre and honey.

It’s also on the table alongside other local breads at Claire’s Restaurant & Bar in Hardwick. “It’s really good bread. Blair and Andrew’s skill and love for what they do can be tasted in every bite,” writes chef Steven Obranovich. “From their fougasse, which is as good, if not better [than], what I’ve had in the South of France, to their baguettes, which could easily go up against any Paris boulangerie with just the right amount of crust and salt, the proof is in your mouth.”

Last fall, the couple fielded a curve ball: They learned Marvin was pregnant. “We wondered, How do people with a crazy life do this with a baby?” she says. All of their hands are vital on a bake day.

So they took on an intern, Bellamy, who had a baking certificate from the New England Culinary Institute. He stayed on as a baker as Marvin’s growing belly started bumping against the loader.

Now, cherubic, 4-month-old Phineas bounces up and down in a chair attached to the ceiling as he watches his parents — and flour — fly about the room. If he begins to fuss, Bellamy takes up the slack. “He’s saved our butts in a big way,” says Marvin.

Heyn and Marvin may not be expanding their distribution, but they stay busy. Soon they will start making honey-oat bread for their commercial clients, and they continue to welcome bakers from around the country who want to see their oven in action. Even on their nonbake days, they stack wood and figure out ways to streamline their production and broaden their line. “It’s definitely an all-encompassing lifestyle,” says Marvin, bouncing Phineas on her hip.

Those who can get their hands on Elmore Mountain Bread likely will agree that the toil pays off.