Going with the Grain: Sam's Wood Furniture Rebuilds Itself

On Monday, Sarah Coates sends furniture orders to her builders from her office — or her yoga mat — in her Connecticut home. On Wednesday or Thursday, she makes the drive to Burlington. There the 37-year-old stays through Sunday to take care of her business, Sam's Wood Furniture.

The seventh-generation Vermonter was living in Colchester when she and her husband, Peter Cowenhoven, bought Sam's in 2012. Then called Sam's Unfinished Furniture, the store had been around since 1967. The Old North End storefront was crowded with bare-wood tables, chairs, beds and so on waiting for new owners to slap on paint or varnish and welcome them home.

Since Coates' takeover, a lot has changed. She moved to Connecticut with her husband and two kids a year and a half after buying the shop, because Cowenhoven received a job offer they couldn't resist. But that didn't stop Coates from flipping the furniture business on its head.

Today, Sam's sells mostly custom-finished items. Equipped with a new website, it's expanding online sales outside Vermont. Coates has bulked up her roster of Amish builders in Indiana, Ohio and Pennsylvania — who do most of the finishing work — and started a service installing custom wall units. Those, she estimates, make up 30 percent of the business.

Through all this, Coates has kept the same location — on the triangle of land where North Willard Street and North Winooski Avenue meet Riverside Avenue. But the store has a whole new look and feel. When she first toured Sam's, Coates says, it had a major warehouse vibe. "There were three nightstands stacked on top of each other," she recalls. Now it presents furniture in the country-chic vein in layouts that incite the imagination.

The smell of fresh wood permeates the air. Colorful comforters cover the beds. Placemats and soup bowls top a salmon-painted kitchen island, and a woven blanket hangs off the edge of a wooden bench.

Coates attributes these arrangements to her manager, Maria Merrill, who came from a job at Tempo Home Furnishings. Coates herself has no background in sales or marketing — but she does in economics. She met her husband while running the operations department at Massachusetts-based Montis Financial in 2003. Cowenhoven was a partner at the firm.

In 2011, the couple moved to Vermont and started a satellite office for Montis in Burlington. The move didn't work out as planned, Coates concedes. So they resigned and bought Sam's a year later.

"We weren't looking for this [specific business]," she says of the purchase. "It was just available."

Initially, the real estate was what attracted her. "I've always wanted to be a real estate investor," Coates says. "The opportunity to own commercial property in a growing section of Burlington was extremely enticing to both Peter and me."

And once she walked into the store, she fell in love — with the product.

"There's a lot of transparency in all the pieces we sell," Coates says. "It was a product I could get behind."

Of course, faith that something will sell isn't enough to make others buy it. When Coates bought the store, she says, business was "down." So she switched gears.

"The models that worked for people in the past do not work for people today," she declares. "You have to have an online presence; you have to have prices on your website." Not to mention, Coates adds, "People know what they want, and they want someone to do it for them."

Meaning that, these days, people don't necessarily want to buy a piece of furniture and have to paint or finish it themselves. 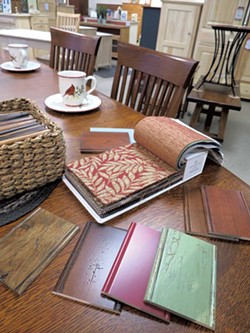 Hence Coates' decisions to switch from primarily unfinished to finished furniture and to up the presence of Amish-built furniture in the store, which now accounts for about 80 percent of the inventory. "I like working with [the Amish builders]," she says, because "they stand 100 percent behind their product."

Coates cites the quality of the craftsmanship and fair price points for both unfinished and finished products as major motivators for repping Amish builders.

"I talk to the builders," she says. "I know them — I've visited their homes. These are real people, and I'm proud to sell [for them.]"

As for her customer base, Coates says that's shifting, too. "We're really tapping into a new demographic," she notes. When she bought Sam's, most of the customers were older. Now, Coates says, "We're seeing 35- to 50-year-olds, more affluent [people] and first-time home buyers."

Coates spends much of her time in Vermont visiting clients' houses and taking measurements for Sam's custom wall systems, which are built off-site and then reassembled in the home.

The current model seems to be working, but this entrepreneur isn't getting comfortable. "I have a mentor who owns a store in Chicago," Coates reveals, "and he says, 'Whenever you think you've got it figured out, slap yourself.' You always have to be ready to adjust."