Going to the Mountain

What attracts so many spiritual seekers to the tiny town of Lincoln? 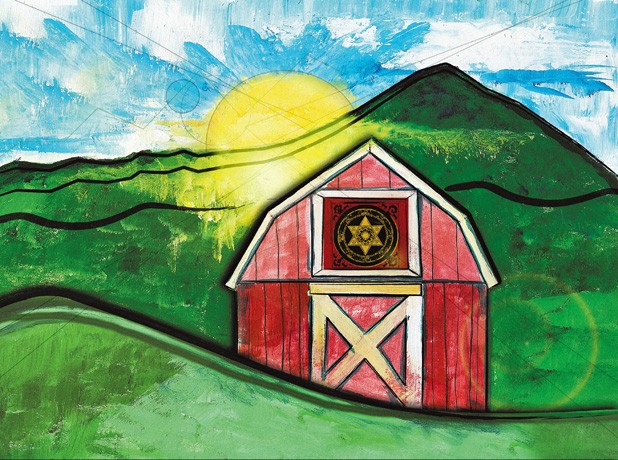 Lincoln, Vt., is a slender spur that pokes into the northernmost section of the Green Mountain National Forest, southeast of Bristol and just over the mountain from Sugarbush. The New Haven River snakes north through Lincoln from its headwaters on Bread Loaf Mountain, following the main road. The town covers 44 square miles and is home to about 1200 residents, a figure that has increased only slightly in the past two decades.

Lincoln isn’t one of those towns you might happen upon while traveling elsewhere. It’s not en route to anything, unless you’re trying to get to Warren the hard way: by climbing up and over the precipitous Lincoln Gap. Lincoln is the end of the road. Author Chris Bohjalian, who moved there from Brooklyn 25 years ago, explains it like this: “You go up River Road 3.4 miles into the forest, and all of the sudden it’s like Brigadoon or Shangri-La,” he says. “Here’s this beautiful New England village.”

Only, unlike those mystical utopias, Lincoln exists. If you find yourself in Lincoln, it’s not by accident; it’s because you meant to arrive there.

Over the years, scores of people have found their way to Lincoln, drawn by something more than just the town’s charm and quintessential New Englandness. It’s no exaggeration to say there’s a spiritual pull to the place, bringing seekers to its foothills even before the Quakers arrived in 1795. In the time since, in addition to traditional Christian congregations, Lincoln has welcomed Tibetan and Shingon Japanese Buddhists, New Age dream interpreters, Native American elders, renowned dowsers, a meditation society, contemplative ecologists and students of yoga.

Today, Lincoln is a spiritual locus, home to the Vajra Dakini Nunnery, a Tibetan Buddhist monastery; Sunray Peace Village and Meditation Society, a community built on Native American teachings and Buddhist beliefs; the Drikung Dzogchen Community of Vermont, a Tibetan Buddhist practice group; and Metta Earth Institute, a holistic retreat center focusing on contemplative ecology. Each attracts legions of devotees to the town.

To understand Lincoln’s magnetism for many a seeker, we need to take a trip back in time. Before the Quakers founded this settlement, indigenous communities of the Northeast, including the Abenaki, Mohegan, Narragansett and Wampanoag people, often descended on the area around Mount Abraham, the 4017-foot peak due east of what is now the town center.

The mountain was considered a sacred meeting place where people could share information about weather and planting, dreams and visions of the future, says Venerable Dhyani Ywahoo, a Cherokee spiritual teacher and leader of the Sunray Meditation Society. Ywahoo’s elders, who moved to the area in 1980 from New York City, called Mount Abraham “Odali Utugi,” or Hope Mountain in Cherokee.

Fast-forward from precolonial America to the 1960s, when many spiritually minded people landed in Lincoln. One of those was a man named Dutch Leahy, who brought with him a practice of Tibetan Buddhism mixed with a psychedelic exploration of the boundaries of consciousness, explains David Arndt, coordinator of the Drikung Dzogchen Community.

In 1980, Ywahoo and her extended family were called to Vermont by a “spiritual direction.” “My grandparents foresaw that we would leave the cities and return to living in a more native way, and that’s what brought us here,” Ywahoo says. “It took us a while to get to Lincoln. It was like we, as a community, needed to prepare ourselves to make our way to the sacred valley.”

Ywahoo recalls dreaming about Lincoln Valley as a child. She would ask herself if the place in her dreams was heaven, because it certainly didn’t look like Brooklyn. In the dreams, Ywahoo would see a woman driving through an archway of trees on the town’s central Quaker Street with a wolf over her shoulder. Once she reached Lincoln, her dream seemed to come to life.

“I was taking my pet to training, and I noticed he was looking over my shoulder as I came down Quaker Street through that beautiful underpass, and I realized this is what I used to dream,” she says. “So the valley certainly has had a call on me. It brought me here.”

Lincoln may owe its aura to its unusual orientation — it is something of an alpine plateau, nearly surrounded by peaks. Think of the town’s nucleus as resting at the bottom of a wide, deep bowl. Gently, without much fanfare, mountains rise around this core to create the sides of the bowl. The effect is dramatic, suggesting a geological fortress. Not that the town needs ramparts — its pacifist Quaker roots run deep.

Students of geomancy, a form of divination using lines, figures and geographic features, say Lincoln has unique attributes — such as the shape of the land and flow of the river — that indicate its sacredness. One of those features is the annual autumn appearance of the rising sun in the notch on Mount Abraham, indicating that waters that run off the mountain are energizing and that prayers made in that area will have special resonance throughout the universe.

In the mid-1980s, a major figure in Tibetan Buddhism, His Holiness Chetsang Rinpoche, used divination to seek out Ywahoo and her community. When he arrived in Lincoln with a coterie of monks, he went for a hike and determined that the formation of the land — the higher-altitude plateau ringed by mountains — represented female spirituality, says Khenmo Drolma, the abbess of Vajra Dakini Nunnery, which is affiliated with Sunray.

In his 2010 biography of Chetsang Rinpoche, From the Heart of Tibet, writer Elmar R. Gruber recounts the spiritual leader’s experience in Vermont, including his exploration of the cave behind Bartlett Falls. During one of his visits, Rinpoche determined the cave to be sacred based on the presence of sindhura, a type of reddish or yellowish earth used in Buddhist rituals.

“Rinpoche was struck by an unusual topographical conjunction in which river courses, together with the shape of a mountain, create an extraordinarily radiant image of two triangles crossed together,” Gruber writes. “In the Tibetan tradition, certain mountains and rivers that create crossed triangles are regarded as the mandala of Vajrayogini. They are called chöjung (triangles of arising), and are the source of existence, the well-springs of the feminine principle.”

It is because of these so-called female characteristics that the nunnery was sited in Lincoln, says Drolma: “The female Buddha practices fit where we’re living in this particular monastery.”

Sunray and Vajra Dakini Nunnery aren’t the only Buddhist groups that have been pulled into Lincoln’s vortex. From 1987 until 1999, the Mandala Buddhist Center, founded by Shingon teacher Acharya Ajari Tanaka, was located in Lincoln in a rambling Quaker farmhouse in the shadow of Mount Abraham. And since 2001, the Drikung Dzogchen Community has been headquartered in Lincoln.

In the 10 years of its existence, Drikung Dzogchen has hosted 80 events featuring renowned Buddhist teachers at village meeting halls in Lincoln and Bristol. Many of those teachers, says group coordinator Arndt, experienced similar energy in the town to that found by Chetsang Rinpoche.

It’s not just eastern spirituality that has found a home in Lincoln. Traditional Christianity has long been part of the community. Randy Rice, a former missionary and associate pastor of the United Church of Lincoln, moved there with his wife 21 years ago. It didn’t take them long to feel the town’s strong sense of community, which Rice describes as a “we-ness.” But more than that, it seemed like there was something special about the physical place, perhaps the protective presence of its biblically named mountain.

“We always felt there was a good vibration in Lincoln,” Rice says. “I don’t know how else to put it. The center of Lincoln is like a bottom of a bowl. Things feed to the center of town, and there’s this natural grouping of geography.”

Rice attributes the overarching religious and spiritual tolerance of the town to its Quaker heritage. It took a while, he says, for longtime residents to cotton to new groups moving in, but they all seem to make it work now.

“I think there’s something about the Quaker ethic of being a good neighbor,” he says. “I think that really hovers in the air or is embedded in the dirt of Lincoln.”

Gillian Kapteyn Comstock, one of the cofounders with her husband, Russell, of Metta Earth Institute, has experienced that neighborliness since moving to Lincoln in 2007. One of the couple’s neighbors, a dyed-in-the-wool Vermonter named Chuck Norton, has helped them hay their fields since they moved in.

Metta Earth Institute was founded as a retreat that focuses on sustainable living, environmental activism, and a contemplative life replete with yoga and meditation practice. While not dogmatically religious, Comstock is interested in exploring the spiritual in everyday life and felt drawn to Lincoln by the town’s supposed atmospheric conductivity. She likens Lincoln to Crestone, Colo., a minuscule village in the western foothills of the Sangre de Cristo Range, which has become a haven for many spiritual groups and boasts a Hindu temple, Zen center, Carmelite monastery and several Tibetan organizations.

“It does seem like there are energetic geological forces,” Comstock says of Lincoln. “There are definitive places that seem to have extraordinary things happening.”

Comstock can’t say for certain what makes Lincoln such a spiritual power place. Perhaps it’s the presence of large deposits of white quartz. Maybe it’s tectonic vibrations. Or it could have to do with geomancy; she’s not sure. But she knows there’s something to Lincoln, just like there’s something to Stonehenge or Easter Island.

Bohjalian isn’t quite convinced. He quips that maybe it’s something in the water or aliens (which some residents have claimed to see), or crop circles that bring seekers to the region. Or, perhaps because the rocky, hilly land isn’t great for farming, it’s spiritually fertile — a yin and yang effect of sorts.

Regardless of why people come, Bohjalian, who has chronicled rural life in Lincoln for 20 years in his Burlington Free Press column “Idyll Banter,” acknowledges that they do come. And, like most other residents of Lincoln, he welcomes them.

“There are a lot of searchers, people trying to understand their own spiritual grounding,” he says. “Lincoln is a sort of tent in that regard. But why that is, I don’t know.”