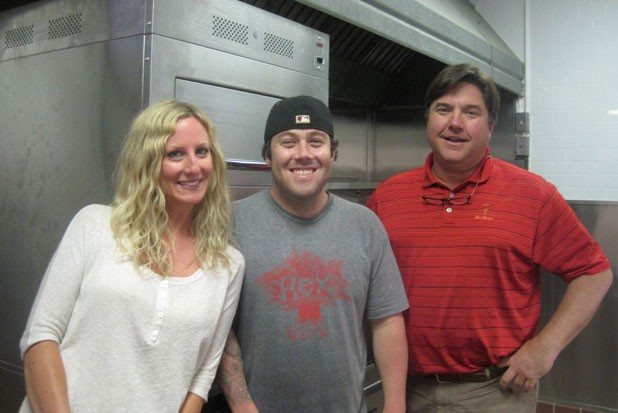 But Oles warns that potential regulars shouldn’t wait until then to purchase a wine locker — an on-site mahogany container in which to store bottles from the restaurant’s 200-bottle wine list for personal consumption. There are only 10 left of the original 30.

The vintages range from big names such as Moët & Chandon to “really obscure, small-production wines,” says Oles, who mentions cult wines from ROCO Winery in Oregon. With price tags ranging from less than $40 to $500, the wines are housed in a glassed-in, converted elevator shaft.

Another luxe touch: E.B. Strong’s offers valet parking in its own lot behind the restaurant.

But the real reason to head to what may be Burlington’s first high-end steakhouse — named for owner Tim Halvorson’s grandfather — is the food. Oles says the fried-oyster sliders served in pâte à choux with deviled aioli have been a hit on the appetizer menu. So has the seared ahi tuna with watermelon, sesame and soy-mustard sauce. Even the house salad is far from ordinary, with its combination of Asian pear, mango and herbs.

Aged steaks are on the large side, starting at an 8-ounce filet mignon and going up to a 20-ounce porterhouse. Cornflake-crusted Misty Knoll Farms chicken and waffles with Old Bay seasoning, and diver scallops with quinoa and ham, are among the choices for diners not in the mood for beef. Here’s to a strong start.