Going on a Supply Run with an Asian Grocer 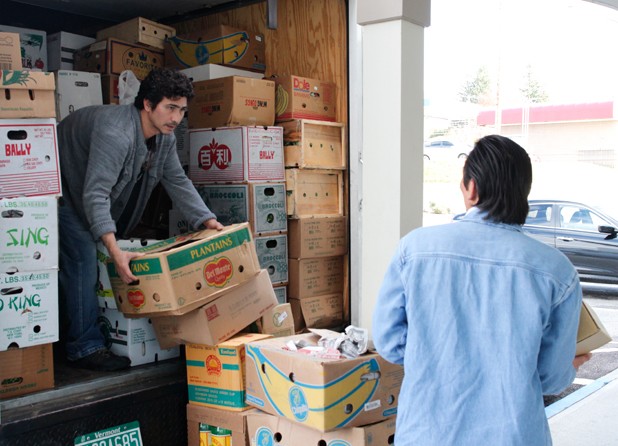 Thanh Pham has taken exactly one day of vacation since opening Namaste Asian Market with his wife in 2010. That respite came two Sundays ago, when Pham (whose first name is pronounced “Tan”) played hooky to take the couple’s 16-month-old daughter to the Buddhist temple in Concord, N.H.

Pham, a 44-year-old immigrant from Vietnam who came to Vermont in 1989, told me this as we barreled down the highway in a white box truck emblazoned with the name of his business. I was accompanying him on one of his weekly runs — this one to Boston — to purchase Asian dietary staples: bok choy, kaw thong, bean sprouts, bitter melon, tofu.

Only a few Burlington-area stores carry those items, including the two markets Pham and his wife now run under the same name in Winooski and Essex Junction. Because of that scarcity, members of Burlington’s Asian community descend on Namaste whenever Pham rolls back into town with thousands of pounds of wholesale meat, grain and produce.

“I’m going to show you some crazy places,” Pham said when I first entered his Winooski shop to ask about joining his next run to an urban market. That afternoon, he had just returned from a supply mission to Queens, N.Y. Customers were already lined up behind the register, not unlike the beer nuts who stock up on Heady Topper every Tuesday at Waterbury’s Alchemist.

The destination of Pham’s trips depends on the location where his most prized supplier — a Florida-based fruit and vegetable seller — chooses to make the drop. Pham goes as far south as New Jersey in certain weeks, sometimes twice.

Sitting shotgun in the Namaste-mobile a week later, I couldn’t imagine what crazy places Boston — a city I’ve lived in — would have in store. But Pham has been driving this route for three years, so I trusted his judgment as we left Winooski at about 7:30 p.m., merging south onto I-89.

At first glance, it would be easy to mistake Pham for a surfer dude, or maybe the philosophy major you’d feel comfortable inviting to a party. His personality is genial, and his outfit consisted of a weathered gray cardigan, a T-shirt and baggy jeans. During the drive, he sipped on iced coffee and smoked the occasional Nepalese cigarette. But his attitude turned businesslike whenever his iPhone rang with 11th-hour grocery orders, many of which he fielded in Vietnamese.

When he got a call from Bishnu Gurung, his Nepali wife, Pham adopted a more tender tone. Calling her “honey” in English, he reminded her to power down all the equipment in their banh mi restaurant, Darshan Namaste Asian Deli, which opened across from their Winooski market last summer.

Pham told me that Gurung, 26, is the brains of the couple’s operation, which now includes three other employees. Before he met her through a Nepali friend several years ago, Pham explained, he ran a sizable cleaning crew for a clientele that included Burger King, Bolton Valley and Friendly’s. Eventually tax trouble caused him to shutter the enterprise, but that wouldn’t have happened if Gurung had been keeping the books and calling the shots, Pham now believes.

“If I knew Bishnu then, I’d be a rich man now!” he said with a grin. “When I met her, all my life changed. She knows how to work on the money, to do the business.”

Pham doesn’t seem like a slouch himself. Even though he’d woken at 5 a.m. that day to clean, cook and look after the stores, both in person and via security cameras that feed into his smartphone, he still made the four-hour trip to Beantown without shut-eye.

At about 11 p.m., we exited I-93 just before it drops into the city. We headed east over the Mystic River and into an industrial section of Chelsea, then snaked through a maze of loading areas. Few businesses were still open — a Dunkin’ Donuts, a Mexican restaurant, a strip bar called King Arthur’s.

When we stopped, Pham backed the truck up to a loading dock and made one last call to Gurung before settling onto a thin mattress he’d unrolled behind the driver’s seat. “You just sleep, brother,” he told me, and proceeded finally to do so himself.

Still in the passenger seat, I counted sheep and stared at the sea of storage facilities, barren except for the occasional rat, BMX rider or long-haul truck that crossed my field of vision. More trucks began arriving at about 2 a.m., maneuvering like whales for space along the loading dock. The beeps of reversing forklifts soon emerged from the facility behind us, followed by loud, metallic thuds.

Before long, a similar ruckus emanated from our own wagon. Awakened from his brief slumber, Pham entered the facility and reemerged pulling a dolly loaded with boxes. With ant-like efficiency, he stacked tomatoes, peppers and zucchinis across the space that had just been his bed.

With the moon still high in the sky, we headed off to another nearby loading facility, and then another. At each dock, the traffic of New England food distributors was picking up. Chelsea was just the first stop on our itinerary, Pham assured me; we would get the good stuff in Dorchester later that morning.

As we got back on I-93 and entered the Big Dig tunnel, en route to a Chinese seller in Newmarket Square, Pham told me how Boston used to confuse him when he and Gurung first opened their business. Only after repeated trips in their old van did he learn his way around the city, develop a network of suppliers and make the better deals that have allowed their business to grow.

We hit three more sellers before ending up in a section of Dorchester lined with Vietnamese restaurants. There, Pham chatted up a group of men standing by a truck filled with Chiquita bananas and fresh Asian veggies and herbs. That truck was the reason we’d come all this way.

By the time Pham loaded the last few boxes, his own truck was sagging under the 8000 pounds of goods he estimated had cost him $10,000. As he navigated Boston roads one last time, we both nibbled at the steamed vegetables, stewed meat, rice and hardboiled egg that had been served to us in Styrofoam boxes at one of the Vietnamese restaurants.

I fell asleep quickly, and when I opened my eyes, we were in New Hampshire. Pham was getting gas and his second iced coffee of the morning. As we headed back up I-89, it dawned on me that the “crazy” aspect of the ride wasn’t the out-of-the-way places Pham had shown me in Boston, or could show me in New York or New Jersey. It was the determination that made him travel all those miles, every single week, for the purpose of stocking his shelves. “Tenacity” or “acumen” may be better words for it.

Multiple times during our trip, Pham explained that hiring a middleman is out of the question for him and Gurung. One day, he said, they might let her brother take on the responsibility. For now, it would cost their business too much, and an employee wouldn’t know how to negotiate for cheaper prices or stack the boxes correctly in the back of the truck.

Despite Pham’s hands-on approach, he is trying to cut back on all the toil and hustle. He and Gurung have just begun taking the liberty of closing their businesses every Sunday.

On the final leg of our drive, Pham made it through a New Hampshire weigh station without incurring any fines (not always the case, he said). When we arrived in Winooski at about 2:30 p.m., we found a employee of a local Thai business waiting at Namaste. He explained that he had forgotten to place an order ahead of time and asked to buy any surplus basil and sprouts.

Pham said yes and asked the man to wait while he and his Tibetan assistant unloaded the truck. He would be busy for the rest of the day helping customers and washing produce, he told me.

“If I slept now, I could sleep until morning, but no, I’ve got to do all this,” Pham added, before chuckling hoarsely and offering a parting forecast for his business. “For now, everything goes smooth, everything is under control. But in two years, I don’t know.”