It was a surprise hot-ticket item among the hundreds for sale at the state's annual surplus auction — essentially, a government garage sale, complete with dump trucks and snowplows.

The two men's bids rose so quickly that auctioneer RJ Klisiewicz of Auctions International interrupted his calling to interject: "What's in this thing?"

That thing was an unremarkable white Whirlpool top-loader, smudged from three years of use in one of Vermont's state parks. Its condition, according to the 30-page auction program in the hands of each registered bidder: "works."

In the end, a gray-haired man lounging on a parked snow machine — a Fish & Wildlife Department castoff that would later be up for auction — won the appliance. He held up the orange card that displayed his bidding number to offer $570 for the washer.

Vermont's annual auction is part festival and part cultural event, said Terry Lamos, a state employee who oversees the surplus property program and spent the last five months organizing Saturday's event. She said the Agency of Transportation is the biggest supplier of secondhand stuff, followed by the Department of Public Safety — primarily state police — and Buildings and General Services.

Lamos' job is to convert that aging and obsolete Vermont property into state revenue. This year's offerings included plenty of old dump trucks and police cars, lined up in the parking lot outside the Agency of Transportation's repair garage. But there were some unexpected items for sale, too, among a total of 239 "lots": a Boston Whaler motorboat (with a saltwater engine, oddly enough, as one passerby pointed out), more than a dozen kayaks (state park rentals that probably leaked, according to Klisiewicz) and a stack of confiscated deer stands. 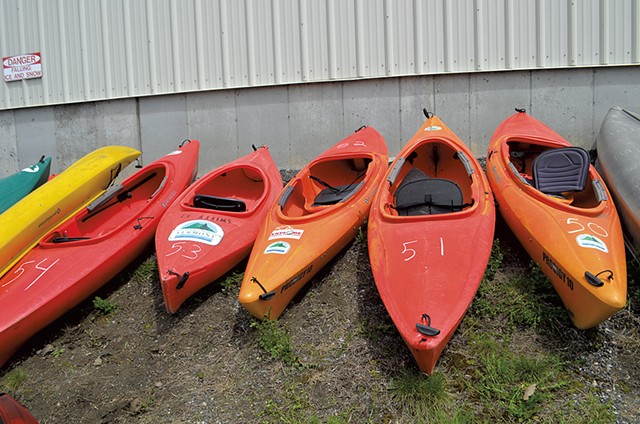 Also new this year were airport "sharps," assorted implements that didn't make it through the security screening at Burlington International Airport. They had been sorted into plastic tubs by type — corkscrews, pocketknives, innocuous butter knives and a couple of more ominous-looking switchblades — and tagged with nonnegotiable prices to be sold under a tent.

Everything had to go by the end of the day. Five hundred and two people had registered to bid, up from 355 last year, according to Lamos. Most of those appeared to be men in work boots who parked their dirt-spattered Ford and Chevy pickups along Route 302. Some brought girlfriends or other family members, but the predominant demographic was middle-aged dudes.

They had started trickling in to register as bidders at 8 a.m., after which some slouched against the lined-up vehicles, hands in their jeans pockets, examining the machinery in advance of the action.

The auction started promptly at 10 a.m. under dark, threatening clouds. But Klisiewicz was covered. Assisted by a microphone, he directed the bidding from an enclosure on the back of a pickup truck that followed the action, lot by lot. Next to him, Bill Beard, a state employee, recorded the winning bids on a pad of paper.

Men swarmed around the first item, a 2008 Chevy Tahoe with 108,000 miles and a chipped windshield. A state employee started it up, and the engine purred. Minutes later, it sold for $6,200 to bidder No. 398, Klisiewicz announced.

And so it continued, for hours. A woman holding a long stick festooned with strips of yellow caution tape stood, Vanna White-style, by the items to be auctioned. If a vehicle was too far away, Klisiewicz would call out to his driver, "Dean, move on up," and his mobile auction house would inch through the crowd of roughly 1,500 to get there.

"Gonna need new valves," a man mumbled about a pickup he passed up. 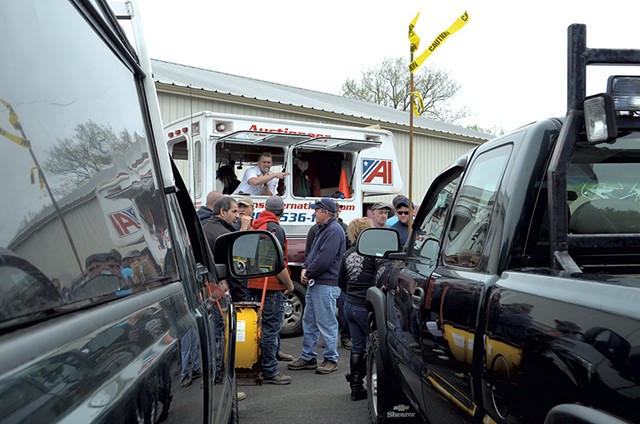 One 2004 Subaru Legacy was listed as being in good working condition but had a caveat: Klisiewicz warned that it "stinks real bad" — like a dead mouse, apparently. He recommended that the buyer pay a visit to Dollar General across the street for a Christmas-tree car freshener. "Don't let the stink scare you off," he added.

Vermonters made up about 80 percent of Saturday's bidders, but the auction attracted buyers from all over the northeast and even Pennsylvania.

Myron Moody, a road commissioner from Cornville, Maine, said he's come to Vermont's auction every year for two decades. He's snatched up massive trucks for as little as $25,000 and put them to work clearing the streets in his town of 600, he said.

This year, Moody said, he came for the fun of it — and to look for a "cheapie" truck to give his grandson. He didn't need any more heavy equipment, he said proudly; the vehicles he bought six years ago were all still running fine.

Robby Mazza was not happy about the idea of Vermont taxpayer dollars going to waste as he perused the dump trucks for ones he could use for his Colchester excavation business.

"You see any rust on these trucks?" he asked, gesturing to plow trucks. "Doesn't make a lot of sense."

Lamos had a reasonable defense. The state uses historical and national data to determine the best time to sell equipment, she said, before it starts to require costly repairs. The state typically keeps its vehicles for about five years, though each department has a say about when to get rid of stuff, she said.

Joe Perreault, owner of Midway Auto in Plainfield, said the best deal he ever got was on an old ambulance, which he resold to a man who brought it to a village in the Dominican Republic.

Three hours into Saturday's auction, though, he hadn't purchased anything. Perreault said that some of the vehicles were going for double what he'd hoped to pay. He speculated that the big crowd was driving prices higher.

"This is crazy," he said, shaking his head.

Such complaints are part of the ritual, Lamos said.

She noted one man from Maine was "out there trash-talking first thing in the morning" — part of an elaborate and practiced display to dissuade others from bidding.

Lamos offered some theories: No Québécois turned out to bid this year, she said. And those snowplows? Compared to the usual offerings, she said, they just weren't in as good shape.