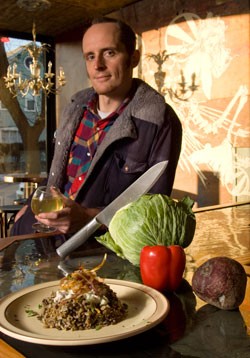 Richard Witting has four jobs: He owns a business called Firefly Catering, he helps out at Dish catering and, he says, “Occasionally I’ll appear at Stone Soup and lend a hand for the fun of it.” But these days, he spends most of his time researching and cooking dishes for ¡Duino! (Duende).

Located beside Radio Bean and, like it, owned by Lee Anderson, Duino is a small, funky spot with warm décor that includes gold-painted tin ceilings and deep red walls. A wide doorway lets patrons move easily between the restaurant and the coffee shop/nightspot and enables the Bean’s musical acts to entertain diners noshing on global street food that’s inexpensive for downtown Burlington. At Duino, kebabs, sliders and crêpes cost $5 a pop. Any can be delivered with complementary sides for $10. Nightly specials cost up to $15.

For Witting, learning to make dishes from around the globe is a treat. “I can’t tell you how much time went into it, but it was such an enjoyable process,” he says. “Ten years ago it would have been a lot harder, but with the Internet, it’s amazing how you can be connected to anyone across the world and what they’re doing.”

By making “the people’s food” from places like Iran and Israel, Witting can introduce customers to new cuisines without breaking the bank, he says. “Countries and cultures have these really advanced cuisines that we barely even know about. We’ve grown up with France as the center of the [culinary] world, and here [in the U.S.] we have this industrialization of foods.” As a result, he says, Americans may overlook tasty alternatives: “Persian food has a history that goes back to God knows when.”

Like the street-cart vendors whose fare he’s reproducing, Witting learned his craft on the job. He started off washing dishes at Nectar’s and Kountry Kart Deli as a youngster, and has spent as much time serving food as working behind the line. It wasn’t until he ran the kitchen at upscale Opaline — located where the Blue Cat Café and Wine Bar now resides — that Witting began to think of himself as a chef.

We think it’s fun to pile a table with dishes from several continents, dip sweet potato and taro fries in banana ketchup or aioli, and still leave with plenty of dough in our wallets. So we decided to grill Chef Witting.

How did you eat when you were growing up?

With my dad’s side of the family, it was definitely post-World War II food: boiled cabbage, some standard dinners that you had in [the same] order every week. But my grandmother — she was Ukrainian, and every so often she’d make pierogi. It was this huge ordeal … She’d lay a clean bedsheet on the bed and fill it with hundreds of pierogi. It was one of my favorite things as a kid.

My mom’s mother was more into the ’60s cuisine: lots of German foods, lots of pineapple and olives. She definitely had a love for cooking; she even wrote a cookbook, but I don’t know that it ever got published.

As a kid, I’d been eating my grandparents’ food. When I moved up here, my mom was into the ’80s ... cuisine — all the microwave cookbooks — but she also had a garden and was making zucchini bread and the delicious hippie food we all had back then.

The first time I ever had sushi was with her. She was a flight attendant when I was a kid, and I’d fly with her to NYC and go have something to eat there. It totally shaped why I love eating and cooking the way I do. It made me want to go, “Ooh, what’s around the corner?”

Back then, were there any foods you thought were gross?

Sometimes we would have hamburger that was really low grade and had chunks of cartilage in it. Before I moved [to Vermont], I was pretty picky. I remember being grossed out by avocados and guacamole, which seems insane now. Now I could eat guacamole all day long.

Pickles are probably my favorite food in the world, specifically kimchi. I can eat more kimchi than I should. Green tea. I frequent Dobrá a lot. I don’t eat it much, but I think venison is one of the most delicious things that exists.

Have you ever eaten something truly weird?

Well, I feel like I’ve eaten the standard bog creatures — alligator, frog and snails. Then, too, there was a time I went to a Korean place and got a dried stingray stew, and it was filled with bones and cartilage. That was very challenging.

What’s the last thing you ate?

Breakfast today was some Triscuits, some Brie, orange marmalade and green tea.

You’re trying to impress somebody with your culinary prowess. What do you make?

In the daytime, I love making eggs Benedict. Hollandaise sauce is one of my favorite things. At nighttime, I guess I’d love to do a venison carpaccio with Ethiopian spices on the outside.

One time — mind you, this was probably, like, when I was 20 — I attempted to sweeten up spaghetti sauce using grape jelly, late night. It’s almost too embarrassing to mention.

Describe your best meal ever.

About 10 years ago, I randomly took a job working at a horse show in Louisiana. It was a really hard job. We set up the courses for the horses — all their jumps. Every day was 12 or more hours. At the end of the week when we got our first paycheck, my friend and I were, like, “No holds barred. We’re going to get the best food we can get in this place.”

There was a sushi place called Little Tokyo and, without even looking at prices, we ordered anything and everything we wanted on the menu. Little did we know the place actually got their fish daily. There was fish I’d never seen before, and everything was so fresh and so good. At the end, when we got our bill, it was so cheap that we tipped 100 percent ... Then we went back for the next two weeks while we were working there.

And your worst meal?

One time, driving down the coast from Oregon to California while the Atkins diet was so hot, we stopped at a healthy food place. There were tiny frozen shrimp, still frozen, on iceberg lettuce with a light dressing. I felt like I was hollow when I left.

The Joy of Cooking is a standby in my kitchen, always. It may not have flair, but I know any recipe I get from the Joy is going to work. It’s a basic manual.

Madeleine Kamman’s book The Making of a Cook is the second one I go to if I need to expand upon something.

[Kamman] came to Opaline once and I got to cook dinner for her. She said it was much better than the last time she ate there. I took that as a compliment.

Name a local restaurant you patronize.

The green papaya salad at Sapa’s [Coffee and Tea] is probably my favorite salad in Burlington. Trattoria Delia does … it right year after year. Their tiramisu is one of my favorite things, for sure. American Flatbread … Stone Soup for lunch.

I’m a big fan of Chartreuse, wine and beer — wine probably more so. When I lived out in San Francisco, whenever we had enough money, my girlfriend at the time and I would drive up to wine country and cruise around Napa and Sonoma.

Rosés are my favorite. Of all of the wines, they’re what I’d most want to grab and drink … They have such a bad rap from white Zin, but the ones that don’t have the jammy strawberry thing going on but have a whole other bouquet of flavors and smells — I love ’em.

What kind of music do you like to listen to in the kitchen?

Things with an upbeat tempo, hip-hop and dance. It’s like how on ships they’d have a drummer to set the pace. I like finding great musicians from other parts of the world that people here don’t know anything about.

If you weren’t a chef, what would your job be?

I think I’d want to be a graphic designer. Before I got out of [Burlington] high school and started working in kitchens, art was my focus. I wanted to do art, but I didn’t have any work ethic. Obviously, cooking is an art as well.

What are your hobbies?

My favorite is probably wild mushroom hunting. I started doing it about 10 years ago. In the winter I have dreams about going out and picking wild mushrooms.

I play role-playing games, but not Dungeons and Dragons. I play some guitar.

I collect cookbooks. One day, I hope to find out how much writing there is on the Abenaki and what they ate before the Europeans arrived. I’d like to design a menu that’s precolonial.

What’s your most embarrassing favorite food?

Ramen noodles, specifically Shin Ramyun. My shameful favorite meal would be Shin Ramyun and a can of Coca-Cola.

Restaurant age: Just over a month

Training: On the job

What’s on the menu? Switchback-braised bratwurst, crêpes, Cubano sandwiches, fried plantains, Iranian kebabs, majadra. “I love the majadra [a lentil dish]. I learned about it when I worked at this Lebanese place. It represents simplicity, but it’s really delicious.”