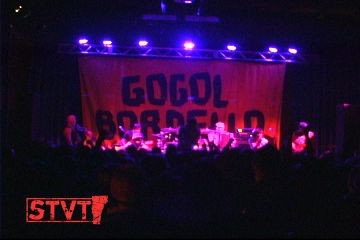 Friday night at the Vermont College Gym - two silvery tour buses idled outside and a sold out crowd undulated beneath dormant basketball hoops.

Gogol Bordello may be the biggest music act to hit Montpelier Vermont in .... well, ever!?

Ed DuFresne of Edifided Presents managed to lure the popular band to Vermont's state capitol with a grassroots campaign. The volunteer-run show was simmering with anticipation and once the music exploded into the cavernous gym, the sweaty crowd rarely stood still.

Gogol Bordello's charismatic frontman Eugene Hutz, relocated to Burlington Vermont from the Ukraine in his teens.  After playing in local punk bands, he moved to NYC and pioneered the Gypsy-punk movement.

A diverse crowd turned out to see Eugene's triumphant homecoming and to partake in the energy-infused theatrics of his Eastern European punk extravaganza.  Gogol Bordello is kicking off an international 3-month tour.

Montpelier may never be the same.