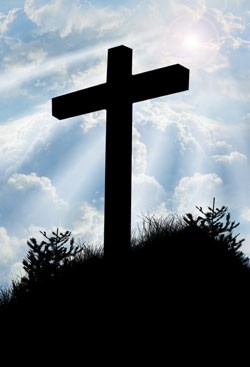 Darling Hill, in the Northeast Kingdom town of Lyndonville, is one of those places they call God’s country. But, judging from the way some of the hill’s residents are talking, God is a shortsighted steward of his kingdom and a homophobe, to boot. Across the nation, an increasingly tight coalition of the Christian and economic factions of the Right has installed that same mean deity in a new trinity, atop the freedom to hate and the holiest of holies, property rights.

This Lyndonville story began in 2007, when Joan and Richard Downing built a 24-foot cross next to their Chapel of the Holy Family on Darling Hill. The cross was lit from inside — so brightly, neighbors complained, that it outshone the very stars in the sky.

In 2008, Lyndon’s Development Review Board ordered the Downings to take the cross down, but allowed them to put up a more modest one — about half the size, without lights. This, however, was not acceptable. The couple’s was one of three “Crosses of Dozulé” in Vermont, and many more worldwide, named for a French town where Christ is believed to have appeared numerous times. According to the Downings, as quoted in an AP story, Jesus gave instructions about the crosses: They must “become lights in order to question hearts that are obscure.”

Never mind the Stations of the Cross, the Rosary Garden and numerous other religious attractions on the Downings’ 800-plus acres, also home to a spa and beef-cattle farm. Without the voltage in the Dozulé Cross, God’s word would be flouted, they suggested — and their religious freedom as Catholics infringed.

The Downings hired attorney L. Brooke Dingledine to appeal the board’s decision (that review was rejected) and, when the Agency of Natural Resources denied an Act 250 permit, to appeal that to the state environmental court. Dingledine — whose name shows up as counsel to every third company seeking to construct some giant thing in some unspoiled rural place — appears to be driven by a vision of her own: a state entirely obscured by immense, unsightly structures.

Consistent with this mission, Dingledine recently introduced new evidence, along with the First Amendment argument, in the Downings’ appeal: that the Sheffield wind farm — 16 400-foot turbines, slated for completion by Thanksgiving — is in the same viewshed, and this should change the court’s consideration of the cross. In other words, the view got ugly. Let’s make it uglier.

The Lyndon board and state Agency of Natural Resources ignored the freedom-of-religion argument. But the e-court judge could choose to pay attention to it. Any Vermont court may consider state constitutional issues. It happens all the time in environmental court — where the case starts anew and the date of the judge’s ruling is anybody’s guess — though the articles usually at issue are the ones that treat the conflict between private property rights and the common good. “It would be a holiday for the judge to go through the luscious green pastures of constitutional law,” Montpelier lawyer and former Deputy Secretary of State Paul Gillies told me.

The holiday probably will end as soon as the clerk looks up the legal precedent, however. “The rule in zoning is equal protection,” a spokesman for Americans United for Separation of Church and State told me. “Whatever regulations apply to other structures also apply to religious structures.” If you can’t light the windmill on your minigolf course, you can’t light your replica of Noah’s Ark, either.

This is unlikely to assuage the Downings’ feeling of religious injury. Judging from the comments on news sites that have covered the case, their supporters will continue to feel the pain — and a lot of anger — too. Nor will an affirmation of equal protection quiet the rhetoric sounding from the Right.

In Citrus County, Fla., for instance, the federal designation of Kings Bay as a sanctuary for wintering manatees has drawn fury from the local Tea Party. Banning speedboats would contravene not only beachfront property owners’ rights, its members say, but also biblical and constitutional precepts. “We cannot elevate nature above people,” Edna Mattos, leader of the Citrus County Tea Party Patriots, told the St. Petersburg Times. “That’s against the Bible and the Bill of Rights.”

The Left used to take heart from the fissure between the “moral” Right and the economic Right — Jerry Falwell on the one hand, say, and Grover Norquist on the other. But that split is more than healed. Now Scripture is routinely quoted to show that taxation impedes the family’s biblically ordained duty to care for its own, God is the protector of private property, and environmental regulation usurps man’s dominion over the Earth and its creatures. (The “evangelical environmentalists” show no sign of persuading their brethren on this last point.)

Back in Lyndonville, religion is also being dragged out to bolster sexual discrimination. Up the road from the Chapel of the Holy Family is the Wildflower Inn. Its owners, Jim and Mary O’Reilly, go way back with the Downings: From the 1980s to 2002, the two families ran a real estate development firm turned inn-operating corporation together,* and their websites still link. A person might surmise they’re conferring on their legal troubles.

As you may remember, the Wildflower refused to host a wedding when the owners learned the betrothed were both women — and, it turns out, they’d done it before. The ACLU sued the inn for breaking Vermont’s Fair Housing and Public Accommodations Act, and the defense recently responded. The ACLU’s claim is moot, it said, because the statute itself is unconstitutional: It violates the O’Reillys’ “free-exercise” rights under both the Vermont and U.S. Constitutions. Free exercise, that is, of religion — they are Catholic — though the word religion isn’t used.

Historically, God’s will has been invoked to justify all manners of evil, including slavery. This time, Vermont’s courts may reject the hallowing of hatred or land use by divine commandment.

But if Darling Hill is God’s country, for democracy’s sake somebody should revoke God’s constitutional rights.

Thanks to Jack Hoffman for the research.