Goddard College Invites the Community to Eat, Stay and Learn on Its Campus 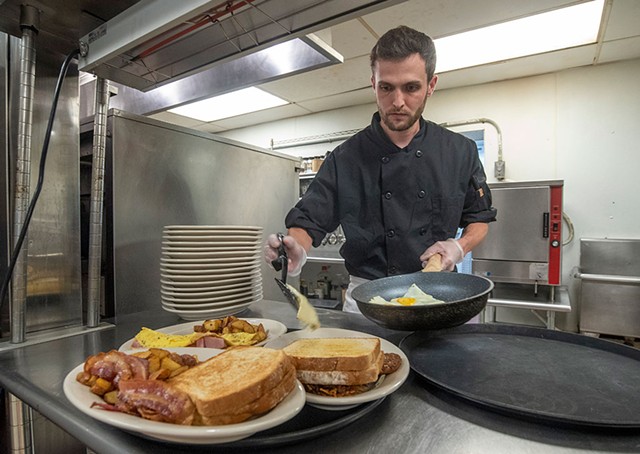 It's been a while since the Plainfield area had a spot where retirees could gather for breakfast. Maple Valley, the quirky restaurant and gift shop overlooking the Winooski River, was once a popular spot for people to meet up for a morning meal. After it closed four years ago, some of them migrated to the gas station across the street or headed down the road to Plainfield Hardware, which has a deli.

But it just wasn't the same, said Daniel Marcus, whose father used to meet some other guys early each morning in the warmer months to socialize.

"There really hasn't been any place that took its place," Marcus said.

Now a new spot is open at a familiar location: Goddard College, the experimental school that has for decades nurtured the intellectual pursuits of students seeking alternatives to typical institutions of higher education. Through the years, Goddard has largely kept its buildings off-limits to the public. But under Dan Hocoy, who became Goddard's president last fall, the college is welcoming other uses of its campus to raise its profile — and some much-needed revenue.

Cabot Creamery signed a deal last week to house 16 of its trainee workers in a Goddard dorm starting on October 1. Hocoy invited an elementary school to use another dorm as classroom space as of this month. He's opening up dorms for short-term stays, too, and reviving events and conferences, including an alternative media gathering planned for October.

The Plainfield-based school has served students through a low-residency model for many decades. Students and professors visit campus for stays of several days but complete most teaching and coursework remotely. That means the campus has long seemed deserted at times — something Hocoy is trying to change.

The Goddard Café, which opened this summer, provides table service in the college dining hall. It gives the kitchen staff stable hours, even when students aren't on campus, and makes a few thousand dollars a month.

"Why not?" Hocoy said. "It's a place where local people can eat in the morning, and it also brings in some non-tuition revenue."

One morning last week, a round table was full of longtime local residents who had gathered for breakfast.

"Tell other people about us," a waiter told a pair of departing diners.

Hocoy came on board in July 2021 with a clear mandate to help turn things around at the experimental college, which had just gotten off probation with the New England Commission of Higher Education due to concerns about its finances and governance. Enrollment at the college — which also has campuses in Port Townsend and Seattle, Wash. — is just 370 or 380 this semester; Hocoy would like to increase that to 600.

A financial audit last month showed that Goddard, which has a budget of about $7.5 million and $2 million in reserve, will end fiscal year 2022 with a tiny surplus for the third year in a row. But the future of the college is still shaky, and Hocoy's looking at all the revenue sources he can. He raised undergraduate tuition 7 percent this academic year, to $19,147, and he's exploring partnerships with other colleges.

Goddard's not the only small college in peril. In the past few years, Vermont's Green Mountain College, Southern Vermont College, Marlboro College and the College of St. Joseph have all closed. In June, the Vermont College of Fine Arts announced it was moving its programs to Colorado, though its administration will remain in Montpelier; the school is seeking uses for its own vacant buildings.

Nationally, fewer people are choosing college these days, and Vermont appears to be at the leading edge of that trend. Enrollment in U.S. colleges dropped 4 percent, or about 685,000 students, between spring 2021 and spring 2022, Josh Moody reported in May for Inside Higher Ed. California saw the largest drop in enrollment, at 8 percent in that time, followed by Vermont and Washington, at 7 percent.

Goddard occupies a former agricultural estate called Greatwood that includes a manor house and architect-designed gardens. While the 117-acre campus isn't in tip-top condition, it's serviceable and has wide potential for use in an area of central Vermont that otherwise has little to offer in the way of public accommodation or gathering space.

Some are welcoming Hocoy's strategy.

Dan Chodorkoff, a Goddard graduate and longtime former professor who founded the Institute for Social Ecology, said he had given up trying to rent space at Goddard for the institute's summer events. The institute provides education and organizing help to social and political movements. Chodorkoff recently searched for somewhere to house eight people who were traveling to Vermont from Mississippi as part of a large gathering in July.

"I've called pretty much every year to find out if they have space available, and I've been told no. And this year I didn't even bother to call them," Chodorkoff said. But someone else asked Goddard, and, to Chodorkoff's surprise, the college invited the institute to use one of its dorms.

"I guess they need the money," a grateful Chodorkoff said.

Activity is picking up on campus this month. Hocoy signed an agreement in August with Maplehill School and Farm, a Plainfield-based school for youth with social, emotional and academic difficulties, to house its new elementary-age program at Goddard starting this fall. Maplehill has 28 middle and high school students at two residential sites in Plainfield, including a 142-acre organic farm. The newly licensed elementary day program will serve up to 12 fourth, fifth and sixth graders.

Maplehill's executive director, Joe Astick, said he's elated that the school will have access to the campus, which includes a performance venue called the Haybarn Theatre.

"There's so much green space, and the amazing woods and historical buildings — it is beautiful," Astick said. "It's empty, but it's not crumbling by any means. It feels vibrant."

"There haven't been a lot of people here for a long time." Larken Bunce tweet this

Another dormitory has been converted to the home of the growing Vermont Center for Integrative Herbalism, which moved on campus in 2020 and serves 60 to 70 students each year in low-residency programs. Founding codirector Larken Bunce said she plans to start working with Goddard to house her visiting students.

Bunce, a Goddard alum, would like to see more community activity on campus.

"There haven't been a lot of people here for a long time," she said.

Hocoy is also trying to increase the number of on-campus events. Goddard is reviving an alternative media conference that it has hosted twice before. In 1970, more than 1,700 FM radio DJs, underground newspaper reporters and cartoonists, as well as radical Jerry Rubin and Mad Magazine cofounder Harvey Kurtzman, traveled to Plainfield for the first three-day conference. Baba Ram Dass, the spiritual teacher, made an appearance.

The 2013 conference was considerably more low-key, featuring presenters from local media, including Seven Days. This year's event on October 12 is expected to draw 10 presenters, said Joshua Auerbach, Goddard's marketing director. He said it was too early to release other details. 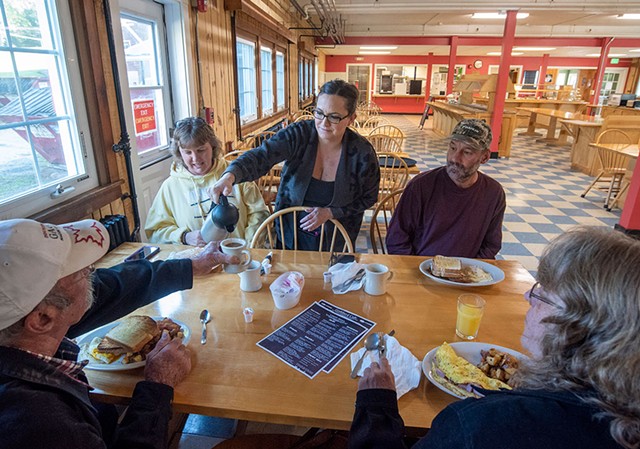 The café, run by chef Larry Dillard, is open Thursday through Sunday from 6 a.m. to noon, serving up specials such as smoked salmon Benedict and, for kids, Fruity Pebbles pancakes. Dillard said he's extending the hours on October 1 and wants to open more days, too, as business picks up.

The café is still something of a secret, though it's on Facebook and sometimes advertises on Front Porch Forum. A small sign goes up by the main road, U.S. Route 2, when it's open. Dillard plans to increase marketing in time for foliage visitors. He's also going to add occasional dinners at the café, as well as catering services.

Formed in 1938 as a response to the rise of fascism, Goddard has always taken a different path from its higher ed peers. Students pursue highly individualized learning plans, and the school started offering low-residency courses to nontraditional learners several decades ago, long before remote learning became a reality for millions in the pandemic. Enrollment hit a peak of 1,700 in 1978.

Though the college has managed to hang on through threats of insurrection and periods of low enrollment, presidents have sold off buildings, acreage and programs over the years to keep it afloat.

Goddard students and faculty also have a history of putting administrators through the wringer. Hocoy is one of 12 presidents who have served since 1990, and the faculty union recently announced it's trying to recruit students who will help them overturn the Hocoy administration.

Those students, faculty union cochair Herukhuti Williams said, could help counter "the fascist and tyrannical tactics of the president and board."

Williams and others say Hocoy and the chair of the board that hired him, Gloria J. Willingham-Touré, are bringing unwelcome capitalist activities to a space that has always been reserved for learning and experimentation. Hocoy has come under fire for installing a Pepsi machine on campus to provide after-hours snacks for students who are staying there for their residencies; he said it was vandalized. And he's been widely criticized for saying faculty should dress more professionally.

"We did have a few instances in which our faculty showed up to meet with our accreditors in ripped jeans and T-shirts," Hocoy said.

Despite the internal strife, Hocoy said he's glad to be at the helm of Goddard. Progressive education is needed more than ever these days, he said, and he's sure the school can regain some stability.

The original print version of this article was headlined "Course Correction"