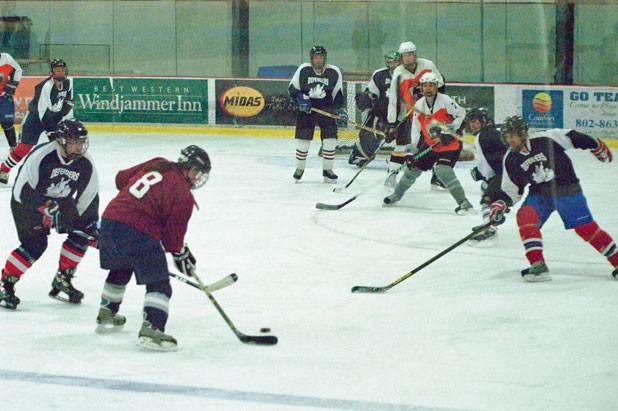 The ref has just dropped the puck in the opening face-off of a late-night hockey game in South Burlington’s C. Douglas Cairns Recreation Arena — and, despite the chilly indoor temperature, the action on the ice quickly heats up. The Division 3-A Defenders are trying to ward off an early, sustained attack by their opponents, the Frozen Earthlings. The 600-seat arena is devoid of spectators, but the hall is filled with cacophony: slapping sticks, skritching skates, shouting players and the occasional clang of a puck caroming off the Plexiglas boards.

Dressed in black-and-white jerseys and composed mostly of Vermont National Guard members, the Defenders struggle to clear the puck from their end of the ice. The Frozen Earthlings, whose roster consists exclusively of Dealer.com staffers, are decked out in orange-and-white jerseys akin to those worn by the Philadelphia Flyers.

One might assume a hockey team of military weekend warriors would easily outclass a gaggle of web geeks. In fact, the teams are fairly matched in size — and smell. Both benches are ripe with the pungent odor of equipment and jerseys that evidently don’t get washed or aired out much.

Less than four minutes into the game, the Earthlings slip the puck past the Defenders’ goalie and into the net. The Earthlings’ bench erupts with shouts and the celebratory rattle of hockey sticks hammering against the boards.

On the Defenders’ end of the ice, Corey Duteau skates back to his bench for a line change before the next face-off. Duteau is one of several Defenders who aren’t Guard members; he joined the league and was assigned to the team as a “free agent” four years ago. He’s been skating with the Defenders ever since.

Duteau got into adult hockey with only limited past experience. He played youth hockey as a kid, he says, and made his high school team in Rouses Point, N.Y., but didn’t pursue the sport further. These days, the 37-year-old pharmacist makes a one-hour drive from his home in Isle La Motte to South Burlington once a week to enjoy some late-night stick action.

“It’s a bit of a commute, but it’s worth it,” Duteau says, catching his breath before the next line change draws him back on the ice. “The recovery time [after the game] is a little longer now. For the younger guys, it’s just a day. For some of us, two. But it’s a good hurt.”

Plenty of adult hockey enthusiasts in the greater Burlington area seem equally willing to suffer for their sport. Duteau is one of about 550 players in the South Burlington-based Full Stride Hockey leagues. Founded 14 years ago, Full Stride has been on a power play in recent years, attracting a growing number of men and women of various ages and abilities who are looking for more than just the random pickup game. For some, Full Stride offers the opportunity to learn the sport as beginners. For others, it’s a way to pursue a beloved frozen pastime beyond their glory days, complete with paid refs and timekeepers.

Full Stride Hockey is the brainchild of Dan McFall, 49, a Buffalo, N.Y., native and former National Hockey League defenseman who played with the Winnipeg Jets in the mid-1980s. Today, McFall runs seven different divisions by ability and gender — male, female and coed — with 34 adult teams and year-round seasons. Players range in age from their twenties to their sixties. Experience and skill levels also differ vastly, with players ranging from novice pond-hockey skaters to former NHL and Division 1 college athletes.

McFall says he discovered Burlington “on a lark” while he was still with the Winnipeg franchise and on loan to the Montréal Canadiens’ farm team in Sherbrooke, Québec. On one of his “rare days off from hockey,” McFall and his wife spotted Burlington on a map and decided to check it out. After his season ended, the couple relocated to Vermont, and McFall opened an office in a converted house off Dorset Street in South Burlington.

“There was a lot of pent-up demand and a lot of people looking for a place to play,” he recalls, “so I think we really struck a chord.”

Full Stride Hockey — motto: “Play better. Play forever.” — now abides by USA Adult Hockey rules, which means that slap shots are permitted but checking is not. Players cannot deliberately slam each other into the boards or drop their gloves and duke it out NHL-style. In fact, players who fight face a one-year suspension.

Which is not to suggest that Full Stride games are dainty or contact free, McFall emphasizes. Even in coed games, such as the one between the Defenders and the Frozen Earthlings, elbows and sticks fly, and it’s not uncommon for a player to hit the ice face-first — with or without a ref blowing the whistle for a penalty. Accordingly, all players must wear helmets and face guards, McFall says. About 90 percent choose to don full-body gear, such as thigh and shoulder pads.

As in many adult leagues, Full Stride teams choose their own names, which makes for some colorful-sounding match-ups: the Crazy Puckers versus the Battle Hampsters, the Shanks versus the Beavers, Brain Freeze versus BrownChickenBrownCow — the last of which, McFall explains, is meant to evoke the sound of porn-flick music if it were put into words.

Back inside Cairns Arena, it’s now the middle of the second period. The Defenders are down by two goals when Frozen Earthlings player Jamie LaScolea returns to his bench for a rest after chasing the puck the length of the ice on a rare breakaway opportunity. The 36-year-old director of mobile development at Dealer.com says that most of his team members have played together for five years, which probably explains their dominating offense.

LaScolea says he joined Full Stride Hockey with only minimal prior experience — “Pond hockey three or four times, and I Rollerbladed a few times,” he says. His teammate Kate Barrett entered the league with considerably more expertise. The 22-year-old, who’s the only woman in the game, played hockey for Norwich University and more than holds her own against her male counterparts. On several occasions she outskates — or outmuscles — her male opponents to the puck.

Waiting for the ice is Craig Butkus, who skates for Threat Level Red, a team scheduled to play the next game at 10 p.m. (Full Stride games start so late, McFall explains, because the three rinks they use most often — Cairns, Essex Skating Facility and Gordon H. Paquette Arena at Leddy Park in Burlington — reserve earlier ice times for youth and high school games.)

When asked how coed hockey differs from the all-male games — Threat Level Red has five female players, including its goaltender — Butkus says he thinks the women often outclass the men.

“Quite honestly, I’ve got two daughters who both play hockey, and when I watch the women play, their games have much more finesse,” he says. “With the men, it’s all about the hitting and the physicality.”

After the buzzer sounds at the end of the first game — final score: Frozen Earthlings 3, Defenders 0 — the players line up, shake hands and clear the ice. A Zamboni sporting the St. Michael’s College logo resurfaces the rink while players in the next game stretch out at their respective benches.

Among them is Matt Wamsganz, 45, of Westford, who coaches the Chiefs. His team’s name was borrowed from the 1977 Paul Newman film Slap Shot, about a failing prohockey team that resurrects its fan base by resorting to constant fighting. As an homage to that classic hockey flick, Wamsganz, like all the players on his team, wears a jersey sporting the surname of the film’s troublemaking triplets: Hanson.

According to Wamsganz, his Chiefs don’t fight but are a “total hodgepodge” of players from various walks of life: a lawyer, a teacher, a couple of store owners. Wamsganz himself works for a civil-engineering firm. Some played college hockey, he says, while others picked up the sport in their mid- or even late thirties.

There is one constant, Wamsganz notes: Every member of the team has kids, and many are involved in their children’s sports and other extracurricular activities. As a result, one of the bigger challenges is getting a full roster of players each week that allows for rapid line changes to keep players fresh.

“People come, people go, people get hurt or get old,” Wamsganz says about his forever-changing lineup. “But the competition is intense. And it’s the one hour of the week when you forget everything else in your life because you’re so focused on the game. And it’s such a blast!”