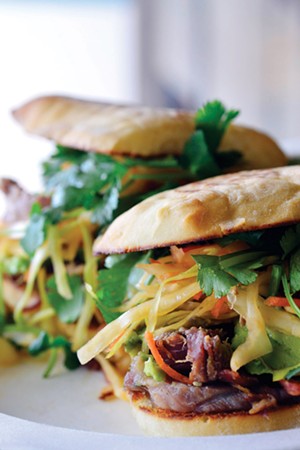 In Vermont, "south of the border" is more likely to be a reference to Canadian tourists venturing our way than to authentic Mexican cuisine. There's plenty of demand for tacos and carnitas, but few restaurants get it perfecto.

Perhaps part of the problem is the depressingly small population of real, live Latinos in the Green Mountain State. Or not. A Hungarian surname doesn't stop Joey Nagy from producing great Mexican fare in the Mad River Valley. It helps that the Southern California transplant spent time as a child with his uncle in Guadalajara and Mexico City.

Nagy marries Mexican tradition with Vermont's DIY sensibility. Whenever possible, he uses local ingredients and makes everything from scratch — for example, the kimchi he and his team ferment themselves in the Mad Taco kitchen. The spicy cured cabbage dish is native to Korea but makes a tasty topper for both tacos and tortas.

The Mad Taco staff has a way with vegetables, such as the crisp, cumin-scented squash served in a taco with black beans and cilantro. But there's a whole lotta meat on the menu, too. When he's not running a restaurant, Nagy makes whey-fed pigs into sausage as the Vermont Meat Company. Even his refried beans teem with hot pork fat.

Nagy's "other white meat" gets star treatment in the carnitas torta. The sandwich, served on a fluffy homemade roll, showcases two cuts of slow-cooked pig flesh. Although braising is customary, these chunks of pork shoulder are smoked, which gives a caramelized crunch to the creamy, well-marbled carnitas. Slabs of crisped belly add delicious fat to the dish — as does nature's mayonnaise, the avocado. Cilantro and tangy slaw cut through the heavy flavors like a cloud break.

Like most everything at the Mad Taco, the hot sauces are made on-site. At any given time, about a dozen choices are on offer, often flavored with unusual ingredients such as local carrots. The heat scale ranges from one to 10, but most Vermonters start tearing up around five.

Or maybe they're simply overcome with emotion at having found the state's most elusive dish: the perfect taco.