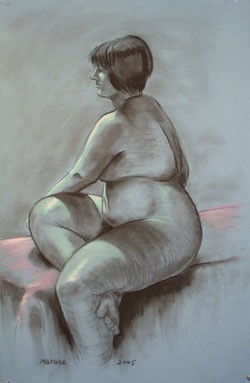 Just as musicians practice with scales and études, visual artists have always sharpened their chops with figure drawings. But practice doesn’t mean drudgery. The 25 untitled figure drawings by John Matusz now showing at The Men’s Room in Burlington are alive with investigation and discovery. The large-scale works on paper, measuring as much as 24 by 36 inches, show the artist focusing on an array of challenges as he draws. His figures evince his attention to line, mass, proportions and composition.

The drawings, all in charcoal or conte crayon, date from 2004 to 2008. The media provide the artist with expressive textures, a range of weights of line and rich tonalities. Eleven of the drawings are on white paper. One of these shows a female nude in four different standing poses, three of them viewed from the back. Matusz captured the elasticity of the model’s spine as she twists, and the relationships among her arms, shoulders and back as she reaches upward.

Several of the pieces on white paper feature multiple views, while others represent different attempts at capturing particular details. In a session with a male model, Matusz worked and reworked the head. It’s not that he was concerned with a physical likeness; rather, he seems to have been interested in the bulkiness of the form. The figure’s geometric qualities are ascendant.

A horizontally oriented sequence of four standing poses includes loosely rendered backgrounds. Edging the figure in an abstract black space is somewhat like chiseling a form out of stone: The background throws the figure into high relief.

A female nude reposing under a sheet, her head on a pillow, is contrasted with vertical strokes in the negative space. The placement of the figure on the torn-off page gives the image a sense of calm. Matusz was apparently most interested in the light patterns of the pose, capturing subtle folds in the sheet and pillow, as well as highlights in the figure.

Matusz is a noted Vermont sculptor, and even though he’s usually an abstractionist in that work, there’s a strong relationship between it and his drawing. An unusual wiry figurative sculpture entitled “The Wrestler” is included in the exhibition at The Men’s Room. It resembles a three-dimensional gesture drawing, while the drawings on display have a sculptural presence, especially the pieces on blue paper at the back of the salon.

These blue-paper figure drawings seem a little more formal. In addition to black lines, Matusz rendered highlights with white conte and occasional blue or pink chalk. One image of a chunky female model appears particularly sculptural, her mass defined by shadows. Matusz also lightly delineates negative spaces above this figure, while illustrating the model’s weight on the surface where she resides.

One of the more notable drawings on blue paper depicts a standing male nude seen from behind, who leans on an undefined fixture at left. White conte highlights and shadows — borderline-geometric forms rippling over his back — give the model a strong presence. He’s a sturdy individual, and Matusz seems to see through the figure to note bones and muscle tone.

Nineteenth-century French master Jean Auguste Dominique Ingres wrote, “To draw does not mean simply to reproduce contours; drawing does not consist merely of line: drawing is also expression, the inner form, the plane, modeling.” Matusz seems to have a similar mind-set. Ingres was also the artist who, in 1855, advised the youth Edgar Degas to “draw lines, young man, many lines.” Again, Matusz seems to be on the same wavelength. His exhibition is as instructive as it is dramatic and beautiful.