Glynnis Fawkes Comic to Be Published in RESIST! 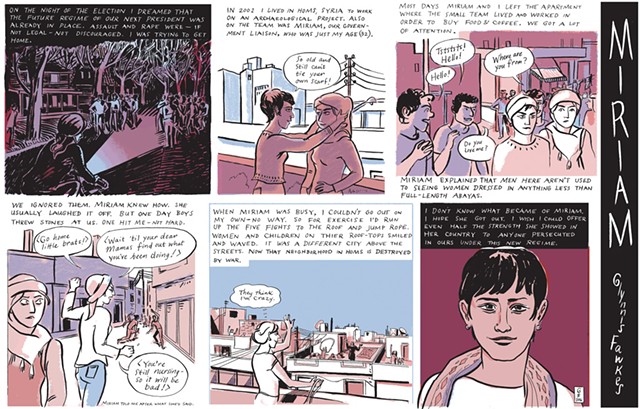 The evening of November 8, 2016, Burlington artist and illustrator Glynnis Fawkes had a dream about living in a different Burlington — one where, during a President Donald Trump administration, women alone in public had more to fear. Her nightmare sparked memories of a particularly tough female role model, Miriam Bshesh, who knew how to expertly ignore and rebuke street harassment. Shortly afterward, Fawkes was inspired to create a six-panel comic titled "Miriam." It will soon appear in RESIST!, a special publication being released before the presidential inauguration this month.

The free, 40-page newspaper features selections of political comics and graphics — mostly by women — culled from more than 1,000 submissions worldwide. RESIST! is guest-edited by New Yorker art editor Françoise Mouly and writer (and Mouly's daughter) Nadja Spiegelman. Brooklyn bookstore owner and publisher Gabe Fowler is currently printing 55,000 copies. The publication will be distributed in Washington, D.C., on inauguration weekend, January 20 to 22 — perhaps most aptly at the Women's March on Washington on January 21. RESIST! will also be available in New York, Dallas, Los Angeles, Des Moines, Portland and Chicago, and from the publication's website while supplies last.

"No artist who's engaged with the outside world can keep working as if nothing has happened," Fawkes said of Trump's election in a phone conversation. "The nightmare [in the comic] is a future society where norms have crept over to being very scary for women. It's a fear for the country that happened to be set in Burlington, because that's where I live."

"Miriam" arose from Fawkes' experience living in Homs, Syria, in 2002, where she worked as an archaeological illustrator. The artist recalled the attention she attracted, as a Western woman in her early thirties, from men in the streets. She was in awe of Bshesh's ability to navigate the continual harassment. As RESIST! brings women artists together to defy president-elect Trump's documented "pussy-grabbing" attitude toward women, Fawkes' cartoon is a reminder that fear of sexual harassment and bodily harm unites women across cultures.

Fawkes found RESIST!'s call for submissions through social media. Many of the submissions are available on the publication's website, including ones not included in the print edition. "Some are single-image political commentary," said Fawkes, "and some are autobiographical, or maybe fantasy or dystopian autobiographical."

Fawkes does not plan to attend the march in D.C. "I'm really glad to send this comic in my place," she said.