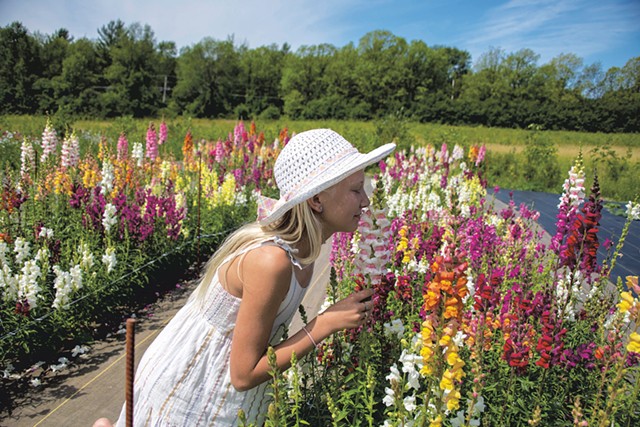 Christy Feiker sat under an open-sided tent in a field bursting with colors. Snapdragons, cosmos, bachelor buttons, marigolds, sunflowers and zinnias dotted the Charlotte meadow, with a view of the Green Mountains peeking through the trees behind her house.

With a pair of fine-tipped scissors, Feiker delicately trimmed excess leaves from the stems and, within minutes, created a gorgeous bouquet of flowers she had picked just minutes before. Though ostensibly "sitting" for an interview, Feiker seemed like the kind of woman who doesn't stay in one spot for long.

Christy and her husband, Knut, grew flowers as a hobby long before they ever considered doing it for a living. It was their school-age kids who first planted the seed of an idea that blossomed into the current family business.

Last summer, the Feikers' daughters, Solveig, 13, and Astri, 11, asked their mother if they could sell bouquets of her cut zinnias and sunflowers at the end of their driveway on Church Hill Road in Charlotte. On a typical weekend, the girls earned $30 per bouquet from passing drivers — an impressive haul when compared with, say, a roadside lemonade stand.

Then, last November, on a business trip in North Carolina, Christy stopped at a pick-your-own flower farm where she saw how much the customers enjoyed not just the bouquets but rambling through fields of flowers. The experience inspired her to start her own farm on her family's 12-acre property.

"Everyone was so happy and connecting ... and having so much fun outside," Christy recalled. "I feel like we have such a beautiful space. I want to share it with others, too."

Around the winter holidays, with help from their four kids, the Feikers began germinating seeds in their basement. By early spring, they had 8,000 seedlings in more than 100 trays basking under rows of grow lights. Glory Flower Farm was born.

"We have such a beautiful space. I want to share it with others, too." Christy Feiker tweet this

The farm now offers pick-your-own, organically grown flowers on Saturdays from 9 a.m. to 1 p.m. and Wednesdays from 4 to 7 p.m., through September. For $30, visitors get a pair of scissors and a pitcher to fill with their choice of more than two dozen flower varieties. Knut estimates that a full pitcher is equivalent to three supermarket-bought bouquets.

The Feikers plan to make their flower farm more than just a source of supplemental income during the warmer months. They want it to complement their broader professional missions of promoting natural healing and plant-based health maintenance.

As Knut put it, "It's our hope to give people an opportunity to experience being out in nature and just the healing that all the colors and smells can provide."

Flowers are a natural outgrowth of the healing work the Feikers were already doing before they moved to Vermont from suburban Milwaukee four years ago. Christy, who grew up in Milwaukee, once worked on restoring wildflowers to native prairies in Kettle Moraine State Forest in Kewaskum, Wis. Later, as a licensed midwife who helped deliver more than 300 babies, she often brought plant-based essential oils to help with the births.

Knut, who attended Warren Wilson College in Swannanoa, N.C., has worked as an organic gardener. As part of the college's community service requirement, he took a class in Appalachian folk medicine, which spurred his interest in natural healing and plant remedies. He now practices in Vermont as a chiropractor.

Life in suburban Milwaukee seemed fine, Knut recalled — except that he was working 12-hour weekdays as a chiropractor and finishing his paperwork on weekends. Christy's job involved long and often unpredictable hours, too.

"I was like, I really want to be with the kids while they're still young," Knut recalled. "You could tell it was affecting them not having their parents around as much."

So the Feikers decided to find jobs that would be conducive to a healthier work-life balance. For the last several years, they've sold essential oils, natural supplements and personal care products made by dTERRA. The Pleasant Grove, Utah-based essential oils company sources its raw materials from small, community-based farms worldwide. The Feikers believe their own budding flower farm is yet another way that fragrances can enhance people's health and well-being.

Unfortunately, many of the cut flowers Americans enjoy provide more reasons to feel anxious and depressed, given their less-than-rosy environmental impacts. According to the Observatory of Economic Complexity, 80 percent of the cut flowers sold in the U.S. are imported, primarily from Colombia and Ecuador. Flowers for export are typically grown using synthetic pesticides and herbicides that are toxic to bees and other pollinators. The process of transporting them thousands of miles and storing them in refrigerated cargo holds and warehouses further contributes to the release of hydrofluorocarbons and other greenhouse gases.

For these reasons, the American flower industry has seen the rise of the so-called "slow flower movement," which encourages consumers to buy local, seasonal and synthetic-pesticide-free floral bouquets — like the ones the Feikers offer.

"This has honestly been the hardest I've ever worked in my life," Christy said, as she trimmed leaves from stems on a recent sunny afternoon. Because the Feikers didn't start their pick-your-own flower business until November, they didn't have a hoop house built in time for the spring hardening-off process.

Normally, farmers put young plants in hoop houses for a week to acclimate them before planting them. "They're very happy outside," Christy explained, "but you don't want to leave them out overnight when it's early in the season" and can still get cold.

So, every day for about three weeks, the Feikers hauled dozens of seedling trays outside each morning, then brought them inside again each night. The rest of the day, they readied their fields for planting using organic compost and a no-till method that Knut had read about.

The farm has been Christy's full-time job since the spring. Knut still does some shifts as a chiropractor, but the farm and herbal supplements are their primary sources of income.

The Feikers' pick-your-own flower operation appears to have sprouted in an unoccupied niche. A handful of commercial growers in Chittenden County, such as the Intervale Community Farm in Burlington, offer pick-your-own flowers as part of their community-supported agriculture shares. Others, such as Vermont Wildflower Farm in Williston, sell seeds. Still others grow and sell flower bouquets for weddings, funerals and other formal events but don't offer pick-your-own.

Christy sought advice from the owners of the North Carolina flower farm she visited, but much of her prep for the season was sheer guesswork, taking risks and being willing to fail spectacularly, she said. The couple had no idea how many flowers to plant or how to estimate demand. Operating on a limited budget, the Feikers hadn't intended to install a sprinkler system — then quickly realized that watering by hand was time-consuming and impractical. They now use drip irrigation.

"I honestly just followed my joy," Christy said. "I felt a bit like a kid who was planning a birthday party without talking to the mom."

Thus far, the party's just getting started. At its soft opening on July 2, Glory Flower Farm received seven carloads of customers who came out to enjoy the blooms, walk around the farm, visit the family's two pet donkeys and go home with bouquets.

The fields of flowers have brought the family other rewards, too. In recent weeks, they've noticed more goldfinches, bluebirds, honeybees and butterflies on the property.

"I never realized how much I like flowers," Knut said. "It's something else having so much color in your field and beauty to enjoy."