GlobalFoundries Can Be Its Own Power Company, Regulators Say 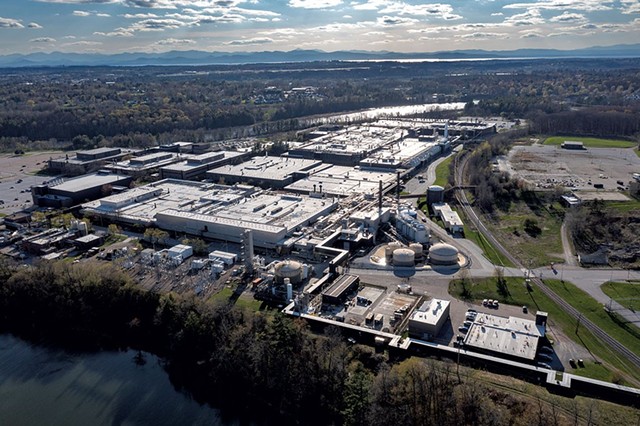 Regulators will allow semiconductor maker GlobalFoundries to form its own power utility as a way to help the company contain electricity costs at its Essex Junction plant.

The state Public Utility Commission issued a certificate of public good for the project on Friday after more than a year of review. The decision will allow the chipmaker, which uses 400,000 megawatt hours per year, or 8 percent of all the electricity in the state, to bypass Green Mountain Power and purchase power directly from the wholesale market.

Ken McAvey, vice president and general manager of the facility, said in a statement that he was pleased with the decision, which would help in “making our Essex Junction site more globally competitive.”

GlobalFoundries Asks to Leave Green Mountain Power to Form Its Own Utility
By Kevin McCallum
Tech
The company has long complained that power costs in Vermont are significantly more expensive than just over the border in New York, where it is headquartered and has other semiconductor fabrication factories.

The idea of sidestepping GMP, however, caused significant unease in several circles, even causing the PUC to reject GlobalFoundries' initial petition in February.

Related Regulators Deny GlobalFoundries' Bid to Be Its Own Power Company

Regulators Deny GlobalFoundries' Bid to Be Its Own Power Company
By Kevin McCallum
Off Message
The company is GMP’s largest customer by far, representing 10 percent of its sales, and the loss of that client has raised fears of a rate increases for other customers.

The company tried to mollify those concerns by making the transition to its own utility, which will be called GF Power, over four years and paying a $15.6 million transition fee to the utility.

Environmental groups worried that the chip maker would be allowed to bypass regulations that require utilities to purchase or support renewable energy in the state. The company, which employs 2,000 people, resolved that issue earlier this year when it agreed to build a 5 megawatt solar array in Essex Junction. The pledge led the Conservation Law Foundation to drop its opposition to the company’s request.

GlobalFoundries Lauds Leahy for Latest Infusion of Federal Cash
By Kevin McCallum
News
“The PUC’s decision is good news for Vermont. This type of regulatory innovation will lead to increased investment and modernization in the GF Vermont semiconductor facility in Essex, ensuring a continued commitment to our state," Betsy Bishop, president of the Vermont Chamber of Commerce, said in a statement.

Earlier this week, the company celebrated news that outgoing U.S Sen. Patrick Leahy (D-Vt.) had secured $30 million in federal funding to help it develop the next generation of powerful semiconductors.


Instead of being manufactured directly on thin silicon wafers, the new chips would contain a layer of gallium nitride, or GaN, that can handle the higher power needed for a range of electronic applications.