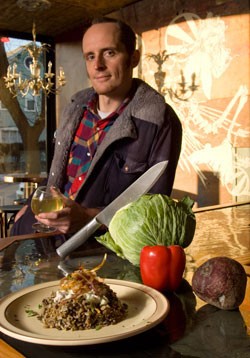 In the last month, Burlington café-bar Radio Bean and its sister restaurant, ¡Duino! (Duende), have lost a chef and gained a new general manager. First chef Richard Witting left to work full time at Dish Catering and was replaced by the restaurant’s owner, Lee Anderson. Now Anderson has hired Lily Sickles, who recently moved to Burlington from New York City, where she managed a wide range of restaurants. She has also completed the French Culinary Institute’s wine program.

“I just really want to dive in head first,” says Sickles, who plans to introduce a new lunch menu in the next few weeks. Brunch will follow in a month or two. “This is such a great brunch town,” she says. “I’m from New York. I’m all about brunch.” Though she and Anderson are still in the early menu-planning stages, Sickles promises the morning meal will stay true to the restaurant’s global-street-food concept.

Witting will return to cook special themed dinners on Sundays and Mondays during the month of October. Until then, diners can sample Anderson’s Ethiopian dinners every Tuesday. Folks can choose up to five dishes from a list of eight different East African classics. Every meal comes with injera, a fluffy sourdough crêpe Ethiopians use in place of utensils, plus salad and a spicy pepper sauce called awaze.