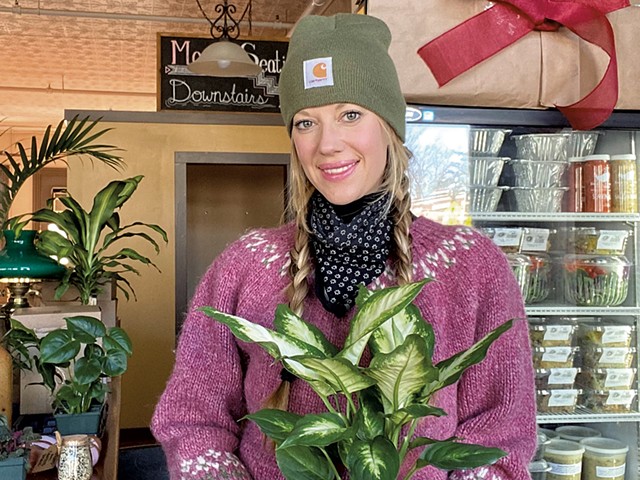 A once-vacant storefront on Middlebury's Merchants Row is now a plant-filled retail space that's home to something known as the Giving Fridge.

Customers can buy houseplants, jars of local honey or even antiques. Every $10 spent or donated goes directly to buying a meal for someone in need, cooked up by a local restaurant.

"It started with the goal of 250 meals, just a small project," said creator Bethanie Farrell, "and the combination of the need that has revealed itself, paired with the community enthusiasm and support, has kept it going."

Farrell came up with the idea around Thanksgiving after reading some sobering statistics about food insecurity in Vermont. With some storefronts in Middlebury vacant, Farrell got permission to use the space at 24 Merchants Row until the next tenant moves in, then pitched her idea to several restaurants. Many signed on, including the Arcadian, Two Brothers Tavern, American Flatbread, the Middlebury Food Co-op, Sabai Sabai and Park Squeeze in Vergennes. Farrell also lined up donated plants from the Middlebury Agway and honey from Ridgeline Apiaries in Panton.

After she opened her doors on December 23, demand exploded. Anyone can reserve a meal online at careofvt.com.

Farrell has a few volunteers who help with meal deliveries, and dozens of others have donated money or houseplants to sell. She staffs the storefront from 2 to 4 p.m. on Sundays and Mondays.

Farrell thinks the model could work in other towns, and she hopes to consult with municipalities that are interested in setting up similar services.

"It's definitely highlighting the fact that the need has increased, but also that it will continue to increase," Farrell said, noting that the pandemic is a long way from over. "With all the great food suppliers and farms and restaurants we have, there really isn't any reason we shouldn't be able to come together to make sure nobody's hungry."

The original print version of this article was headlined "Full Fridge"