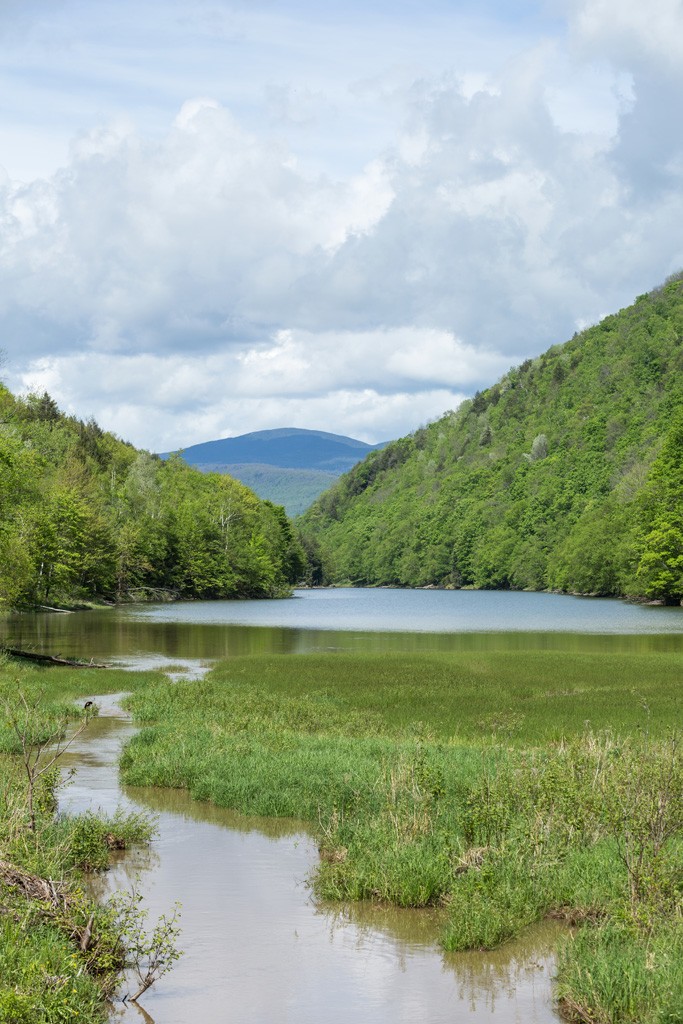 A pre-storm calm hung over Gillett Pond as Robert Low pointed out winter wrens and spotted sandpipers from the stern of his canoe. Low has lived at the northern tip of the body of water for nearly half a century, but his birding trips may be numbered. The pond's owner plans to drain it.

The mile-long pond spans two towns — Richmond and Huntington — and has provided residents a reservoir of memories, from otter spottings to ice-skating parties. Who would want to destroy that?

Hint: Think green-sashed girls selling Samoas. Despite the protests of Gillett Pond-goers, the Girl Scouts of the Green and White Mountains are poised to pull the plug. The group has owned a 300-acre parcel, including the pond, since 1950, according to Patricia Mellor, chief executive officer of the Vermont and New Hampshire chapter.

Gillett Pond wouldn't exist without the dam at its northern end. The structure was already fragile when heavy rains turned it into a mound of rubble last July. State inspectors recommended the Girl Scouts either repair it or remove the dam in a controlled breach that would slowly turn the pond into a wetland.

Leeches and underwater weeds rule out swimming, but plenty of residents come to skate, cross-country ski, canoe and fish in, on and around Gillett Pond. During the last 30 years, they've recorded 138 bird species in the secluded area and mammals including mink and moose. Wright Preston of the Richmond Land Trust said his organization periodically conducts wildlife studies in the area to determine what they should protect, and "Gillett Pond always rises to the top."

But for the Girl Scout troops that stay at the nearby Camp Twin Hills, "There's no benefit to us whatsoever," Mellor said. They'd actually prefer a bog, she explained. "Our girls primarily use the pond for environmental study. If we return it to its natural state, it will be a better area for study, for our programming purposes." Activities at Twin Hills range from archery to glitter art, according to the organization's website. 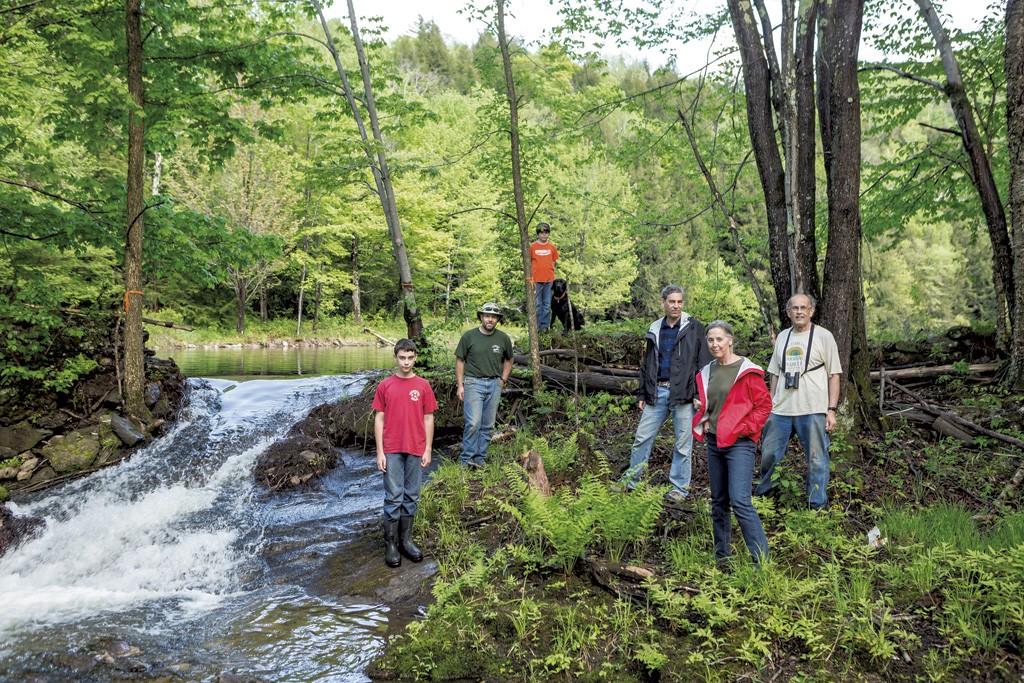 When residents got word last fall that the Girl Scouts planned to remove the dam — a step that would doom the pond — they organized Friends of Gillett Pond and have been meeting almost every other week.

Low, a self-described ringleader, walks with a slight limp and is wearing a worn yellow T-shirt, work jeans and duck boots. He rattles off facts about the pond as he wheels his canoe cart over stones and shrubbery on the short walk from his house to the water. According to his research, it has existed since the early 1800s.

That long history is part of the pond's appeal for Huntington residents Megs and Duncan Keir, who have lived near the southern end for 34 years. Duncan Keir said he's talked to a few old-timers who remember when people used to cut blocks of ice from the pond to keep milk cold at the dairy creamery.

For all of those reasons, the Friends of Gillett Pond want to buy the pond and 88 adjacent acres.

In theory, the Girl Scouts are willing to sell.

So what's the problem?

The state Agency of Natural Resources website warns, "The decision to acquire and own even a small dam is a major one that will result in long-term legal and financial obligations. A careful investigation of the costs and benefits is imperative..."

Those costs have grown over the years. According to Low's research, the Girl Scouts were considering making repairs to the dam as early as the 1960s, when the price was estimated at $5,440. Now it could cost as much as half a million.

The upfront costs aren't the hitch, according to Low. "The hooker," he said, "is who will take over the long-term responsibility." Somebody would have to pay for maintenance and insurance on the dam.

Transferring a dam — and the liability for it — from one owner to another isn't as easy as writing a check. The Girl Scouts want to be sure the Friends can raise the funds before they agree to sell, according to Mellor — and they don't want responsibility if the dam washes out in the meantime. The Friends say they need assurance that the Girl Scouts will sell before they can start fundraising.

Mellor calls it a Catch-22.

Although the state has classified it as a "low-hazard" dam, in part because no houses would be affected by rising water, a sudden flood could result in a fluke accident. Collapse is "imminent," Mellor said, "so we have real concerns for what that could mean for anyone downstream."

Engineers for the Girl Scouts have recommended breaching the dam as soon as possible to reduce the risk of collapse. The board of directors voted to heed that advice, and the organization is filling out the permitting paperwork to move forward in late summer or early fall, according to Mellor.

That might bring the Girl Scouts Board of Directors peace of mind, but it will also make salvaging the situation "essentially impossible," according to Low. The state wants fewer artificial bodies of water, not more, and so is disinclined to permit new dams.

"The general preference from a water-management point of view," said Rep. Rebecca Ellis, who represents Huntington, "is to have free run of water." Ellis and Rep. Anne O'Brien, who represents Richmond, have organized meetings between the Friends and ANR officials.

"It's hard because I feel like we are the bad guys in this, and we certainly don't want to be in this position," Mellor said. "We are between a rock and a hard place, or a rock and a really bad dam."

One possible solution: The Friends have roped in several groups with fundraising finesse, including the Richmond Land Trust and the Vermont River Conservancy. Steven Libby, executive director of the River Conservancy, said protecting the pond is "worth a full-court press." His group has proposed a lease-and-purchase agreement that would immediately bring the pond under their insurance policy. Libby is hopeful that will address the Girl Scouts' concerns, but he noted "there is never a sure thing with liability."

Mellor said she's open to the offer, which is under review by the Girl Scouts' lawyers.

"The big issue," according to Ellis, "is one of timing."

To show the depth of the community's support, they sent out a survey about how people use the pond. It generated 200 responses. "There's just been a real coalescence of energy around finding a solution," O'Brien said. Front Porch Forum postings have spawned hundreds of emails among concerned neighbors, according to Keir.

Low, it turns out, is an acclaimed academic — a professor of physiology at the University of Vermont, who has several times served as interim provost.

He approaches the pond with childlike wonder, fawning over the beavers he credits with patching holes in the dam — "They can be a nuisance but we think they are rather precious." And coaxing birds — "I want the winter wren to sing again!"