The Green Mountain Derby Dames roll out a rousing tournament 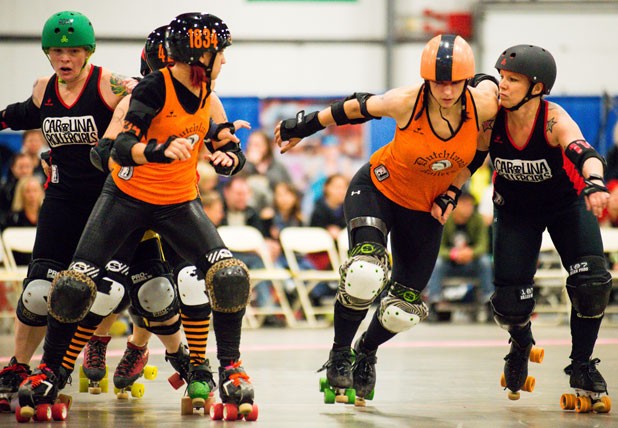 The colors we usually associate with this time of year are autumnal bursts of red, gold and orange. But what about hot pink? Fluorescent green? Black? These dominated one corner of the Burlington area last weekend at an event that brought people from as far away as Germany — people less interested in the foliage than in the unrivaled intensity of women slamming into each other on roller skates.

The event was the Women’s Flat Track Derby Association (WFTDA) East Region Playoffs, hosted by the Green Mountain Derby Dames and Montréal Roller Derby. It was three days of back-to-back derby, with the top 10 teams in the region — including contenders from New York, Philadelphia, Montréal and even London — competing in 17 bouts to determine who would go on to the final Atlanta championships in November. Simply put, it was fast, colorful, fanatical and totally brutal.

If you live in the Essex Junction area, perhaps you heard the cheering crowd at the Champlain Valley Expo, or the body slams in the ring and the sound of flesh hitting concrete. Perhaps you wandered toward the sounds, distracted from the foliage’s early blush. After all, who wants to watch leaves fall when world-class derby dames are skating, fighting and colliding right next door?

For those unfamiliar with the sport, roller derby’s roots extend back to the 1930s, when a man named Leo Seltzer was persuaded to add more contact to his already-popular Transcontinental Roller Derby. The TRD was a simulation of a cross-country road race, wherein teams of two circled a wooden track thousands of times, skating for 11.5 hours a day for a month to cover 3000 miles — the distance between LA and New York City. As riveting as that sounds, Seltzer decided a change was in order, and he experimented with various forms of the game until a shorter, team-based contact sport emerged.

These are the basic rules: Two teams of five skate counterclockwise around a track. Each team has a “jammer,” who begins behind a pack of opposing “blockers.” After she has passed each blocker once, the jammer gets a point for each opposition team member she passes again. The opposing team does everything humanly possible to prevent the jammer from passing — and that’s where things get interesting.

In the 1970s, roller derby became less an athletic event and more a World Wrestling Federation-esque circus show, with orchestrated theatricality replacing genuine sportsmanship. It wasn’t until the early 2000s that roller derby as it was seen last weekend — an all-female, no-BS contact sport, still kitschy but no longer scripted — broke onto the scene. Since then, women’s derby has exploded across the globe, with more than 1200 amateur leagues worldwide. WFTDA comprises 156 member leagues — including the Green Mountain Derby Dames — and 93 affiliated leagues around the world.

Although they weren’t among the 10 competing teams, last weekend’s tournament was a chance for the GMDD to solidify their standing in the world of derby. The team is gaining a strong reputation in the region, but it wasn’t always that way.

That didn’t stop them. After learning what they could on their own, the Derby Dames invited New Hampshire Roller Derby over to show them some moves; they also learned from Jeffery’s sister, who had been playing in Boston since 2006. Since then, interest in the team has snowballed; about 40 local women are now involved, and they have fans aplenty.

Last May, during the annual WFTDA conference in Las Vegas, other northeastern teams suggested the Green Mountain Derby Dames put in a bid to host this year’s East Region Playoffs. It was big news for the team when they succeeded.

“We were thrilled,” says Jeffery. “We’ve seen these teams play all over the Northeast, and we really just wanted to show them our state that we’re so proud of, and why we love living here, and that roller derby is alive and well in Vermont.”

Cohosting with Montréal — a team with more international name recognition — offered a chance to add a little “oomph” to the tournament, Jeffery says.

A game I saw last weekend had oomph to spare. Walking through the expo entrance at 11 a.m., I was caught off guard by the fervor in the venue. On the track, two teams — Boston and Washington, D.C. — warmed up for their fast-approaching game, huddled together in wheeled lines of scrimmage, struggling with a jammer who sought to push her way through the battle zone. Their names were printed on the backs of their uniforms — “Velocityraptor,” “Lenore Gore,” “Dual Hitizen” — and they sported variations on the typical derby get-up: colored, tight-fitting jerseys; leggings; and knee-high socks, all punctuated with thick, heavy-duty safety pads.

The Boston Dames had dark-blue, V-neck jerseys with American flags on the front to match their red-white-and-blue-striped socks. The D.C. team sported red tops, black bottoms and, in some cases, fishnet stockings. Women on both teams showed more than a few tattoos — some players were covered from head to toe. As they geared up for the first jam, I couldn’t help but notice the looks in these women’s eyes: like those of bloodthirsty, punk-rock soldiers poised valiantly on the battlefront.

I sat down as the clock started, but soon found myself standing. In the audience, fans yelled, “Come on, D.C.!” and “Boston, Boston, pinch, pinch, pinch!” The refs — “Izzy Demented” and “Refsputin” among them — watched the game from the center of the ring, unfazed by the sheer brutality of it all.

Each jam began with a line of blockers from both teams kneeling to form a fortress a few feet in front of the two jammers. When the ref blew the whistle, the two jammers launched forward into the human barricade, struggling with all their might to breach the opposing team’s wall. But the blockers would have none of it: They stretched out their arms, leaned backward and elbowed the jammers in an attempt to knock them out of the ring. These efforts resulted in a momentary cluster of competing energies.

Then, like a racehorse released from its pen, one of the jammers shot out in front of the obstacle, thus claiming the title of “lead jammer.” The lead jammer hurried around the track in an effort to gain points by passing the opposition team’s members (jammer included), all the while facing body slams and elbows from the blockers. More than a few soldiers were felled, but they were glorious in their efforts.

Jams can technically last for up to two minutes, but, more often than not, after the lead jammer collected a few points, she tapped her hips, calling an end to the round before the other team’s jammer had a chance to score. And then it would start all over again.

After an intense hour and a half, the Boston Massacre emerged victorious — 226 to 131 — but not without a good fight from the D.C. Rollergirls. After the game, breathless but elated in the afterglow of combat, the teams gathered in their respective corners.

That’s when I caught up with “Ivanna Shankabitch” of the Boston Massacre. I asked how she was feeling, and whether she had been expecting the big lead her team held on to throughout the game. Doe-eyed and tired, she responded earnestly, “Is it mean to say yes?”

After 17 high-intensity bouts over the jam-packed weekend, New York’s Gotham Girls, the Philly Roller Girls and Baltimore’s Charm City Roller Girls earned the right to advance to the year-end championships.

No doubt the tournament cemented the Green Mountain Derby Dames’ regional cred in the sport. Its members hope the games will spark even more local interest, on and off the track. It’s a tough sport, but, Jeffery insists, “Whatever body type or sports experience you have developed over your life outside of roller derby, there’s a place for you here.”