Gift Shopping in Burlington With an Eye for Vintage

One of the best gifts I've ever received was a floral fascinator from a vintage shop in Ottawa, a pile of dried flowers atop a headband that made me feel like a fairy. It was an absurd thing for a 13-year-old to own, and I had neither the occasion nor the confidence to wear it. But my grandma's best friend bought it for me anyway, because it was beautiful and she thought this was reason enough for me to have it.

This is what comes to mind when I ponder my own gift-giving philosophy. The best presents are either a slightly fancy version of something practical or delightfully frivolous. Either way, gifts must be something the recipients wouldn't think to buy for themselves — something that makes them feel seen and a little bit spoiled.

Thus, I implore you this holiday season: Consider vintage shops, where you can find unique, even heirloom gifts. Buying secondhand is not only more environmentally friendly, it makes for a more whimsical experience.

I took a day out on the town in Burlington to craft a shopping itinerary so you can appreciate all of the quirk Vermont's biggest city has to offer. The downtown district and its surrounding streets are an ideal place for checking everyone off your list.

My outing was in mid-November, so the status of in-person shopping could change in the lead-up to the holidays, or you may prefer some alternatives. In that case, many local stores offer online shopping, browsing by appointment or curbside pickup. Stay flexible and, of course, wear a mask, as all the shopkeepers and customers did while I was reporting. 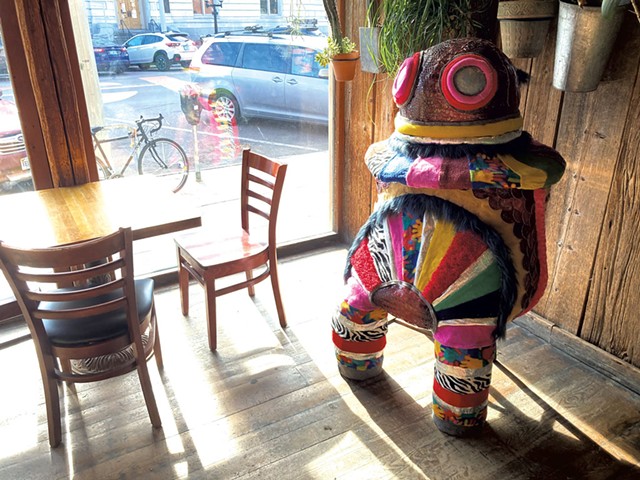 First: coffee. Muddy Waters, one of Burlington's coolest watering holes, has reopened its coffee counter and cozy dining area — with some new guests. Massive, neon, bug-eyed beasts occupy chairs and corners and hang from the ceiling, encouraging customers to sit apart from one another. They're called "Distance Beasts" and were created by Brooklyn/Burlington artist Abby Manock.

The beasts, covered in a chaotic rainbow of fabric and fur, are difficult to describe and absolutely worth seeing. I gawked at them while waiting for my mocha, then took the drink around the corner to the newly reopened City Hall Park.

After more than a year of hotly contested renovations, the park just west of Church Street is now a wide, open space dotted with trees, benches and brightly colored metal chairs. I took a seat in one, watching wild-haired kids slide down the stone steps of city hall.

At the Vault Collective, I met Vanessa Compton, one of the 10 sellers with an individual vintage "booth" inside the store. Each has their own unique style; Compton sources most of her wares in the Southwest, meaning lots of leather, Pendleton woolens and camouflage. She is also a visual artist who had a solo show at Soapbox Arts earlier this year. Compton is not the only tastemaker present: Vermont soul singer Kat Wright also has a booth. Her mannequin busts are topped with wide-brimmed hats, like those Wright might don onstage.

"You don't get rich doing this, but it's so fun. It's like treasure hunting," Compton said of curating vintage. She loves that everyone can find something to suit their personal expression. "The amount of men who come in here wearing eyeliner warms my heart," she said.

I lingered over some wool sweaters and noted a pair of outrageous cat-eye sunglasses that my best friend would rock. But it was next door at Old Gold where I found a gift jackpot: a gray wool beret that I could immediately picture atop the head of my ginger-haired former roommate. Done. Delightfully frivolous is our aim, remember?

I also thumbed through the rack of flannels, thinking that a stack of cozy vintage plaid, freshly laundered and bound up in ribbon, would be the perfect gift for my dad. Then a rack of polyester button-ups caught my eye, just the thing for any young person who wants to look like Harry Styles. (The '70s are very much back, which could be thrilling or terrifying for those who lived through them the first time.) If you want to get something wild for the teen in your life, something that will make them gasp upon opening it, Old Gold is the place.

A few blocks away is Cherry, a new retail venture in the former home of the Light Club Lamp Shop bar. I popped in to chat with owner Lee Anderson, who also runs Radio Bean and the new restaurant C'est Ça, all on the same block of North Winooski Avenue. Though I was still mourning the loss of the Lamp Shop, one of my favorite Burlington bars, I was excited to see its eclectic aesthetic live on at Cherry.

As it turns out, that's just Anderson's taste. He's drawn to midcentury wares and classic vintage, along with totally eccentric pieces — such as two standing lamps shaped like jesters that he said once adorned the home of actress Mary Tyler Moore. Anderson has rotary telephones, vintage art and, of course, a vast array of lighting fixtures.

"Most people walk in here, and they're like, 'Oh, my gosh, look at all this cool stuff,'" Anderson said. "I'm just happy to spark joy in people."

The next stop on our tour is also on the north end of downtown, so I took a brief hiatus from my shopping to grab a tuna melt from the Top of the Block Sandwich Shoppe, a true hole-in-the-wall inside a turreted brick building. I figured the retro, all-American sandwich was a good fit for the day's theme, and I appreciated the tangy kick of banana peppers tucked into the grilled wrap.

From there it was just a few steps to Crow Bookshop, with its ever-changing stock of used books. It's a place to find secondhand copies of works by Vermont heavy hitters such as Bill McKibben, Chris Bohjalian and Major Jackson, along with guidebooks, Vermont history and a cookbook for every diet. I picked up a Mavis Staples biography for my partner and quickly forced myself out the door, lest I add to my ever-growing personal pile of must-reads.

My day was winding down, but I still wanted to make one last stop. A quick drive down Pine Street landed me at Barge Canal Market, a gem of a vintage furniture store in Burlington's artsy South End. Owners Adelle Lawrence and Jeremy Smith put incredible care into the arrangement of the shop, making a maze of staged, themed "rooms" that feel like a cross between IKEA and an art gallery. Exploring it is a delight in normal times, but the pair goes all-out for Christmas. They closed for three days to transform the space into a classy, rustic winter wonderland.

Lawrence is happy to make holiday shopping "a destination, not an obligation," she said. A vintage gift is "heirloom worthy, something that someone could have a long time." Alongside clothes, furniture, rugs, tchotchkes and a stunning array of glassware, Barge Canal sells an exclusive line of shirts designed by artist and employee Julianna Brazill, screen-printed just across the street at Unknown Arts.

While I wandered, I overheard a customer tell Smith she'd tried to get a Christmas tree that day but found she was too early. "If there was ever a year to start Christmas early..." she said.

Another pair of shoppers cooed at the holiday displays. "I do have a weakness for vintage Christmas," one confessed.

I picked up a few stickers designed by Brazill to tuck in the next letter to my pen pal and, contemplating the unknown nature of the Christmas season and how the pandemic would allow me to spend it, dropped $10 on a vinyl record from 1970 titled A Very Merry Christmas Volume IV.