Gibbs and the Gov: Is Scott's Chief of Staff Running the Show? 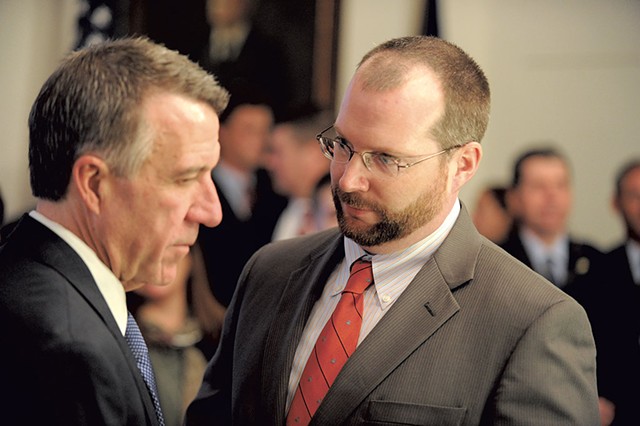 The first item Gov. Phil Scott's chief of staff showed a visitor to his office last Tuesday morning was the hefty stack of papers on his desk. "This is my inbox — already," Jason Gibbs said in a tone suggesting the pile was a source of satisfaction, not stress.

All documents stop at his desk before going to Vermont's new Republican chief executive, he explained: "You have to know what needs to go to the governor, because the volume of information that flows through this office is far greater than any one person's ability to manage."

Unlike Scott and most of his staff, this is Gibbs' second stint in the executive office. He spent eight years as press secretary, adviser and commissioner under governor Jim Douglas, who left office in 2011.

Now, as Scott's chief of staff, the zealous 40-year-old is already a prominent presence on the fifth floor of the Pavilion Building — and he seems poised to play an unusually powerful role in the new administration.

In addition to acting as information gatekeeper, Gibbs manages the 18 staff members who work directly for Scott, serves as a senior adviser and ensures that the entire administration runs smoothly.

"So much of the actual functioning of state government falls under the chief of staff's responsibilities," said Bill Lofy, who held the position under former Democratic governor Peter Shumlin. Or, as Douglas put it, "The chief of staff is the person who keeps the trains running on time."

By many accounts, Scott's administration is off to a halting start. The new governor irked Republican lawmakers by reappointing top Shumlin officials and failed to seek legislative input while drawing up the state budget. When it was unveiled last month, Democratic lawmakers panned the budget's centerpiece — a plan to freeze school spending — as unconstitutional, error-ridden and impossible to implement.

The real problem, Gibbs counters, is that, "The legislature has so far been really reluctant to allow the executive branch the latitude it needs to change the way it does business."

Gibbs started to hone his rhetorical skills as a teenager, when he was a distinguished member of Otter Valley Union High School's debate team. Like his boss, the Brandon native has blue-collar roots. He was the first person in his family to earn a college degree, majoring in political science at the University of Massachusetts Amherst. Gibbs' father worked at GE Aviation and served in the U.S. Army Reserve; his mother was a bank teller and a bookkeeper.

In his mid-twenties, Gibbs left his job as a spokesperson for what was then Fletcher Allen Hospital to work on Douglas' 2002 gubernatorial campaign. His primary duty: driving Douglas around in the candidate's Dodge Neon. According to Jim Barnett, deputy campaign manager at the time, Gibbs quickly became an aide-de-camp to the governor-to-be.

The late Seven Days political columnist Peter Freyne dubbed Gibbs, Barnett and campaign manager Neale Lunderville "The Nasty Boys" — a reference to their youth and propensity for combative campaign tactics. "When we were young," Lunderville confessed, "we would rush into every fight instead of analyzing it." But, he added, "I think we've all kind of calmed down a bit."

Douglas, who, upon taking office appointed his chauffeur to be communications director, described Gibbs as "very savvy about politics."

"He's one of the smartest guys I know," said Sabina Haskell, who was a journalist while Gibbs was communications director and later worked with him as Douglas' deputy secretary of the Agency of Natural Resources.

Gibbs is viewed less fondly outside of Douglas' inner circle. As a Republican state senator, Vince Illuzzi clashed with the Douglas administration over how to address a sarcoidosis outbreak in a Bennington state office building. Illuzzi, now a lobbyist for the Vermont State Employees' Association, remembered Gibbs as "probably the most adversarial administration spokesperson I've ever dealt with."

After six years, Gibbs became commissioner of the Department of Forests, Parks and Recreation, where he oversaw a staff of roughly 100 and, according to Douglas, introduced fiscal discipline and innovative policy ideas.

Gibbs left the department in May 2010 to run for secretary of state. He won the Republican primary but lost by 10 points to Democratic former senator Jim Condos in the general election.

During the campaign, Condos issued a press release arguing that Gibbs "believes, fosters and embraces the politics of personal destruction — right out of the GOP–Karl Rove playbook — which he has been following for the last eight years in the Douglas administration."

Gibbs went on to spend two years as marketing director at Ski Vermont and then left to start his own communications business. Behind the scenes, he was among the Republicans urging Scott to challenge Shumlin in the 2014 election. And when the lieutenant governor did decide to run for governor in 2016, Gibbs came on as an unpaid adviser.

"He has a very good track record of being on the successful side of Republican candidates in a very blue state," said Sen. Dustin Degree (R-Franklin), who worked with Gibbs in Douglas' office and has sought his advice in his own campaigns.

Chief of staff was one of the first positions Scott filled.

"He's extremely talented, very intelligent and has just been a great supporter," the governor said.

"The fact that I have had a second bite of this apple is mind-blowing," Gibbs said last Tuesday during an interview in his new digs. "There's nothing like working in the governor's office." The Duxbury Republican has a reddish beard and rimless glasses, and drinks coffee at the rate of a college student cramming for finals.

His quarters are located a few paces away from the governor's suite. A painting of a Vermont hamlet hangs on one wall; it used to be in Douglas' office.

Gibbs returns to the fifth floor as Scott's most seasoned political adviser. Among the executive team, which Gibbs helped assemble, Secretary of Administration Susanne Young is the only other senior staffer with experience in a governor's office.

Far more voluble and excitable than his boss, Gibbs spoke to a reporter for three hours — mostly about ideas for restructuring state government. "I can get pulled into the weeds pretty quickly," he said.

"It's fair to say that Gov. Scott has a real clear view of what he wants to accomplish in Vermont, and it's a substantive view," said Lunderville, who played a lead role developing Scott's budget proposal. "What Jason brings is a lot of the ideas behind how to achieve that vision."

Gibbs describes himself as a "policy dork of the highest degree," but he is best known for his ability to package — and sell — those policies.

"Jason, in comparison to Phil Scott, will be the guy that looks to the political ramifications of things," said Degree. "The governor is wired in a different way."

Scott said as much in an interview: "It's no secret that [Gibbs] enjoys politics. That's something he truly has a passion for and maybe less so for me ... so I think we do complement each other."

Gibbs, for instance, wanted to name his daughter Reagan after the Republican president. His Democratic wife, Amy, vetoed the proposal, and they settled on Addison instead, after the county.

Gibbs said he encourages younger staffers to maintain a campaign-like mentality in their work: "When you look at a project like a campaign and you define what winning is on a project, you're much more likely to get to the result you're looking for than if you just approach it as a job."

Barnett, who now runs a political communications business in Washington, D.C., suggested this philosophy will serve Scott well: "Gov. Scott is, by his nature, a competitor but also a consensus builder. I imagine he sees in Jason someone whose instinct is to fight to win, but also someone who has also been around long enough to know that it's the job of the chief to put out the fire at the end of the night."

Gibbs is certainly comfortable handling controversy. His first job out of college was working as a spokesperson for the infamous Boston tunnel project known as the Big Dig. "Every day, I'd go in, and it's a complete mess — yogurt hitting the fan everyday — and I'm like, 'This is awesome,'" he recalled.

But as chief of staff, he runs the danger of creating the controversy.

Gibbs offended Statehouse denizens earlier this month when the Barre-Montpelier Times Argus and the Rutland Herald published a story about a directive he gave to staff and cabinet members, warning them that fraternizing with lobbyists and lawmakers after hours could be "counterproductive."

The story was "overblown," according to Gibbs, but several weeks later, it's one of the first things people in the building mention when his name comes up.

It's not just Democrats who've had complaints.

During the first few weeks of Scott's tenure, House Minority Leader Don Turner (R-Milton) publicly expressed displeasure that the governor's political appointments included a number of holdovers from the Shumlin administration. "The governor understood, totally," Turner recalled, but his opinion "wasn't well received" by Gibbs and some other staff members.

"We've gotten through it," said Turner. "We're going to work with these people just like we worked with the last administration."

Keeping party members and staffers in line is the chief of staff's job, as is playing the role of "bad cop," according to Lofy. "You may not want the governor to get into a heated conversation with either a legislator or an advocate ... A chief of staff has a little more, shall we say, flexibility in delivering bad news or being a tough negotiator."

Gibbs agreed: "One of my responsibilities is to be the person who expresses frustration and anger and disappointment so the governor doesn't have to."

With that in mind, he said, "I have had conversations with legislators that have been, um, direct."

Gibbs could, however, undermine Scott's signature strength: a reputation for congeniality and collaboration.

The moderate governor has taken flak from more conservative constituents for speaking out against President Donald Trump's executive orders limiting immigration. When a former supporter criticized Scott on Facebook, Gibbs jumped into the discussion. At one point, he blamed the media for inaccurately reporting the administration's approach and sensationalizing the news.

But afterward, reporters clustered around his chief of staff for his explanation. Gibbs was calm as he detailed his complaints with the news coverage for several minutes. In doing so, he snubbed reporters and stole the spotlight from his boss, without managing to placate upset Republicans. For a moment, Scott stood awkwardly outside the scrum, which blocked his way out of the ceremonial office. Kelley broke up the crowd to clear a path for him.

Asked about the governor's take on the situation, Gibbs said, "I think he would have preferred that I kept my opinion to myself."