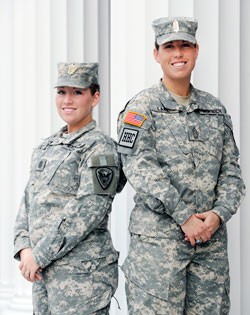 Traditions run deep at Norwich University, the nation’s oldest private military college, and few traditions are more sacred to military life than the Corps of Cadets’ morning lineup to salute the American flag as it runs up the flagpole.

One cadet standing in front of the formation looks as spit-and-polished as they come: pressed blue-gray tunic and slacks, shiny black shoes, gold-trimmed cap pulled low over her eyes, hands cupped at her sides. Except for the additional stripes on her shoulders that indicate she’s the regimental commander, this student leader looks like any of Norwich’s 1123 military-bound cadets.

And that’s exactly how Regimental Commander Alison Lanz and her second officer, Deputy Commander Jessica Corl, expect to be treated: like superior officers who’ve risen through the ranks through hard work and determination.

Lanz and Corl, both 22, aren’t comfortable making a big deal about the historic significance of their command. This is the first time in Norwich’s 191-year history that the Corps of Cadets has been led by two women. But, as Corl puts it, “We don’t want to be glorified because we’re women. We want to stand out because of the work we’ve done.”

That sentiment is understandable coming from two women who grew up in an era when equal treatment of the sexes was both expected and commonplace. Still, they’ve reached this goal in part because of Norwich’s history of breaking rank with the military establishment to promote gender equality.

In 1974, Norwich became the first military college in the country to fully and voluntarily integrate women when it admitted females to its corps for the first time. By contrast, it took an act of Congress in 1975 to force West Point, the U.S. Naval Academy at Annapolis and the Air Force Academy to open their doors to women. Even then, lingering sexism and institutional resistance to a coed military helped make failure rates for women at those schools twice as high as those for men.

Times have changed. Today, the presence of two females at the head of Norwich’s Corps of Cadets, the on-campus military company, speaks volumes about the armed forces’ growing reliance on women to fill their ranks. At a time when the United States is engaged in two bloody and costly overseas wars, the opportunities for women to serve alongside men in critical combat and leadership roles have never been greater. Just last month, the Navy lifted its ban on women serving on submarines, one of the last gender barriers to fall for women. That move came just as the Army chief of staff said it was time to reconsider the prohibition of women serving in ground combat.

That fact isn’t lost on Lanz, who, upon graduation this spring, will enter the U.S. Army to train as a military intelligence officer at Fort Huachuca in Arizona; she expects to be deployed soon after. Though Army regulations officially prevent her from being assigned to an infantry, armor, artillery or special forces unit, Lanz knows that the realities on the ground in Iraq and Afghanistan are already eroding such barriers.

“Women are now going out on infantry patrols to search females,” Lanz explains. “In the wars we’re fighting right now, there are no front lines.”

Corl doesn’t see the restrictions on female personnel serving in certain combat roles as a hindrance to her career aspirations, either. After she graduates this spring, she’ll be heading to Davis-Monthan Air Force Base in Arizona to train as an officer in the security forces, which is akin to the Army’s military police.

“There are a lot of options for women in the military nowadays,” Corl says. “Personally, I’m content with it because there are so many opportunities. And the jobs some of those guys do I wouldn’t want to do anyway. But I can’t speak for other females.”

Lanz and Corl came to Norwich from very different backgrounds. Corl grew up in Wapwallopen, a small town in eastern Pennsylvania, in a family with strong military roots; she says she’s wanted to join the service since she was 10 years old. Her mother was in the Air Force, and her father, a Navy seaman, did three tours in Vietnam. Corl’s older brother also attended Norwich and, coincidentally, served as deputy commander. He’s now in the Air Force’s Office of Special Investigations, where, as Corl puts it, “He’s like a secret-agent man.”

Corl initially hoped to attend the U.S. Coast Guard Academy because of its highly respected shooting team — her parents own a retail gun business in Pennsylvania. She has competed in 10 national shooting championships and was well on her way to competing for the U.S. Olympic team when she landed an Air Force scholarship to Norwich.

Lanz, by contrast, had only limited exposure to the armed forces as a kid. A native of East Greenbush, N.Y., she had just one relative who served in the military — her grandfather, who never saw combat. Lanz’s mother is a civilian nurse; her father works on a road crew for the New York State Thruway Authority. It wasn’t until high school that Lanz began to seriously consider a career in the armed services.

“Everyone else [from my high school] goes to SUNY schools,” says Lanz, referring to New York’s state college system. “I just thought I’d do something different.”

The Corps of Cadets makes no special accommodations for women. Except for a few minor differences in their physical training standards, female cadets do virtually everything their male counterparts do. That means Lanz and Corl rose to the top through a combination of high grades, excellent PT scores and extensive extracurricular activities.

Those achievements are all the more impressive when you consider that female cadets are still very much a minority at Norwich. Of the 1123 cadets in the Corps this spring, only 162, or 14.4 percent, are women. Those numbers are consistent with the numbers at U.S. service academies and other senior military colleges. Women make up 16 percent of the student body at Annapolis, 15 percent at West Point, 12 percent of the Air Force Academy and 8 percent of the Citadel, according to Department of Defense statistics.

What’s it like being a female commander in what is still a male-dominated environment? Lanz says she rarely gives it much thought.

“I think the culture isn’t so much whether you’re male or female, especially at Norwich, so much as, can you suck up the crappy parts of the school?” she says. “Can you get out of bed every morning and not complain about it? Can you physically and mentally endure it? That’s the important thing now.”

Which is not to suggest that gender is never an issue at Norwich. Lanz and Corl have both received reports of female “rooks,” or first-year cadets, being sexually harassed by their male counterparts. They emphasize that Norwich has a zero-tolerance policy for such behavior.

“I think we’ve all experienced it in one way or another over the years,” Corl says. Indeed, she describes Norwich as “the epicenter for rumors,” where women are frequently the subjects of unfounded and unflattering gossip.

For instance, Lanz tells of Sarah Patchem, who became Norwich’s first female regimental commander in 1997. According to an oft-repeated story on campus, during the promotion parade where Patchem assumed her new command, all the cadets turned their backs on her as she marched by. Though it’s a juicy story, it’s also apocryphal.

Corl herself hasn’t escaped Norwich’s rumor mill. “How many times have you been pregnant?” Lanz asks her jokingly.

“Five times this year already,” Corl replies with a smile.

On the flip side, Lanz says she and Corl have made it clear to their female cadets that they won’t be afforded special treatment just because they’re women.

“I hate to say this, but I think there may be some females who use being a female as an excuse,” Lanz says. Not surprisingly, Norwich still struggles to retain female cadets, who have a slightly higher dropout rate than their male counterparts. This year’s retention rate of female recruits from the first to second semester was 80 percent, versus 87 percent for male recruits.

Despite such challenges, women still occupy a disproportionate number of leadership positions within the Corps, an observation not lost on Brigadier Gen. Michael Kelley, the commandant of cadets. He says he’s been particularly impressed by the leadership styles of Lanz and Corl, whom he describes as “very no-nonsense and very driven ... without being arrogant.

“If you had a stereotype that a woman leader would be less firm or less demanding or less standard driven, that would be a poor stereotype when you think of these two women,” Kelley says. “I think the world of all our cadets, but there’s something very special about these two young women.”

Without many female role models on campus to learn from, Lanz and Corl say they’ve had to craft their own styles of leadership on the fly. In one case, Corl admits, that meant learning what not to do from a female commander she had in her freshman year.

“Instead of being a caring leader, she just scolded us, which completely turned me off,” Corl remembers. “That was one thing that we definitely wanted to do differently.”

For her part, Lanz says she never needed to put on a tough-guy persona to earn the respect of the administration or her subordinates.

“I think there are some females [in the military] who think they have something to prove,” she says. “I got the job being myself; Jess got the job by being herself. So why change?”