Ghastly Sound, 'Have a Nice Day' 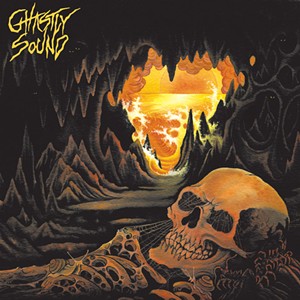 After several listens through the latest Ghastly Sound project, Have a Nice Day, I'm almost beginning to wonder if the album title was intended sarcastically. You can never tell with these heavy metal types, a secretive subculture of "doom sludge" and "mosh pits" and "djent riffs." And sweet, sweet cover art with skulls.

In a world of a million aspiring metal bands, though, you need something different to stand out. Ghastly Sound have a pretty good angle: They are a crushing wall of sound, churning out creative and adventurous work — and they are a trio with no guitarist. Just bass, drums and some operatically unhinged lead vocals.

Obviously, that puts the heavy lifting squarely on the shoulders of bassist TJ Maynard and drummer Ryan Lewis. Good news: They are both powerhouse players, equal to the task. Song after song, the duo delivers lush, huge backdrops for vocalist Tyler Gurwicz. Maynard's riffs make the most of his instrument's melodic reach, veering from lead lines to low-end squalls, often in the same heartbeat.

Have a Nice Day marks the first full-length album from Ghastly Sound, who churned out two EPs in 2017, both highly polished and mature projects in their own right. Then the band went ominously quiet in 2018, dropping only a single, "Crippler Crossface."

Still, that was more than enough to attract some national attention, earning the band rave reviews on genre blogs and an appearance at the prestigious Psycho Las Vegas festival. (The band also played the lower-profile, but wonderfully named, New England Stoner and Doom Fest in Jewett City, Conn.)

Rather than rest on their laurels, Ghastly Sound up the ante across the board on the new album. The songwriting is still a primal howl, but Gurwicz is in total control of his pipes, and the album is full of personal reflections and politicized metaphors. The riffs are also tighter than ever — and catchier, too.

The album marks a huge progression for the band's overall production and sound, as well. Its earlier work, much of it produced by Ryan Cohen at Robot Dog Studio in Williston, sounds clean and strong. But here the band partners with engineer Dave Parker, known for his boundary-pushing work with prog-rock outfit Coheed and Cambria. It's also mastered by Grammy Award winner Alan Douches.

The result, no surprise, is Ghastly Sound's best-sounding release to date. Have a Nice Day represents a strong regional act making the right moves to reach the next level. To say this music is not for everyone is more of a joke than an understatement, but for genre faithful, this is top-shelf stuff. The band has monster riffs and killer chops, and Gurwicz has the right mix of charisma and insanity to really turn some heads.

Have a Nice Day by Ghastly Sound is available at ghastlysound.bandcamp.com.

Correction: September 26, 2019: An earlier version of this story misstated the producer of the band's earlier work. It was Ryan Cohen.

Speaking of Ghastly Sound, Have A Nice Day