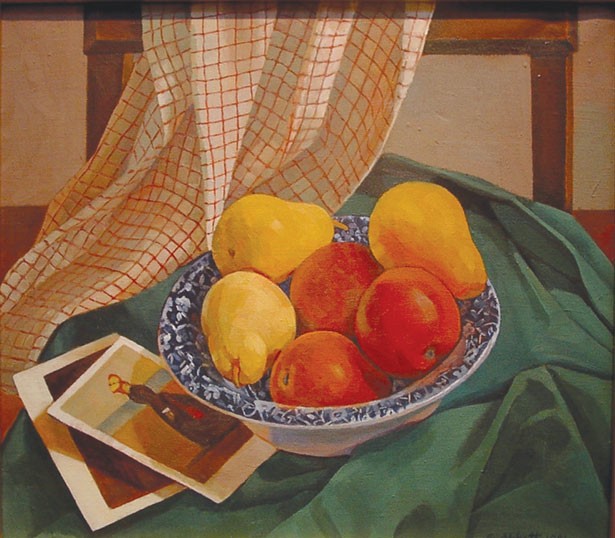 In his Naturalis Historia, Roman writer Pliny the Elder (A.D. 23-79) retold an ancient Greek story about a competition between two still-life painters: Zeuxis and Parrhasius. Zeuxis' still life was so realistic that birds swooped down to try to eat his succulent grapes. When it was Parrhasius' turn to unveil his painting, he gave Zeuxis the honor of removing the cloth that covered it. The amazed Zeuxis exclaimed on touching the painting: "I have deceived the birds, but Parrhasius has deceived Zeuxis." Parrhasius' draped "cloth" was his perfectly rendered illusion.

The exhibition "Objects of Desire: Still Life Paintings" at the Bryan Memorial Gallery in Jeffersonville is full of pictures that might trick Zeuxis. A dozen or so Vermont painters contributed more than 125 still lifes, ranging from the realistic to the hyper-realistic.

Susan Abbott is probably best known for watercolors depicting items one might gather in a day's outing - flowers, cards, fruit, envelopes - such as are captured in her 30-by-41-inch piece "In Search of Piero." Abbott's "Apples, Pears, Postcards" is a 15-by-17-inch oil with three pears and three apples in a bowl beside a couple of postcards. Though this work is much simpler, it looks more substantial, no doubt because of the medium: Abbott's subtle handling of oil paint renders light with greater authority. Tactile variations, such as the green tablecloth and patterned drapery falling gently behind the bowl, are more adroitly described.

One of the most precise painters in the show is Julie Y. Baker Albright. Her 16-by-12-inch oil "June's Peonies" is a sparse composition portraying puffy white and burgundy flowers in a glass vase on a smooth, white tablecloth. Pale- to dark-gray values modulate horizontally across the empty background. Albright's 8-by-16-inch "Golden Leaves" has the same proportions but more rounded forms. Two brown-and-gray pots hold twigs with curled brown leaves, and the artist's subdued chromatic harmony is made up entirely of earth tones. Like a 17th-century Dutch still life, it's an acutely naturalistic work and, given its dead leaves, may be referencing the Baroque theme of vanitas - a subtle nod to mortality.

Albright's "Last Bouquet" is a 12-by-24-inch vertical oil featuring a bouquet of mixed wildflowers in a tall, dark-blue vase. Though the flowers are ostensibly the main subject in this work, a white highlight emblazoned down the vase with one supremely confident brushstroke completely steals the limelight.

Wisconsin artist Jody dePew McLean is as masterful with pastels as Albright is with oils. McLean saturates her scenes with a broad array of hues that dance over vessels with reflections and expressive patterning. "Tarnished Silver" is an 11-by-14-inch piece in which reflections are distorted by the curved surfaces of a silver pitcher, a red jar, a white vase and a small blue-and-white bowl. Colors accent the lustrous objects like small bursts of fireworks. "Yellow Chinese Jar" is less atmospheric: The 11-by-14-inch pastel features the silver pitcher from "Tarnished Silver" and a blue-and-yellow jar. The still-life elements sit on a red-patterned textile that provides a respite from McLean's usual high-gloss surfaces.

The eruption of Mount Vesuvius on August 24, 79 A.D., buried and preserved many frescos at Pompeii, giving us the finest surviving still lifes of antiquity. Its gases also killed Pliny the Elder. But his writings about art endure, reminding us, along with the Pompeian finds, that the still life has deep roots in Western culture. "Objects of Desire" at Bryan Memorial Gallery amply demonstrates that the realistic genre continues to fascinate both artists and viewers.