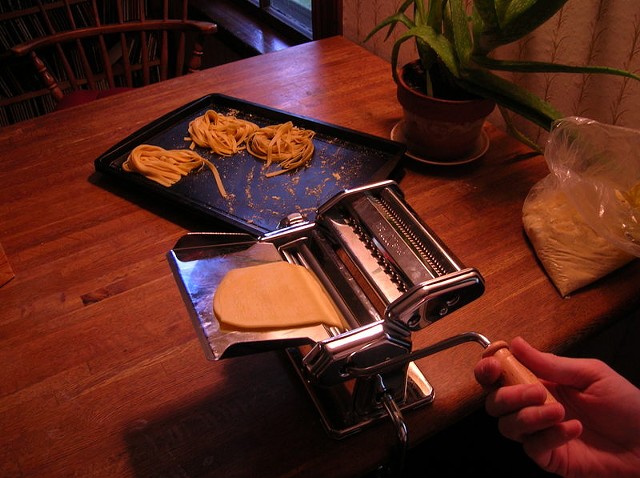 The potluck was fun. About 15 people came over and brought a bunch of different dishes that added up to a well-balanced meal. When I got home, Gahlord was already making pasta, cranking out egg linguine. When we cooked it later, though, it kept sticking to itself, and it ended up kind of like dumplings. G. says he'll try adding more flour next time.

The carrot cupcakes turned out OK. I substituted 1/2 c. of honey and a bit of baking soda for each cup of sugar, and used about 3 T less olive oil to make up for the added liquid. The batter looked really gooey when I poured it into muffin tins, so I was sure they'd end up  all over the oven, but everything worked fine, and they actually turned out far lighter than I'd expected. I frosted them with cream cheese from Champlain Valley Creamery, mixed with maple syrup and some dried ginger. Of course, I forgot to take any pictures of either the batter or the finished cakelets. They got eaten pretty quickly.

Other stuff I cooked: a slow-oven bean bake, this time with potatoes, onions and curry, and a cabbage/carrot slaw that also contained grated onion, garlic and apple, dressed with salt and cider vinegar. My new favorite drink, of which I mixed up several glasses last night, is a combo of water, cider and blueberry vinegar. Sounds weird, I know, but it tastes like lemonade. Besides cider and maple-flavored milk, other drinks included a jug of wine made by a friend's coworker, a bottle of Big Barn Red from Boyden Valley Winery in Cambridge, and some Egyptian-style blueberry-honey mead my friend Mandy made. (Check out her step-by-step photos!) The mead was good, if a bit fizzy, and definitely tasted of honey. Non-localvores and those of us making the "Drunken Marco Polo" exception also drank beer. In the middle of a conversation, I absentmindedly opened a beer and almost sipped it before Gahlord stopped me. I thanked him later.

Other dishes people brought: tomatoes layered with mozzarella and basil, local chevre to spread on bread, a tomato salad, and watermelon. There was also rice, quesadillas and tortillas for folks not doing the challenge.

I think I want to make ice cream this weekend. Further bulletins as events warrant.