Getting Existential and Philosophical with José González 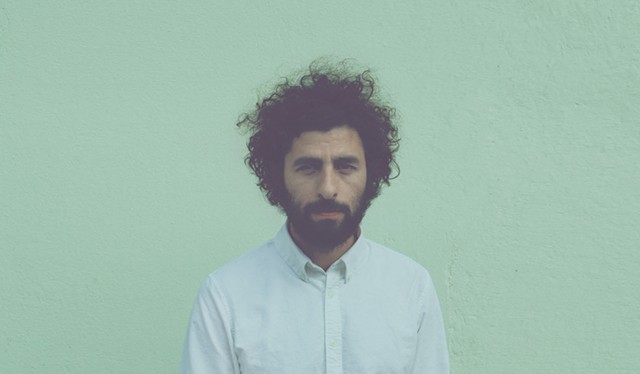 "What will be our legacy?" singer-songwriter José González asks the listener in the opening line of "What Will." The centerpiece of his 2015 album, Vestiges & Claws, continues: "Lazy acceptance of the norm? / Silent acceptance of the form?" It's a question that's surely been on many people's minds lately.

The Swedish musician with Argentinian roots regularly sprinkles his heart-wrenching poetry with existential musings and philosophical exploration. An academic at heart, the former PhD student left his studies to pursue music in the mid-2000s and first made waves with his acoustic cover of fellow countrymen the Knife's latent electro-pop hit "Heartbeats."

González performs on Tuesday, February 6, at the Hopkins Center for the Arts at Dartmouth College in Hanover, N.H., with support from singer-songwriter Bedouine.

Seven Days caught up with González by phone.

SEVEN DAYS: Your music has been described as the kind that "asks big questions." What have you been pondering lately?

JOSÉ GONZÁLEZ: I'm a curious person in the sense that I like to think about some questions on my own, and I listen to experts in the field — philosophers or scientists. I think of the three big questions: the existence of the cosmos, the beginning of life on Earth and how consciousness started. I think consciousness is the tough one.

JG: Yeah, I do. It hasn't always been like that. I've been training with meditation and reading about meditation. Many meditation techniques have to do with metacognition — thinking about thinking. There are also philosophers like Daniel Dennett, who try to help you think about thinking by providing thinking tools.

JG: Remembering stuff. My memory used to be better. I'm actually very conscious of how bad my memory is. That's one of the reasons why I started running once in a while, because it's one of the best ways to improve your memory and to make you a better thinker.

SD: You mixed your last record, Vestiges & Claws, which was a first for you. Did that open up any new creative doors?

JG: Speaking of things I'm not good at, I'm gonna leave [mixing] to someone else and not spend hours and hours listening to different frequencies. I feel like other people are better at it. I'm gonna try to focus on my guitar skills and poetry.

I do feel like I managed to do interesting stuff with [my 2014] Arthur Russell cover, "This Is How We Walk on the Moon." I was producing and doing beats. It's been fun to [wear] my producer hat.

SD: When you were writing songs for The Secret Life of Walter Mitty, how much guidance were you given? Did you get to watch the film beforehand?

JG: At first, I didn't get to see anything. I was writing with only a script and some guidance — which was actually fun because they were telling me about certain BPMs that would be good. So I just stumbled in the dark and they would just tell me things I could do.

Later, of course, I watched the movie with Ben [Stiller] and [composer] Theodore Shapiro. I went to LA and New York to work with them. The two main songs ended up being written by [Shapiro] and Ryan Adams.

SD: Are there any directors whose work you love and would like to write music for?

JG: Not really. It's not something I think too much about. I'll just write my own music and see if it gets picked out for a TV series here and there.

SD: Your cover selection has always been primo. Do you have any interesting ones you're working on?

JG: I've sort of steered away from trying to do unexpected covers. With Junip, we decided not to do any. Lately I've been doing "Blackbird" by the Beatles. It's not so much me trying to do something unexpected. It's more about just playing something that people recognize.

SD: I'm sure that's a crowd-pleaser.

JG: I don't see anything wrong with ["Blackbird"]. It's perfect in many ways.

SD: Speaking of Junip, any update on that project?

JG: Not really. This year will be dedicated to solo and orchestra.

SD: You're performing with an orchestra?

JG: Yes. They're called the String Theory Orchestra, from Berlin and Göteborg. We did some live recordings that we're putting out on double LP — old music, but these amazing arrangements.

SD: That does sound amazing. Does it have a release date?

JG: No. We're mastering and putting together the artwork.

SD: What's a song that you love to sing in private but would never perform?

SD: That is really funny.

JG: It's made for karaoke when it's only a couple of friends [with you].

SD: I understand that you used to be in a hardcore band before you went solo. Do you ever feel like going back to heavy music?

JG: Not really. I feel like, if I did that, I would be trying to prove something to someone. There are so many genres that would be fun to do, and hardcore is only one of hundreds.

SD: In 2016, an interviewer with the University of Warwick asked if you were involved in any organizations. You said no, but that you were interested in "how to create a better world." Any progress there?

JG: Yeah, definitely. I'm not sure if you've heard about the effective altruism movement. About 10 years ago, I got interested in economics and cost-benefit analysis. There was a TED Talk by Bjorn Lomborg, an economist who does cost-benefit analysis of different policies in areas that are the main problems for people.

Since then, there's this movement that got bigger and bigger through some young PhDs and professors at Oxford — I've been slightly involved with them, actually. [I've donated] money to the most effective charities and read through all the stuff they produce in terms of research of existential risks and how to mitigate those.

SD: Did you discover any mind-blowing concepts?

JG: There's so much being done in that field. One thing that opened my eyes in an unexpected way was Nick Bostrom, a guy that wrote a book called Superintelligence. He ranked artificial intelligence as one of the main [risks] we should be careful with. It's taken, like, three years to make it sink in, and I'm super concerned because there are too many question marks. It's one of those issues I wasn't really taking seriously at first.

The original print version of this article was headlined "Think Tank"