Get Your Scream On 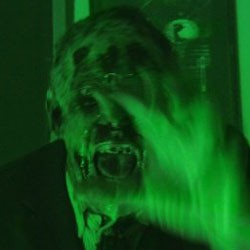 As always, Halloween brings us Hollywood horror. But if you don’t get happy chills at the mention of Saw 3D (or, for those counting, Saw VII), the ongoing Vermont International Film Festival has some alternatives. Will Peters, who organized last year’s horror film fest at Outer Space Café, has teamed up with VTIFF this year to bring three indie movies to the Palace 9 Cinemas on Halloween eve.

“I wanted to get three feature-length films which represented a few different ‘subgenres’ of horror,” Peters says. Golden Earrings, from Californian actress-writer-director Marion Kerr, is a Hitchcock-style suspense film about a young woman’s obsession with her roommate. Sparrow is a slasher film in which a bunch of young people take an ill-fated camping trip to a historic murder site, filmed in Poland with an English cast.

Less easy to classify is the third movie, Walking Distance, which sounds like a blend of small-town psychological horror and apocalyptic zombie business. Scream queen Adrienne King (Friday the 13th) has a role, as does (briefly) Paranormal Activity’s Katie Featherston. Peters says he expects an appearance from the movie’s Texas-based director, Mel House, who’s been praised as a “creative voice” on Fearnet.

For a homegrown horror experience, search for “smog horror” on YouTube (or follow the link from the site of DeadFi Productions, www.deadfi.blogspot.com). Owen Mulligan, who showed his short “Midnight Roadkill” at the Horrorfest last year, is back with “The Smog,” a 9-and-a-half-minute chiller starring Antenna Wilde, Matt Sutkoski, Daye Matthew and the voice of WCAX’s Bianca Slota. She’s the newscaster introducing a scenario in which creepy green smog has engulfed the area and turned most people into zombie-like “Smoggies.” One young man hides in his apartment with the windows duct-taped, drinking through his beer stash ... but can he hide for long?

Basic in plot but smoothly executed, “The Smog” was nominated for best sound design at the Killer Film Festival in Foxboro, Mass. It has effective gross-out effects, as evidenced by admiring YouTube comments about the “head-smashing effect” and the “slime look.” So if you have a strong stomach, check out the work of some of our local fake-gore aficionados.