Is it time for Burlington to finally regulate animal husbandry? 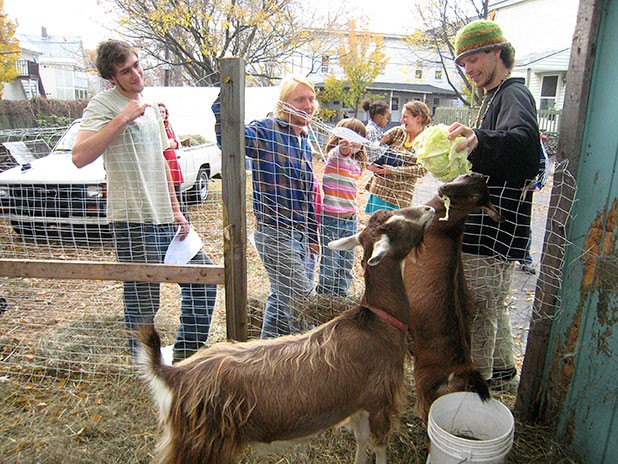 David Ferrell’s “studies” have a way of getting him in trouble. The 21-year-old University of Vermont agriculture student keeps three chickens and two goats in the yard of his Decatur Street home, in the Old North End.

Fresh eggs and milk aside, Ferrell’s animals are a real-life application of his undergraduate studies and a potential business opportunity: He wants to market the goats as agents of “sustainable lawn care.”

Last month, at the urging of a Burlington animal control officer, Ferrell — a skinny guy with a light beard — had to give away his chickens. He was also ordered to get rid of his goats. Last Friday, while the animals munched hay, Ferrell said he considered ignoring the order but has decided to send them to a farm.

“Animal control is forcing us to get rid of the goats,” Ferrell said. “They said that it’s against the zoning code, but it’s weird, you know? With the financial crisis, everybody’s looking to be self-reliant and sustainable, and here we have these laws that are, like, kind of prohibiting that.”

Ferrell’s dilemma illustrates a legal conundrum for Burlington residents raising livestock within city limits. Burlington has no specific statute regulating animal husbandry, and city officials can’t seem to agree on where, or under what circumstances, livestock may be raised in the Queen City.

While she declined to comment on Ferrell’s case, Burlington Animal Control Officer Jodi Harvey told Seven Days that there has been no “formal poll” of farm animals living in Burlington. Likewise, there is no real legal precedent for regulating farm animals in the city — although Harvey recalls that some goats, pheasants and pigs were once removed from a Burlington property that was used as a “rescue” operation for farm animals.

Jane Woodhouse, president of the Vermont Sheep and Goat Association, says she has never heard of Vermont goatherds raising “red flags” with public officials. Then again, this is the first time Woodhouse has heard of anyone raising goats in Vermont’s largest municipality. “I suppose any town can pass an ordinance against it,” Woodhouse said, “but it doesn’t tend to be a problem because we’re such a rural state.”

Harvey said that, under state law, chickens and other farm animals are considered “domestic animals,” not pets, and are therefore banned in residential areas and other parts of the city that are zoned for nonagricultural uses.

However, Article 13 of Burlington’s zoning ordinance seems to allow some keeping of “domestic animals” in the city. Article 13 allows residents to keep four or fewer “mammals, reptiles, birds, livestock and domestic pets” for personal enjoyment.

City Attorney Ken Schatz couldn’t say what the rules are for raising livestock within the city limits. Both Harvey and Schatz, who noted that he has never prosecuted an urban-livestock case, referred questions to the Department of Planning and Zoning. Ken Lerner, the city’s zoning administrator, did not return multiple phone calls and emails seeking clarification of the city’s ordinances.

A call to Kathleen Butler, director of code enforcement for the city, further complicated the issue.

Butler said Burlington residents occasionally call her office with chicken-related complaints. She said that, while it’s illegal to start a chicken farm on land that isn’t zoned for agriculture, it is legal to raise chickens provided the operation conforms to the city’s definition of “accessory use.”

According to Butler, the same principle applies to chickens and, she guessed, goats — within reason. When a backyard livestock operation begins to look or smell like a farm, disgruntled neighbors could claim it violates ordinances designed to regulate “nuisance” and “exotic” animals.

Still, Butler said, “Up until now, the city ordinances haven’t really regulated this issue too much.”

That could change. Butler and David White, the director of planning for the city, have asked the Burlington Planning Commission to consider drafting new ordinances on animal husbandry.

Other Vermont cities have already attempted to clarify their regulations on animal husbandry within city limits. In Rutland, Vermont’s second-largest burg, a public-health ordinance prohibits pigs, cattle, horses and “fowls” from living within 100 feet of a building or street. In Montpelier, the capital city’s Code of Ordinances prohibits “domestic fowl, goat, sheep, swine, horse or cattle” from roaming “at large, loose or unrestricted” within city limits. In other words, you can keep as many barnyard animals as you like, provided they’re confined.

Butler has heard from Burlington residents on both sides of the animal-husbandry fence. Some think all livestock should be banned from town, she reported, while others, like David Ferrell, insist that animal husbandry is a logical extension of the state’s sustainable-ag ethos and a sensible way to reduce our collective dependency on fossil fuel.

Until his goats ship out, Ferrell and his housemate, Forest Donaj-Keys, plan to keep trading goat’s milk and kefir for local vegetables and honey. And the local kids will continue to stop by and play.

The scene at Ferrell’s place last Friday looked like a mini petting zoo. Kids from Children’s Space, an early care and childhood education program, had come for a visit.

“Hey, there’s hay in the water!” one child said, as one of Ferrell’s Decatur Street neighbors fed the goats a head of cabbage.

“They definitely spend a lot of time visiting the goats,” said Heather Duhamel, program director at the Children’s Space. Her colleague Jackie Reno, whose mother raises mini horses in the New North End, added that the children would be sad to see the goats go.

After the kids left, Ferrell milked the goats while Donaj-Keys, a red-bearded environmental studies major with shoulder-length blond hair, explained the pedagogical benefits of goat herding. Donaj-Keys is writing his thesis on “guerrilla gardening;” while this goat-raising project isn’t directly related, he said the experience will inform his studies in a general sense.

As Ferrell returned with a pail of fresh goat’s milk, he recalled how a Montpelier family gave him the goats after he contacted them via Craigslist. Donaj-Keys said, “We just put the camper shell on the back of his pickup” in order to haul the animals back to Burlington.

The young men strolled into a nearby greenhouse, built a few months ago without a permit, where Ferrell is growing kale and spinach. The goats were lying down outside.

“It’s all about community,” Ferrell said after inspecting his greens. “This is, like, the new push for sustainable agriculture."