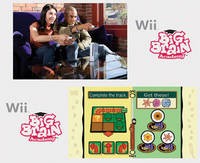 Don’t get a big head.

With a little effort, though, you might increase your brain size. That’s the promise if you spend some time working through the mind-benders included in “Big Brain Academy: Wii Degree” for the Nintendo Wii.

Scientifically speaking, “BBA” may not actually swell the gray matter inside your skull. Still, for purposes of living-room amusement, the game does track your progress in quickly solving various analytical, computational and visual problems with a graphic representing an ever-growing lump of brains. Solve a series of consecutive puzzles correctly and quickly, and you add grams to your brain score. Mess up, and your brain shrivels as it sheds pounds.

The original brain-building games for the Nintendo DS provided a surprisingly popular diversion. Freed from the narrative context of killing things and saving things, players enjoyed the pseudo-scientific pleasures of solving puzzles and muscling up their minds. “Brain Age” tossed math problems and pattern-matching activities at players, then rated their performance as an actual age of the player’s mind. “Big Brain” went goofier, introducing a smarty-pants worm in a mortarboard hat who encouraged your academic performance while presenting you with slightly more amusing versions of the interactions from “Brain Age.”

The new Wii version might as well be titled “Laser Pointer Fun.” Even though the game offers plenty of new activities, the Wii motion-sensing controller doesn’t serve much purpose other than being a handy device for aiming at things on the screen. Need to indicate which numbers add up to 27? Use the Wii remote to point at them. Trying to identify what’s depicted in an image slowly resolving on the screen? Point at the correct animal name and press the button.

The simple, point-and-click play promises fun while proving that people enjoy pointing almost as much as they enjoy laughing. Perhaps it’s the perennial desire to prove that we’re quantitatively smarter than the other guy. Or maybe it’s the gambler’s compulsion: Small rewards keep you playing.

No wonder the game’s at its best in multiplayer mode, offering both head-to-head and cooperative options. Using two controllers, up to eight players can face off in groups of teams in a race to solve the cerebral work-outs the game shoots out in rapid succession.

Nintendo fans weaned on “Metroid,” or even “Mario,” will find that games such as “BBA” are hastening the company’s march away from the hardcore fans and toward the hard-of-hearing set. Sure, this might rankle “Zelda” fans used to spending hours just learning to play a game. For the rest of the world, though, earning a Wii degree provides all the video game they can handle. Once again, Nintendo delivers entertainment that doesn’t disappoint.

Who's It For: Once you are old enough to read, you're old enough to enjoy "Big Brain Academy: Wii Degree." The game assembles activities simple enough to pick up after a few minutes, and challenging enough to train your brain on a daily basis.

If You Like This, Try That: The Wii has no shortage of mini-game collections. "Wario Ware: Smooth Moves" never fails to please, while "Wii Sports" and "Wii Play" provide slightly more active versions of video-game fun.

Best Part: Sharing your "Academy" progress with friends over the Wii's Internet connection gives you the charge of having big-headed competitions with pals all over the world.