Get Psyched for Summer With These Camp-Themed Reads 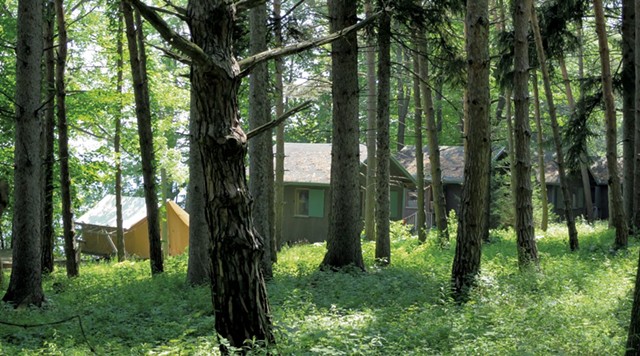 It's February, and that puts us smack-dab in the middle of winter. We eat breakfast in the dark, walk the dog in the dark, eat dinner in the dark, burrow into bed, then do it all over again. It's hunker down, layer up, shovel the walk, wipe your nose and watch your step season. With temps in the teens and August six months away, summer camp is a hazy mirage.

Do we really go outside in bare feet? Swelter in wooden bunks packed six to a cabin and listen to loons call across the lake at night? Though you have to wait to actually go to camp, we know how to get you there now. Pick up Lions & Liars by Kate Beasley and tag along with 10-year-old Frederick as he finds himself at Camp Omigoshee, sharing a cabin with Nosebleed, Ant Bite, Specs and the Professor. Or get lost in Hope Larson's graphic novel Chiggers and root for Abby as she goes back to the same camp she's gone to for years but finds everything different.

These are among books recommended by Vermont booksellers and librarians.

Dive in and be transported. You'll be swatting at mosquitos, hearing a crackling campfire and plopping a droopy, toasted marshmallow onto a graham cracker just before it falls from the stick. After all, books are the original virtual reality, so read on. Oh — and check the corner of your mouth. No, the other one. You've got a little chocolate smeared — riiight ... there.

Away by Emil Sher, illustrated by Qin Leng

"This lovely picture book talks about some of the fears associated with going away to camp," said Christy Richardson, a bookseller at Phoenix Books in Burlington. And it's told entirely through the sticky notes that Skip and her mom leave for each other as camp approaches. "I'm not going. Not EVER!" Skip writes early in the book. But, said Richardson, "it all ends up being a super fun adventure." Ages 4 to 8.

A Couple of Boys Have the Best Week Ever, written and illustrated by Marla Frazee

James and Eamon go to nature day camp and spend nights on a blow-up mattress at Eamon's grandparents' house in this wry, even-fun-for-parents, Caldecott Honor-winning book recommended by Richardson. "My son, Jasper, went to Camp Abnaki for the first time this past summer, and we read A Couple of Boys Have the Best Week Ever to show him what to expect and get him pumped up about the experience," she said. "He absolutely loved his time there." Ages 6 to 9.

Be Prepared by Vera Brosgol

Librarian George was one of three people to recommend this book, calling it "a relatable and funny graphic novel dealing with the hardships of making friends at camp." Kirkus Reviews offered this introduction: "Convinced that she will never fit in with the American girls in her class because her family is 'too poor,' 'too Russian,' and 'too different,' 9-year-old Vera jumps at the opportunity to attend Russian summer camp ... However, Russian camp in the Connecticut woods is not at all what she had expected..." Ages 8 to 14.

Kirkus Reviews called this book a modern makeover of The Parent Trap. Richardson said it's "about two 12-year-old girls whose dads fall in love and are sent away against their will to summer camp in hopes that they will become besties. All of them end up on a very unpredictable summer adventure!" Ages 10 to 13.

Frederick is suddenly popular, thanks to a case of mistaken identity in this chapter book recommended by Jane Knight, children's buyer at Montpelier's Bear Pond Books. Lions & Liars, she said, "is a super funny identity-swapping caper that speaks to finding your true self." Ages 8 to 11. 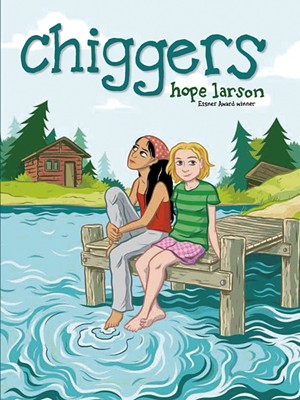 Magical realism mingles with summer camp rituals in this graphic novel for tweens that Richardson calls "a classic coming-of-age story." Tucked between the black-and-white drawings are surprise lessons, including directions for a card game and illustrated instructions for making a friendship bracelet. Ages 10 to 14.

Hiata Corduan, owner of Bridgeside Books in Waterbury, recommends this graphic novel about best friends Olive and Willow, who share a cabin at Acorn Lake. But Willow finds it hard to adjust to camp and clings to Olive, which strains the girls' friendship. Ages 8 to 12.

Gabe is excited to spend six weeks at the Summer Center for Gifted Enrichment, but he worries what his new stepbrother, the supercool Zack, will think about him. After all, SCGE can also stand for Smart Camp for Geeks and Eggheads. Ages 9 to 12.

Summer According to Humphrey by Betty G. Birney

Birney has written a series about the hamster who lives in Room 26, Mrs. Brisbane's classroom. "Where does the class pet go when school is out? Summer camp, of course!" said librarian George, who recommends the book. Ages 8 to 12.

The Summer Camp Survival Guide: Cool Games, Camp Classics and How to Capture the Flag by Chris Pallatto and Ron DeFazio, illustrated by Ethan Long

George recommends this guide for kids who are worried or anxious about going to camp. Bonus: The book includes tear-out postcards, as well as pages to collect addresses and autographs. Ages 7 to 12.

Fed up with his family, the tiny protagonist hits the road and heads to Happy Acres Camp in this classic that George called a "great read-aloud from The Mouse and the Motorcycle series." Ages 8 to 12.

Dorothy Alling Memorial Library student assistant Adam Zuchowski recommended this one, a follow-up to Gibbs' Spy School. Middle schooler Ben Ripley has his sights set on a career in the CIA and spends his summer at a rustic wilderness camp that's been infiltrated by an enemy spy organization. Ages 8 to 12.

In this graphic memoir set at an all-girls camp, Thrash recounts the summer of her first love.

"It's funny, devastating, relatable and honest," Phoenix Books' Richardson said. Ages 13 and up.

Librarian George likes this "young adult take on summer camps complete with crushes and drama." Ages 12 and up.