Get Out!: Baby's First Camping Trip 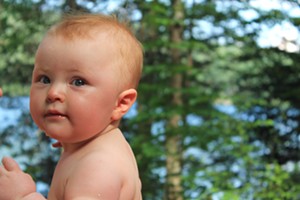 My partner, Tristan, and I have been excited to take our daughter, Elise, camping since she was born. Sharing our passion for nature and exploration has long been part of our vision for family life.

We waited until Elise was 8 months old for her first camping trip. I was nervous that she wouldn't like it or would be scared to sleep in a tent, but —despite some interrupted sleep — our first foray into camping was a success, and we learned a few lessons along the way.

We took advantage of a free, mid-week afternoon with nice weather to pack up and head to nearby Groton State Forest, about 10 miles from our house. There are five beautiful state parks that offer camping there. We chose to stay at Ricker Pond State Park, at a campsite right on the water.

Setting up camp with a baby was a new experience. We awkwardly juggled all of our responsibilities: keeping Elise safely occupied, changing a very messy diaper, setting up the tent, rolling out the sleeping bags and getting dinner going. Eventually, we sat down to an early meal of sandwiches, chips and lemonade while Elise chowed on spoonfuls of mashed fruit and cereal.

After dinner, we took a hike, with Elise in the hiking carrier and our dog, Odin, trotting along beside us. We walked up the camp road to the Cross Vermont Trail and, after a short distance, turned onto an unmarked side trail. We meandered along a stream through mixed deciduous and conifer forests. After about a mile we came to a granite outcropping that sloped down to another bigger and very beautiful stream with deep, bubbling pools of water.

We spent some time sitting on the rocks overlooking the stream, pointing out ducks to Elise and watching Odin paddle around. The sun was setting over the lake upstream and we could see glimmers of the warm colors through an opening in the trees. Not wanting to be caught in the dark, we hoisted Elise back into the carrier, called Odin out of the water and hiked back to camp. On our way back, we enjoyed some blueberries we found along the trail.

Back at camp, we had the daunting task of putting Elise to bed in an unfamiliar spot. She was starting to show signs of fussiness, so I put her in the tent to play with some toys, unwind and get comfortable in this new setting. After a little while I laid down with her to read a story and nurse her but, even after both of those things, she was still squirming around. So I played some quiet music on my phone and rubbed her back until she fell asleep.

Once Elise was down, I joined Tristan by the fire he had started. We each drank a cold beer and made some S'mores. We listened as loons called across the lake and an animal we couldn't see fished along the shore below our campsite. Odin fell asleep next to us by the fire. Eventually we joined Elise in the tent and settled in for the night.

Unfortunately, I didn't sleep very well because I was listening for Elise to wake up — which she did five times. Each time she fussed a bit and I soothed her back to sleep. At first, I was worried about waking other campers from neighboring sites. But when I heard the cries of a toddler we met earlier just a few campsites down, it put a little smile on my face. Another mother and baby were learning to camp together, too.

We woke up in the morning around 7 a.m., packed up and headed back to our house for breakfast and coffee. On the car ride home, we were already making plans for our next camping excursion.

This trip was a good first effort, but we had some snafus and learned a few things that will help us next time around. Thinking of taking your baby camping? Here are some tips that might come in handy: