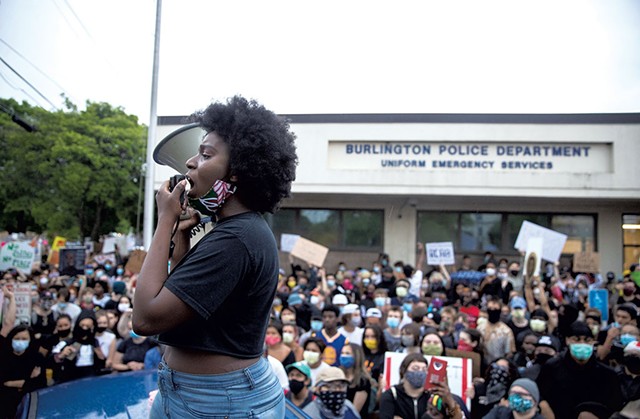 As the crowd swelled and pulsed on Saturday night, the authorities were waiting in the wings. Officers with the Burlington Police Department stood by a heavy-duty emergency response truck in a gravel parking lot on North Avenue. The Vermont State Police stationed a tactical team at the nearby fire station, where another tactical truck held impact rounds, irritant gas and riot shields.

But the police had no need for the specialized equipment.

Well more than 1,000 people, led by members of Vermont's communities of color, converged in Battery Park to join the raucous, outraged demonstrations that have swept the country since George Floyd, a black man, died at the hands of Minneapolis police during a May 25 arrest.

A day before the Burlington protest, Derek Chauvin, the Minneapolis officer who planted his knee into Floyd's neck for more than eight minutes, had been charged with third-degree murder. His arrest did little to quell the public anger. Those marching in the streets wanted wholesale reform.

"Is my son next?" one Burlington protester's sign read. "White Americans are the biggest threat to America," read another. "Stop giving bigots badges," demanded a third.

The placards would be left in piles around 1 North Avenue and on the windshields of parked police cruisers, but only after protest leaders confronted local cops directly.

Hundreds chanted for interim Police Chief Jennifer Morrison to come outside. She and Deputy Chief Jon Murad obliged, then looked up and listened to protest leader Harmony Edosomwan, who stood in the bed of a pickup truck.

"Are you familiar with the person Jason Bellavance?" Edosomwan asked through a megaphone, referring to a Burlington police sergeant who was disciplined for using excessive force in 2018. The incident, which involved Bellavance pushing a black man into a wall, knocking him unconscious, was captured on video. It's currently at the center of an ongoing federal civil rights lawsuit against the city.

Edosomwan also asked about Officer Cory Campbell, who punched a white man during an altercation outside a hospital last year. Douglas Kilburn died days later. Campbell was disciplined for using profanity during the interaction, but police defended his use of force.

Edosomwan and the jeering crowd brushed aside Morrison's attempts to respond.

Then the protest leader, a prominent student activist at the University of Vermont, held up a clear gallon jug filled with red liquid. She dumped it onto the pavement at the feet of the police leaders.

"Their blood is on your hands," Edosomwan said, referring to people killed by cops.

And if police kill — or assault — another person in Burlington, Edosomwan warned, protesters would return to burn the police station down.

By the time the crowd peacefully dispersed, a Black Lives Matter flag flew atop the police station; the building's walls were tagged with graffiti. The minor vandalism may have been more widespread if not for a black organizer who chastised a spray-paint-wielding white man.

"Do not touch this building!" she yelled, according to a Vermont Public Radio reporter who witnessed the scene. "You will give them a reason to hit us black people. They will not see you."

The intense, widespread activism quickly caught the attention of state officials, who issued rare, direct condemnations of the Minneapolis officers.

"The public needs to know we stand with them," Capt. Garry Scott, the Vermont State Police director of fair and impartial policing, said in a statement last Friday.

The topic consumed much of Gov. Phil Scott's Monday press conference, briefings that for months have been dedicated to the state's coronavirus response. The governor called for prosecutors to charge the three officers who watched Chauvin pin Floyd's neck to the pavement, as well.

"My heart goes out to all people of color across the nation who, even though they live in different communities, carry this trauma every time something like this happens," he said.

"In the greatest country in the world, no one should stand for this," Scott continued. "No one should make excuses for this. And no one should ignore this. We must all make clear: Enough is enough."

He also announced that Xusana Davis, the state's executive director of racial equity, would chair a new task force to tackle systemic racism. The group, Scott said, would "evaluate structures of support for racially diverse populations," review state laws around hate speech and study ways to encourage more people of color to run for public office.

Smaller but sizable protests have taken place in Rutland, Brattleboro, Montpelier, Derby Line and St. Albans. In the latter city, a couple hundred people on Tuesday chanted "Police the police," and "Black lives matter" in a downtown park, videos from the event show.

People of color have been prodding Vermont institutions to act for years. In 2016, students at UVM raised a Black Lives Matter flag on campus, but it was swiftly stolen by a white fraternity pledge. In 2018, former state representative Kiah Morris of Bennington resigned her seat after white supremacists harassed her online. Last year, when video emerged of Bellavance injuring Jérémie Meli, Black Lives Matter activists demanded that the City of Burlington fire Bellavance and two other officers who had been on the scene. An online petition they created at the time has circulated again in recent days and now has 36,000 signatures.

Last year's galvanizing incidents in Burlington resulted in the formation of a special committee on policing, which proposed several revisions to the police department's use-of-force policy in February.

On Monday, Chief Morrison fast-tracked two of the proposed changes by issuing a departmental order that made them effective immediately. Under the new rules, officers must intervene any time they witness misconduct or excessive force by a fellow officer, and they must prioritize de-escalation whenever feasible.

"Right now, the community needs to know that we are doing everything possible to prevent anything like what we saw in Minneapolis from happening here," the chief said during a briefing with the mayor.

Later that day, Burlington city councilors passed a resolution condemning racism, police brutality and Floyd's death. But even that simple gesture proved controversial and required a protracted debate about whether the resolution should include a line thanking Burlington cops for their "non-confrontational and professional response" during the protest on Saturday.

Less controversially, the resolution called upon the city to raise the Black Lives Matter flag outside of city hall for the remainder of the COVID-19 state of emergency.

Officials already had such a flag on hand. Morrison said police removed one that belonged to protesters from the station on Sunday morning and replaced it with an American flag. She said she asked organizers whether they wanted it back but "received no reply."

Instead, she gave the flag to the city parks department. For now, it's flying over Church Street.