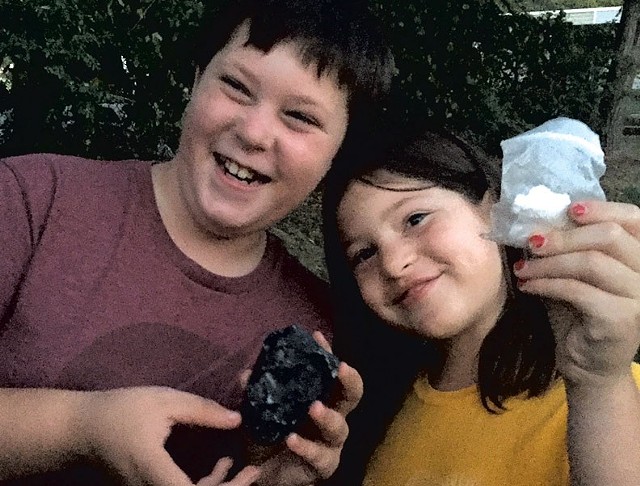 My kids won't join me for a walk, but if I mention that it involves my smartphone, they'll race me to the door. I discovered as much this summer during the Pokémon GO craze, when we wandered the neighborhood with my phone, looking for virtual critters. Once that fad faded, I turned to a different tech treasure hunt: geocaching.

Unlike a Pokémon, a geocache is a real item — it could be as small as a film canister or as large as an ammunition box — that might contain a notebook or other trinkets. A geocacher hides the object, then logs the longitude and latitude on geocaching.com so others can find it, using a GPS-enabled device.

I've geocached before — I wrote a story about it for Seven Days in 2003. Back then, it required a clunky handheld GPS device. The free geocaching.com smartphone app, with a map and helpful video tutorials, is much easier to use.

But the activity proved harder than I'd remembered. My 8-year-old daughter, Ivy, and I went geocaching one Saturday morning in September. We downloaded the app to my iPhone, chose a code name, WinooskiRez, and watched a tutorial advising us to be stealthy. Secrecy is key: Uninitiated passersby aren't supposed to know what you're up to. They're known as "muggles," like the non-magical people in Harry Potter's world.

Ivy and I looked at the map on the app and picked a pin we could walk to — a microcache along the Winooski River Walk. The app gave it a difficulty rating of 1.5 out of 5, which seemed reasonable. A hint said it was "magnetic." We followed the phone map to the designated zone — the GPS is only accurate within about 70 feet — but we couldn't find the cache.

We searched everywhere, trying not to attract attention from the muggle dog walkers and joggers. "I think I just found it!" Ivy yelped at one point, pulling something from a hole in the ground. "Never mind," she said. "It's garbage."

We gave up after an hour.

We brought her 10-year-old brother, Graham, along for the next two hunts — both caches near our house. All we found was some trash and a dead fish.

I decided we needed some advice, so I called veteran geocacher Peg Rosenau, of Shelburne. A paraeducator at Shelburne Community School who also runs the environmental club, she's lost track of how many geocaches she and her family have found over the last 10 years. "A few hundred," she estimated.

"It is hard sometimes," she admitted. But she said it gets easier over time.

"Your eyes are sort of trained differently after you've been doing it for a while," she told me. Now she sometimes finds caches even when she's not actively looking.

Rosenau said she likes geocaching because it gets her outdoors with her 10-year-old son and 16-year-old daughter: "It's ultimately about being with other people and being outside, noticing the world around you."

She likes to geocache while traveling, because people often hide caches near scenic or historic spots. "It's a great way to check out what the locals already know," she said.

Even so, her favorite cache is a reflector stuck to a guardrail near her house. "Every time I drive by and see it," she said, "I feel like I know a secret."

Rosenau gave me a few helpful tips (see below). The next time we went geocaching, I chose a cache that was farther away but had the lowest difficulty rating — a 1.0. I checked the cache's "activity" on the app and saw that someone else said they had found it "quickly" just a few days before.

We drove to the spot — there was nothing scenic or special about it — and parked near the pin. I spotted a little tunnel, and we used my phone as a flashlight to look inside. Graham saw something.

"I think that's just a rock," he said. But when he pulled it out, he discovered that it was a palm-size container. The bottom slid open, and out popped a plastic bag with a few rolled-up pieces of paper inside. "We actually found it!" he exclaimed. I was as excited as he was.

We added our code name and the date to the list on the paper, then sealed up the cache again. Ivy made sure no one was watching as she tucked it back into its hiding place. She reminded me to log our first find on the app. I suspect it won't be our last.

There's a ton of information on geocaching.com to help you get started. You can also upgrade the free app to a premium version with more features — for $29.99 a year. Veteran geocacher Peg Rosenau says the free version has worked fine for her. She also offers this advice to parents: