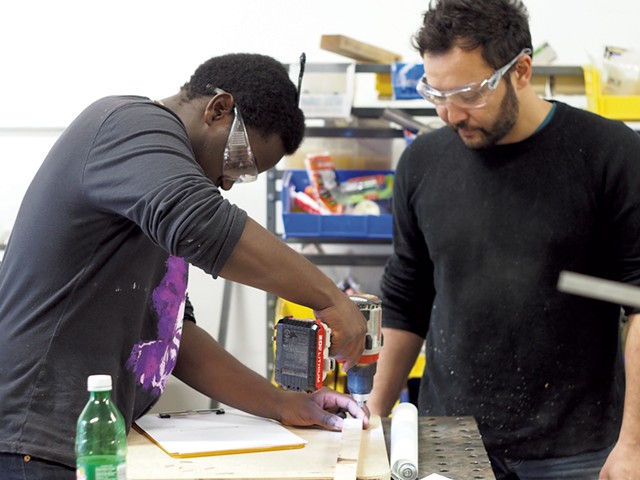 Black, Indigenous and other people of color historically have struggled to overcome institutional and cultural barriers, and careers in STEAM — science, technology, engineering, the arts and mathematics — are no exception.

But now, Generator, the nonprofit maker space in Burlington's South End, has launched the new BIPOC Scholarship program, aimed at bridging that divide and making a range of career opportunities more accessible to these marginalized Vermonters.

Maker spaces are communal design studios, workshops and manufacturing facilities where artists, craftspeople and entrepreneurs gather to share equipment, ideas and expertise. Launched in 2014 in the basement of Memorial Auditorium, Generator moved in 2017 to its current, 12,500-square-foot facility on Sears Lane.

"It's sort of like a gym, but instead of having a treadmill, we have a CNC router, welding equipment, sewing machines and high-end jewelry-making tools," said Generator executive director Meg Hammond.

Setting up a scholarship program for BIPOC and other communities was already on Hammond's to-do list when she joined the organization in January 2020. But the many tragedies last year targeting people of color "elevated the urgency" of launching the program, she explained.

In June 2020, Generator issued a statement of solidarity with the BIPOC community and committed to countering racism and ensuring equal access to its resources. At the time, Hammond said, Generator promised to make social justice a core feature in its strategic plan and to provide diversity, equity and inclusion training to its staff, instructors and board of directors.

Hammond also promised to launch a $100,000 scholarship program that would make Generator's classes and tools more accessible to BIPOC individuals.

Over the next five years, the scholarship program will award a total of $20,000 annually to qualified recipients, who may use the money in several ways, including paying for the cost of classes, tool training and Generator's $95 monthly membership fee.

The scholarship will also give makers a place to work and store materials, tools and unfinished projects, which, as Hammond pointed out, is otherwise impractical for many people from disadvantaged communities, especially those living in apartments. As she noted, many of the 150 members run businesses directly out of Generator.

Hammond has assembled a four-member scholarship selection committee, three of whom self-identify as BIPOC. In addition to herself, the committee includes sculptor Elliott Katz, Generator's operations and facilities director, as well as two members of the BIPOC community from outside the organization. Vera Longtoe Sheehan is director of the Vermont Abenaki Artists Association, and Joe Williams is managing director of Champlain College's Leahy Center for Digital Forensics & Cybersecurity.

As for how the selection committee will determine applicants' eligibility, Hammond emphasized that Generator is not asking for proof of identity, such as photos or tribal membership cards. As she put it, "I'm hoping for honesty and self-identification."

Because this is the inaugural class of BIPOC Scholarship recipients, Hammond has no idea who will apply or what their level of prior training or experience may be. But she sees the program as a work in progress that will be refined over time to better meet the needs of the BIPOC community.

Funding for the scholarships comes from several sources, including the Vermont Community Foundation and Rabble-Rouser Chocolate & Craft in Montpelier.

The deadline for applications is April 7, and the first round of scholarships is slated to begin in May.