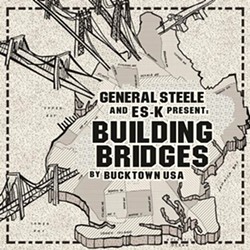 One constant in the ever-changing hip-hop game is the importance of the co-sign. Nothing confers legitimacy on an up-and-coming young artist quite like doing work with established veterans. It's an artistic honor and just plain good business. That's why Vermont producer Es-K's latest project, Building Bridges, is such a landmark achievement. Far beyond the traditional guest verse and photo op, this is a full-length collaboration with New York City rap legend General Steele of Smif-N-Wessun and Boot Camp Clik.

The General brought a lot of talent with him, too. The lineup here is almost absurdly stacked. Features include Rawkus-era beast Shabaam Sahdeeq, Ruste Juxx, Smoothe Da Hustler and Rockness Monsta. There is even a verse from Sean Price (RIP) — widely considered one of the best rappers, period. Fittingly, Building Bridges also showcases young, hungry talents such as Vvs Verbal, who shows up on nine of the 12 tracks here, and Shadow the Great, from the remarkable Loaf Muzik collective.

Make no mistake, though, this is very much General Steele's show. An effortlessly commanding presence on the mic, his verses always impress. At a stage in his career where most rappers would fall back on their reputations, Steele raises the bar with some searing, honest songwriting. He is introspective without being self-indulgent and packs his life experience into sparse, brilliant lines throughout.

Steele's approach clearly sets the tone. The guest appearances are uniformly on point; nobody is half-stepping. Every track is in keeping with the album theme: transcending our circumstances, improving ourselves and building a better future.

Es-K's jazzified boom-bap turns out to be a perfect counterpoint for General Steele's stark baritone flow. (Two of the beats here were produced by Tennessee beatsmith and longtime Es-K collaborator Central Parks; they fit seamlessly.) It's obvious you're listening to technicians who study hip-hop as much as they love it. The flow and sequencing here is flawless.

The mix is dense but crystal clear, laying boom-bap drum programming over musically inventive, constantly shifting instrumentation. Rap performances aside, perhaps the single most impressive aspect of this album is how much subtle complexity is baked into these hypnotic beats.

Building Bridges is a monumental release that represents years of work. Fortunately, it's getting the treatment it deserves. In an era of ephemeral, digital-only "album releases," Es-K and General Steele opted to make the project available on both CD and high-quality vinyl. The vinyl edition showcases the intricate design work of Joe Buck, famous for his iconic De La Soul Is Dead cover.

By virtue of his tireless work ethic and genuine personality, Es-K has been growing his reach and reputation for a while now. Time will tell, but it's hard to believe this album won't be looked back on as his "big break" moment. One thing's for sure: He's done Vermont proud.

Building Bridges by General Steele and Es-K is available November 11 on CD and vinyl at Pure Pop Records in Burlington and online at bucktownusa.com, fatbeats.com, iTunes and Amazon.