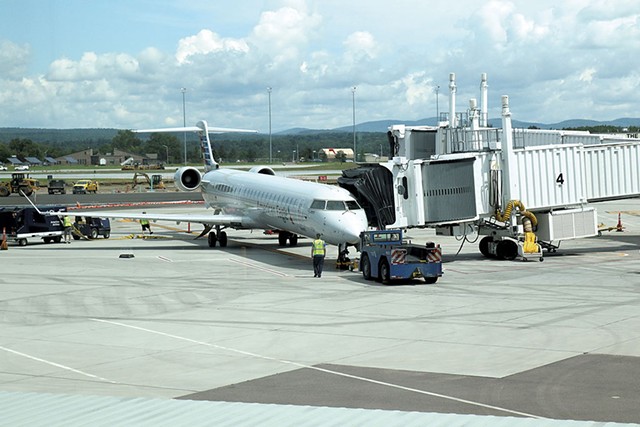 Airline travelers will soon be able to undergo rapid coronavirus tests upon arrival at the Burlington International Airport.

A new agreement will allow a local company to offer COVID-19 tests to paying customers on airport property. Anyone will be able to access the service, but it's geared toward travelers, who will be able to get swabbed and learn results within a few hours, aviation director Gene Richards said.

City officials hope the testing service will reduce the chance that visitors from other parts of the country unwittingly carry the virus into the state.

"One of the highest risks to Vermonters is people coming and going from hot spots," Richards said. "They are people that could potentially bring risk, and they also want to have this service."

It's the biggest push yet in Vermont to provide access to newer, faster tests that public health experts increasingly see as powerful tools to prevent outbreaks and return to economic normalcy. But the service doesn't conform to Vermont Department of Health testing guidelines and cannot be used to replace required quarantine periods for travelers entering the state. As such, it is unlikely to boost the region's ailing tourism numbers.

"One of the highest risks to Vermonters is people coming and going from hot spots." Gene Richards tweet this

Garnet Transport Medicine, an Essex Junction-based company that provides nonemergency ambulance service, will operate in a small, unused building in an airport employee parking lot. The deal, approved last week by the Burlington City Council, promises the airport $2 for every test that Garnet administers.

Within the next few weeks, Garnet plans to begin offering rapid antigen and polymerase chain reaction, or PCR, tests, CEO Ryan Ferris said. Antigen tests are the bigger draw, as they can be analyzed on-site and produce results in as little as 20 minutes.

The company is one of a few in Vermont known to provide antigen tests. Since July, Garnet has used a mobile service to administer tests for private clients, including the Spot on the Dock restaurant in Burlington and Beta Technologies, a tech startup based at the airport that is developing electric aircraft.

The airport site will be Garnet's first stationary location and will be open to airline travelers, airport workers and the general public. Ferris said the company plans to advertise the service inside the terminal. In response to a written question, he did not disclose the specific cost for each test.

Antigen tests are now widely used across the country. The federal government has sent millions of them to nursing homes, and some college football conferences have turned to the quick-result tests to salvage their seasons.

Vermont's experience with antigen tests has been colored by an unusual situation in Manchester, where a private clinic using them reported more than 60 coronavirus cases in July. The state health department tested the same patients — and 1,000 others — with the PCR method, but only four were positive, touching off a still-unresolved debate over what went wrong.

Garnet uses tests made by Quidel, the same company that manufactured those at the center of the Manchester mix-up.

Vermont is one of 15 states that do not count positive results from antigen tests as confirmed COVID-19 cases, according to an analysis by Kaiser Health News. State guidelines released in September recommend antigen testing only for people with symptoms, except in high-risk settings such as nursing homes. The Vermont Department of Health warns that the tests can "produce false positive results when disease prevalence is low."

Not all infectious disease experts agree with that limited approach. Stephen Kissler, a research fellow at the Harvard T.H. Chan School of Public Health, said rapid antigen tests, while not quite as accurate as PCR tests, can help catch cases at the most contagious stage of infection.

"I think the value of the antigen tests in places like airports is that, while imperfect, they will be able to help screen probably many people who come in and might be actively infectious," he said.

The federal Centers for Disease Control and Prevention says air travel itself raises an individual's risk of infection.

"Most viruses and other germs do not spread easily on flights because of how air circulates and is filtered on airplanes," current guidance states. "However, social distancing is difficult on crowded flights, and sitting within 6 feet of others, sometimes for hours, may increase your risk of getting COVID-19."

The risks from cross-state travel, especially through airports, are currently managed through quarantine mandates. Vermont requires that all visitors who arrive by plane sequester themselves for 14 days. They can shorten that time by taking a PCR test after seven days. Antigen tests alone may not be used to shorten the quarantine period, according to the health department.

Quarantine rules have deterred some would-be travelers, including in Vermont, where its lowest-in-the-nation case rate is otherwise a selling point. Only 12,782 passengers arrived at BTV in August, compared to 70,872 in the same month in 2019. The nationwide drop in ridership prompted an airline industry trade group to call last week for mass testing of airline passengers.

"This industry will not recover until we can find an alternative to quarantine," Alexandre de Juniac, CEO of the International Air Transport Association, said at a September 22 media briefing.

The company is one of a few in Vermont known to provide antigen tests. tweet this

Hawaii is trying just that. Beginning next month, the state will waive its quarantine requirement for visitors who can show that they tested negative for COVID-19 within 72 hours of arrival. United Airlines announced last week that it will offer tests to passengers who fly from San Francisco to the island state, making it the first U.S. airline to do so, according to CBS News.

For months, tourism-dependent companies in Vermont have been lobbying state officials to relax quarantine rules, according to Jeff Lawson, vice president of tourism and marketing for the Lake Champlain Chamber. "Our lodging sector in particular is just under siege at the moment," he said. Gov. Phil Scott's administration recently lifted hotel occupancy restrictions, but the state hasn't budged on the quarantine mandate.

"Until those are lifted and changed," Lawson said, "any new approach to assessing and testing is a little bit moot in terms of people traveling to the state."

Burlington Mayor Miro Weinberger said in a statement that he "fully supports" the state's current quarantine requirements. Garnet's test site is "one potential tool to help catch positive cases that may be entering Vermont," he said.

So far, the plan has been developed without input from the Vermont Department of Health — though not for lack of trying, Ferris said.

Garnet's CEO said he emailed an overview of his plan to the state's top health officials in early August. Ferris specifically asked whether someone could take the PCR test his company uses — a variant of the state's version — to shorten quarantine. Ferris said he never heard back.

An uncoordinated approach between the state and the private company would surely have drawbacks. For instance, it's not clear whether departing passengers who receive a positive antigen result would be barred from boarding. Visitors who test negative immediately upon arrival to Vermont, meanwhile, might take quarantine less seriously or be confused about what their results mean. And someone who is infected en route to BTV wouldn't immediately test positive on arrival due to the incubation period for COVID-19.

Ben Truman, a health department spokesperson, declined to comment on Garnet's test site because the department doesn't know details of the company's plan. He said the state advises against solely using a one-time antigen test for asymptomatic people.

Nonetheless, Richards, the aviation director, was sold on the idea after airport tenant Beta Technologies invited him to take one of its antigen tests.

"The biggest thing is being a carrier and not knowing it," he said. "It gave me great relief to know that I was not sick or a carrier."