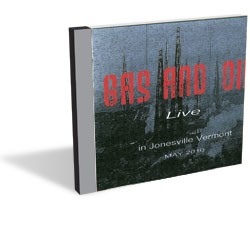 Milton’s Gas and Oil bill themselves as “real hardcore punk from Vermont.” Led by “Beano” Parker, guitarist for VT punk progenitors the Wards, the band certainly has the lineage to back up that claim. Filmed in a garage, the band’s recently released DVD, Live in Jonesville, Vermont, is a grainy, black-and-white snapshot of just how real Vermont punk is. It is a grimy counterpoint to the NPR-listening, Outback-driving, air-brushed, L.L. Bean crowd in the increasingly yuppified Green Mountains.

Following a short intro scene in which Parker blares the latest from Canadian hardcore outfit the Cancer Bats from his car — which may be, ahem, a late-model Subaru — the film cuts to a shot of the middle-aged group standing around in said garage, swilling beers. A jumpy transition later, the band jumps into “Heaven.” The song is a slow, sludgy, metal-tinged stomper. No one will ever accuse Gas and Oil of virtuosity. But Parker unleashes his sinister guitar lines with enough ragged fury to overrule any technical flaws. Drummer Rick “ Stink” Lincoln and bassist Barry “Bear” Mallet match Parker’s intensity with driving, if imprecise, aplomb.

“Doing Life” is next and is a classically punk-styled treatise on, well, a life sentence in prison. Lean, fast and unhinged, it’s an exercise in slobbering punk efficiency. “Trash” continues the punk-rock history lesson, sounding as though it was transported straight from a dingy NYC club in 1976. “Generations” is similarly evocative of punk’s bygone era, but with a generational twist, as Parker ruminates on the promise and, ultimately, the folly of youth, screaming, “It takes 20 years to discover yourself / It takes 20 years to be someone else.”

Exceptionally lo-fi in both audio and video quality, Live in Jonesville, Vermont may not appeal to many beyond local punk aficionados and Vermont music archivists. But watching the aging trio gleefully shred through one two-minute cut after another, you’d hardly get the sense they care what most of us think. As Vermont ski areas build increasingly luxurious resorts, our downtowns increasingly resemble Anywhere, USA, and our airwaves churn out milquetoast, cookie-cutter pop, it’s comforting to know that, somewhere in a garage in Jonesville, “real” Vermont still exists.