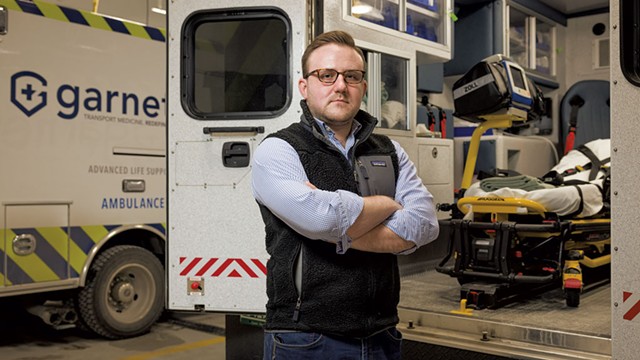 Garnet Health, a Chittenden County ambulance service that has played a major role in Vermont's COVID-19 testing and vaccination effort, will close at the end of the month, citing financial difficulties.

The company's closure coincides with the Vermont Department of Health's decision to shutter its walk-in COVID-19 vaccination clinics by January 31.

In a statement, Garnet president and CEO Ryan Ferris blamed the company's demise on a mix of low reimbursement rates from insurance companies and rising costs of operating an EMS service, which have increased during the pandemic.

"Given the wind-down of COVID-19 services subsidized by the state and federal government, Garnet is left without sufficient revenues to sustain operations and must make decisions to prevent a catastrophic collapse," Ferris wrote in the statement.


Garnet notified the Vermont Department of Labor about its impending closure last week and said that 76 people would lose their jobs, according to deputy labor commissioner Dustin Degree. On Tuesday, Ferris declined an interview through a public relations firm that handles the company's media requests.

Garnet launched in the fall of 2019 on a business model built around transporting patients from one medical facility to another throughout New England and Northern New York. The arrival of the pandemic threatened to tank the for-profit company, according to Ferris, who told Seven Days in 2021 that Garnet lost nearly half its business overnight.

To stay afloat, the company retooled itself as the premiere provider of COVID-19 tests in Vermont, operating two of the state's busiest sites — in Burlington and Middlebury — in addition to providing services to businesses, summer camps and even individuals through a direct-to-consumer testing program. More recently, Garnet has been running a walk-in COVID-19 vaccination clinic at the University Mall in South Burlington.

"We have left no stone unturned in our attempt to secure business to support continued operations," Ferris said in his statement, noting that the company has applied for state and federal grants, public health funding and even a sale. "These efforts have yet to be successful."

He said he plans to reevaluate the company's future once the layoffs are completed, with the hope of eventually relaunching with "a more limited offering of medical services."

"Until then, the company will work with affected employees to help them find alternative employment and do everything possible to ensure a smooth wind-down of the company operations," Ferris wrote.

This story may be updated.