Humans have been growing food for more than 10,000 years, so do we really need an app to show us how to do it? Well, probably. According to the South Burlington-based National Gardening Association, about 39 million households in the United States plant edible gardens, but 20 percent of them give up every year. That’s a whole lot of discouraged gardeners. Jim Feinson, president of Gardener’s Supply, thinks we can do better.

“Gardening’s really fun and easy,” he says, “but we’ve learned from people new to it that gardening can seem intimidating.”

It’s no wonder. Considering all the planting, fertilizing, mulching, weeding, pest control and harvesting, gardening is an information-heavy activity. When you know what to do, it’s fairly simple. Reaching the knowledge threshold, however, takes grit.

Feinson’s solution is called GardenMinder, an app for Apple devices, the Amazon Kindle Fire and the Barnes & Noble Nook that makes gardening about as uncomplicated and inviting as it can be.

Following on the success of the Kitchen Garden Planner on Gardener’s Supply website, the $9.99 app lets you pick from a menu of preplanned raised-bed gardens and walks you through every step, giving how-tos and providing “push notification” reminders along the way. More advanced gardeners can design their own plots, picking from a selection of more than 70 fruits and vegetables.

Gardener’s Supply partnered with another Vermont company, Green Mountain Digital (GMD), to create the app. Known for its birding and fly-fishing apps from the National Audubon Society and Orvis, GMD, located in Woodstock, was a natural choice to design a gardening product. “There’s a pretty big cross section of our existing customer base that also gardens,” notes David Tyler, GMD’s director of strategic partnerships. “Someone who likes to go look at birds very likely is into gardening.”

The two companies started talking to each other about a year ago to see how they might work together. Gardener’s Supply was in the middle of overhauling its website, and GMD took that opportunity to pitch an app that incorporated the new design and added mobile features. “There are certainly other garden-planning apps out there,” Tyler says. “We took a look at the competition and noted what they were doing well and what we could do better.”

What sets GardenMinder apart from the other apps is primarily the know-how from Gardener’s Supply. With years of feedback from hundreds of thousands of customers, 18 test gardens around the country and experts such as Vermont’s Charlie Nardozzi on speed dial, the company is uniquely equipped to provide gardening advice on a national scale.

The app builds on that expertise with an innovative tool: planting schedules based not on hardiness zones but on the first and last frost dates garnered from numerous weather centers in every state. As Vermonters know, frost dates can vary by as much as a month within the same zone, so basing a garden plan purely on zone can lead to failure. “We wanted to make gardening as local as possible,” says author and gardening coach Nardozzi, who lives in North Ferrisburgh and helped write the app. “People are always wondering, What do I do in my backyard?”

To answer that question with more accuracy, Nardozzi and other gardening experts analyzed the frost information and, with GMD’s help, mapped out every gardening task for all the fruits and vegetables in the app. So whether you want to grow rutabaga in Ozark, Ala., or broccoli in Beaver Falls, Alaska, the app will tell you everything from when to start your seeds to when to harvest and get ready for next season. And, in case that’s not easy enough, the app pushes reminders to your mobile device when it’s time to, say, mulch your strawberries or side-dress your winter squash. “The users still may not do it,” Nardozzi admits, “but at least they have the reminder.”

For Carl Ross, who lives in Arizona and downloaded the app after he read a review, the most helpful feature of the tool has been the journaling function. For each vegetable you plant, there’s an option to take notes, add an image and share them on Facebook. Ross, 50, a school psychologist on his way to a master-gardener certification, is using the journal to track his progress. “I’ve tried a lot of gardening apps,” he writes in an email, “but this one looks to have the most potential. The price was a lot for an app, but I think it’s worth it.”

Ross is part of the demographic most associated with gardening fervor, but that’s changing. When Nardozzi gives gardening talks around the country, he’s seeing a lot more twentysomethings in the audience than he used to. “It’s kind of like there are two generations meeting,” he says. Younger people are growing their own food for the same reasons as their forebears — they seek fresh produce and value — but also because they see the practice as a way to address the ills associated with modern agriculture, such as global warming and farmworker exploitation, he suggests.

When it comes to the new generation of gardeners, Nardozzi explains, the passion is there, but the knowledge is lacking. “They didn’t have a parent or a grandparent on the farm showing them how and where things grow,” he says. “Now they’re looking for information not only in books but apps, as well.”

Simple as the GardenMinder app is, one thing it won’t do is curb neophytes’ blind ambition. For those folks, Feinson has some advice. “The smartest thing you can do is be realistic about your time commitment,” he says. “Start small and build from there.” 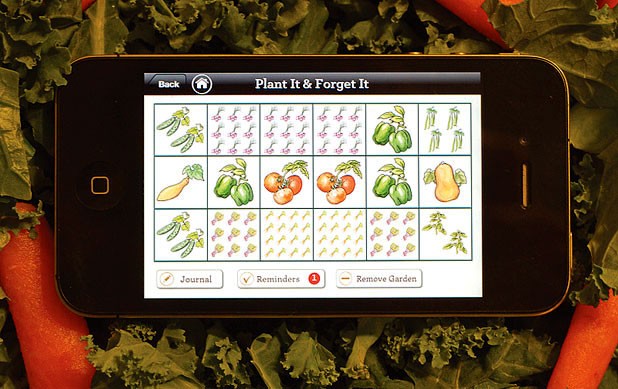