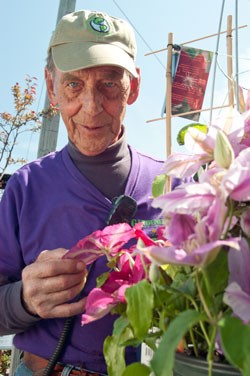 Matthew de Wolf isn’t your typical sales associate; he’s a perennials expert with a fan base. During the 15 or so years he’s worked at Williston’s Gardener’s Supply (previously 4 Seasons Garden Center), his know-how and friendliness have earned him a devoted following.

Over the past several decades, de Wolf, a spirited 82 years old, has seen the landscape business from just about every angle. He was a grower in Massachusetts and owned his own nursery in Manchester, Vt. He’s worked in retail, wholesale and even as a traveling salesman. While studying at the University of Guelph in Ontario, he was head gardener at the governor general’s house.

De Wolf, who has piercing blue eyes, is the kind of charmer who likes to make people guess. When asked about his accent, he counters, “How good is your European geography? North of Belgium, south of Denmark, west of Germany, east of England.”

The answer? Holland. After five unbearable years of German occupation, a teenage de Wolf fled for Canada. The Germans had obliterated his hometown, Rotterdam, at the beginning of World War II. “I can remember it like it was yesterday,” he says. “That’s something you don’t forget.”

In Williston, de Wolf works 20 hours a week in the perennial department — where he’s alphabetized the aisles by botanical names — advising gardeners and sharing stories.

“I get satisfaction when people have gotten what they wanted,” he says. “This is why I keep doing it.”

Seven Days caught up with de Wolf to talk gardening among the flowers.

SEVEN DAYS: What does your typical day look like?

SD: Say I’m a novice gardener. What are some foolproof perennials to get me started?

MDW: Is it sunny or shade? I always ask questions first. What is your soil like? Is it a clay soil, or is it sandy?

SD: Let’s go with partial sun on the clay.

MDW: Well, you could probably use Alchemilla, lady’s mantle. A lot of people like them because this [he points to a leaf cradling a droplet of water] looks like a pearl, especially when the sun hits it.

If the clay is heavy, I usually recommend that you use gypsum, which loosens the soil. In clay, you never plant a taproot. You never put in a peony or a lupine. You can eventually make a decent soil out of the clay soil by adding compost, year after year.

SD: You’ve been doing this for a long time. Have you noticed any changes in the climate, or any new pests?

MDW: Only about five years ago, it came up from down South: the Asiatic lily beetle. This is what you have to watch out for. It’s not even necessarily climate change, but a lot of stuff comes in from overseas. The plants themselves are all being inspected, but they come in on a wooden pallet. Who knows that there’s not a couple of eggs in there? Then they hatch, and, bingo, all of a sudden you have an outbreak.

People are finally beginning to catch on to organic gardening, though. When we were 4 Seasons, we [didn’t use organic methods]. But at Gardener’s Supply, everything is organic, so I had to relearn everything over again.

SD: Show me a perennial that’s particularly difficult to grow.

MDW: A lot of people come in and say, “I’ve had peonies for five years, and it’s a beautiful bush, but no flowers. They planted it too deep. It’s a taproot. The top eye isn’t supposed to be below two inches.

Ants [on peonies] are actually good, because — feel this [bud], it’s kinda sticky. The ants are actually helping to remove this sticky stuff, and it helps the flower to open. You have ants in your peonies, you’re doing fine.

SD: Do you have a favorite plant?

MDW: I’m very fond of Astilbe. I used to have a camp up at Lake Willoughby, and I had a whole patch, all the different colors.

A customer interrupts our interview. She hasn’t seen a bloom on her daffodils since she planted them a couple of years ago.

MDW: The reason might be you’re not getting quite enough sun. Is it deep, dark shade? Have you been fertilizing? Nine out of 10 people don’t realize, when you buy your bulb, the flower is already in there. Now that the plant is using its strength to push that bulb up, that’s when [its nutrients] should be replaced.

SD: What kind of fertilizer should she use?

MDW: Go higher potassium, lower nitrogen. Nitrogen produces vegetative growth; phosphate is the root builder. And the phosphate and potassium combined give you your root and your flower.

SD: Any other words of wisdom for gardeners?

MDW: Use common sense. And don’t be afraid to ask questions. So many people come in and say, “I’ve got a stupid question.” There are no stupid questions. You are stupid if you don’t ask. You show intelligence by wanting to learn.

And don’t be embarrassed. Hey, I’m still learning. There’s constantly something new to be learned.